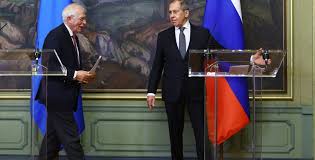 After his trip to Moscow, EU foreign affairs chief Josep Borrell believes ties between Europe and Russia have hit a new low. But bilateral relations have yet to hit rock bottom, says Christian F. Trippe.

The attempt to get EU-Russia relations back on track has failed. There’s no other way of assessing the outcome of the discussion between EU foreign policy chief Josep Borrell and Russian Foreign Minister Sergey Lavrov.

The press conference after their talks on Friday was a lesson in hubris and failure. At times, Borrell came across as a cornered, ill-prepared schoolboy. Lavrov is notorious for not giving his negotiating partners an inch, but this time he even managed to rob Borrell of his political dignity.

The Russian foreign minister called the European Union “unreliable,” said Germany and France had been “arrogant” toward Russia and had refused to hand over important information to elucidate the case of opposition activist Alexei Navalny, and accused verdicts concerning Catalan separatists in Spain of being politically motivated. These were just some of the allegations and lies showered on Borrell. The EU’s top diplomat responded in a friendly manner and said nothing — but only a controlled, angry outburst of would have succeeded in stopping Lavrov’s tirade.

As this tragic performance was taking place in public, Russia’s Foreign Ministry added insult to injury by expelling three EU diplomats for allegedly participating in protests against Navalny’s imprisonment. The EU states in question — Germany, Sweden and Poland — have condemned the move, insisting it is unjustified. Borrell, for the record, also registered his protest at the move — in writing.

By Friday afternoon, it was absolutely clear that the EU envoy’s mission had failed miserably. However, he still had a few hours left in Moscow — time to at least do something, such as meet with Navalny’s allies or at least set the record straight in public. He could also have chosen to take an earlier return flight; an abrupt end to his visit would have sent out a clear signal.

Even before his descent into diplomatic hell, skeptics had questioned the purpose of his trip. For some, Navalny’s imprisonment was reason enough to cancel. They pointed out that the Kremlin had the advantage and that Borrell, with very little leverage, risked being shown up. They were right. This is perhaps the biggest shambles in the EU’s history of diplomacy, which admittedly is not very old.

There will be consequences when the EU fundamentally reconsiders its strategy toward Russia in a few weeks. The Kremlin clearly does not want a relationship based on the principles of fairness and equality.

If only out of self-respect, Brussels will have to restrict itself to uncontroversial issues of interest to both sides: trade, energy supplies, curbing the COVID-19 pandemic, activities in the civil society. This is hardly insignificant, but much less than might be possible.

Moscow has plainly rejected the olive branch that Borrell extended so demonstratively. Some EU states put on the brakes when there was talk of new sanctions to protest the Navalny case. Now that Borrell has returned empty-handed from Moscow, these sanctions will be inevitable. We haven’t yet hit rock bottom.

This article has been translated from German