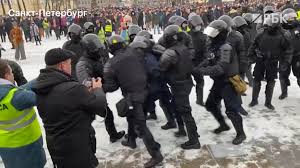 As Russia braced for a second weekend of protests on January 31 and the opposition reeled from consecutive days of law enforcement raids and arrests, a pro-Kremlin YouTube channel published a dispatch from inside a Moscow training base for riot police officers tasked with dispersing demonstrators on the streets of Russia’s capital.

Two lines of blue-uniformed members of the OMON force are shown standing before an archway flanked by the Russian eagle and the Moscow coat of arms, heads bowed as they receive instructions from a superior.

“The country is watching you,” the man says, his voice echoing through the long corridor. “It’s not proud of them,” the protesters, he says. “It’s proud of you.”

What follows is a video montage showing the coordinated police operation that unfolded across Moscow on January 31, the frantic clips playing out against a soundtrack of hard-rock music and laudatory commentary by presenter Semyon Pegov.

But the protesters themselves would witness very different scenes across Russia. On a day that saw a record of more than 5,600 arrests, videos taken in multiple cities would attest to a brutal crackdown and a level of seemingly wanton violence that few Russians have seen during President Vladimir Putin’s 21 years in power.

In footage from Kazan, people cower on the snow-covered ground before law enforcement officers who scream orders at them. In Moscow, a journalist is tased and beaten by several men as he’s led away to a waiting police van. In St. Petersburg, an unconscious man is dragged into a police van not long after OMON members march a column of detained activists, hands over heads, through the city’s streets.

The men who executed the violent operation to clear Russia’s streets wore helmets and metal shields and came equipped with batons, stun guns, and other punitive equipment. The protesters they took on were largely peaceful, sometimes flinging snow or resisting arrest.

The level of force deployed on January 31 appeared to signal an escalation in the authorities’ campaign to stamp out the protest movement, which was sparked by the jailing of opposition politician Aleksei Navalny following his return to Russia and was fueled by authorities’ rejection of demands that he be released.

Apparently fearing a repeat of the large turnout on January 23, police set up checkpoints and cordoned off parts of Russia’s main cities, significantly undermining protesters’ ability to gather in a single place. A chunk of Moscow close to the Kremlin was inaccessible, with barriers up and subway stations closed.

When tens of thousands of people nonetheless came out, law enforcement moved to pick off activists one by one, frequently using truncheon blows and electric shock batons to incapacitate detainees.

“The political instruments the Kremlin traditionally uses have stopped working. Propaganda is losing its effect,” Putin’s former speechwriter Abbas Gallyamov, now a political analyst, told RFE/RL. “They have no strategy.”

In neighboring Belarus, when autocratic leader Alyaksandr Lukashenka claimed a landslide victory in an August election many voters contend was rigged, an unprecedented wave of protests was met with a similar response.

Extreme police violence, thousands of arrests, and the alleged torture of numerous detainees have not quelled the protests, but Lukashenka remains in power almost six months after the bitterly disputed vote. Leading opponents who were not forced out of the country are in jail.

But the price, analysts say, was a further drop in Lukashenka’s legitimacy and his further ostracization by the West, even as Russia helped shore up his position. Now, with the growing influence in Russia of the Internet, which enables open debate in contrast to one-sided coverage on television, Putin’s government may have opted for intimidation as a way of stopping events from spiraling out of its control.

“Something important is happening before our eyes,” analyst Andrei Kolesnikov, a senior fellow at the Carnegie Moscow Center, wrote on Twitter about Russia’s protests. “The regime is overreacting and in the process it is undermining the foundations of its authority over and support within society as a whole. That is the key lesson of what happened in Belarus last year.”

To the extent that Russian authorities have justified the use of violence to disperse demonstrators, it has been with reference to the law, which forbids any form of political street gathering not authorized in advance by the state.

Navalny and his allies have balked at filing requests for permission to protest, having been repeatedly rebuffed in the past, and rights activists say the state abuses the permit system in order to muzzle opponents, violating the freedom of assembly. But people who take to the streets despite that face arrest and hefty fines just for participating.

“We’re talking of illegal events,” Kremlin spokesman Dmitry Peskov told reporters on February 1. “There can obviously be no negotiations with hooligans and provocateurs.”

Further restrictive legislation has raised the stakes of opposition in recent months and significantly narrowed the space for dissent, handing the Kremlin the upper hand even as Russians complain about falling real wages and a worsening economic outlook.

Caught between the prospect of suffering police beatings on the streets or hoping for things to stabilize, many are opting for the former. But the increasingly harsh methods appear calibrated to make sure they stay home.

“Our patience is limited, but we’re willing to listen. If that doesn’t work then we will increase the dose of our vaccine,” an officer tells Pegov in the pro-Kremlin video, in a euphemistic reference to the use of violence. “And some people will get a stronger injection than others.”