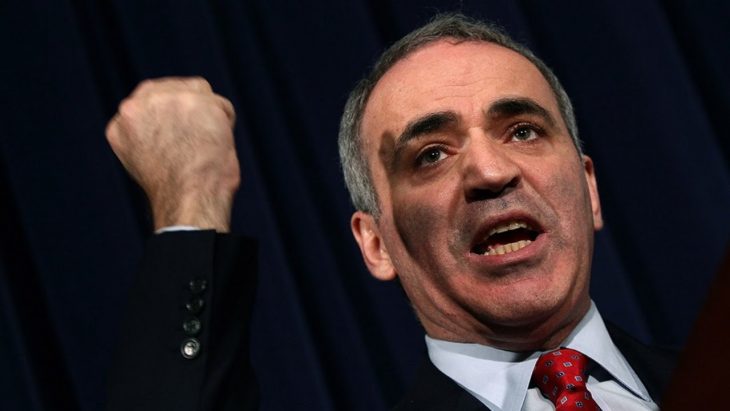 Putin is an aggressive cancer requiring decisive intervention. After years of bashing Trump’s devotion to him, it’s time for Biden and Democrats to deliver.

Despite the vicious winter cold and the even more vicious police, Russia erupted in protest on Jan. 23. Over 100,000 came into the streets and plazas across the country to heed the call of Alexei Navalny, the anti-corruption activist who has become the leading opponent of Russian dictator Vladimir Putin.

Navalny was arrested immediately after returning to Russia from Germany, where he had been taken for treatment in a coma after a well-documented attempt on his life by the Russian security services. Navalny was technically arrested for a parole violation based on spurious charges, but his real crime was failing to die — exposing both the murderousness and the incompetence of Putin’s regime.

Russians came out to protest to heed Navalny’s call, inspired by his personal bravery in returning to Russia. They are also simply fed up. For the young people who make up much of Navalny’s support, Putin has been in charge for their entire lives.

Rally the free world against Putin

The largest demonstrations across Russia in a generation were met by 4,000 arrests at last count. The only violence was by the police, who attacked protesters with clubs and grabbed them off the street indiscriminately — including Navalny’s wife, Yulia. Some protesters threw snowballs at the armored riot police, a comic but symbolically potent display of resistance.

I’m gratified that so many Americans are following these historic events in Russia, but it is wrong to equate the state violence of a dictatorship with that seen in infamous cases in the United States. There is a vast difference between police brutality as a scandal and a crime in America and how it’s rewarded in Putin’s Russia as official policy.

Navalny has been effective because he focuses not on politics or high-flown rhetoric about human rights, but on the endemic corruption that enriches Putin and his cronies while the rest of Russia stagnates. The day after his arrest, Navalny’s organization poured more fuel on that fire by releasing a two-hour video exposé about a huge palace on the Black Sea that all evidence points to being built for Putin. Estimated to cost well over $1 billion — and protected from air, land and sea by Russian security forces — there’s no other plausible explanation. Its scale and opulence are beyond the dreams of the czars. It’s no wonder that Donald Trump admired and envied Putin so much, considering that Mar-a-Lago wouldn’t be fit for servant’s quarters at Putin’s palace.

Navalny has been moved to the Matrosskaya Tishina jail where lawyer Sergei Magnitsky was killed in 2009 for exposing official corruption. If his name sounds familiar, it’s from the “Magnitsky Sanctions” that have become a potent weapon for targeting individuals who violate human rights. Thanks to the global campaign of Bill Browder, Magnitsky’s employer, these targeted sanctions are becoming a widespread way to deter and punish the agents and allies of some of the world’s worst regimes.

Now those sanctions may help save the life of another anti-corruption crusader, but only if they are used promptly and aggressively. The Biden administration has distinguished itself from the Trump administration with strong language to Russia about respecting the rights of Navalny and the protesters, but Putin is a mafia boss, not a typical national leader. He looks at these statements by Western governments for just two things: his own name and who is talking. If it doesn’t name him personally, he knows he can ignore it. If it’s not from the head of state, he knows it’s not serious.

Putin and President Joe Biden had their first call Tuesday, and initial reports said the new president “pressed” Putin on Navalny, among other things. But unless there are real consequences to deter him, Putin considers such tough talk to be nothing more than posturing for the U.S. domestic audience. Biden has a chance to prove him wrong.

Biden was elected to be a custodian, to bring calm and order to the many Trump messes. But with Russia, Biden can mark his place in the history books by rallying the free world to finally stand up to Putin’s dictatorship.

China is a long-term strategic challenge with no quick solutions. Putin is an aggressive cancer requiring decisive intervention. Europe has been dithering without American leadership, and Biden must change that.

The answer is the same it has always been: Follow the money. When Putin wakes up, he doesn’t check the international news or the diplomatic cables. He looks at his offshore bank accounts, and those of the oligarchs who could rise against him should he finally prove too toxic to their profits.

Crack down on Putin and his elite

After Navalny was arrested, his team released eight names to add to the sanctions lists. If the West is finally going to get serious about stopping Putin before his next invasion, his next cyberattack and his next assassination attempt, that list should be on top of Biden’s desk. Freeze their accounts, seize their assets and stop confusing Putin’s interests with Russia’s interests. We do not ask for “foreign interference,” only for the free world to stop interfering in Putin’s favor.

With Putin gone, the bloody regimes of Syria, North Korea, Belarus and Venezuela would all shake. Biden can lead a new order for democracy, one that should have been formed at the end of the Cold War, when instead the free world celebrated and squandered its advantage, believing that history was over.

On June 13, 2013, I joined my colleague Boris Nemtsov in Washington, D.C., when he gave testimony to the Senate Committee on Foreign Relations. A former deputy prime minister under Boris Yeltsin, Nemtsov was the leader of our fragile opposition coalition. He spoke about the bright future of a strong, democratic Russia that would be a part of the civilized world, not a pariah. He emphasized the need for sanctions against Putin’s elite.

At the end, Arizona Sen. John McCain, long a friend and ally, teased Nemtsov for looking at his watch. “Boris, pay attention!”

We all laughed, and Boris made his flight to Moscow, while I took the advice of his mother, who told us both to stay away. On Feb. 27, 2015, Boris was gunned down in front of the Kremlin.

Now Alexei Navalny has gone back to face Putin and to fight for a free Russia from a cell. He deserves more than the “grave concerns” expressed in routine government news releases. The Democrats spent four years bashing Trump’s strange devotion to Putin. Now it’s time to put Putin’s money where their mouths are.

Garry Kasparov, a former World Chess champion, is chairman of the Renew Democracy Initiative and the Human Rights Foundation. Follow him on Twitter: @Kasparov63