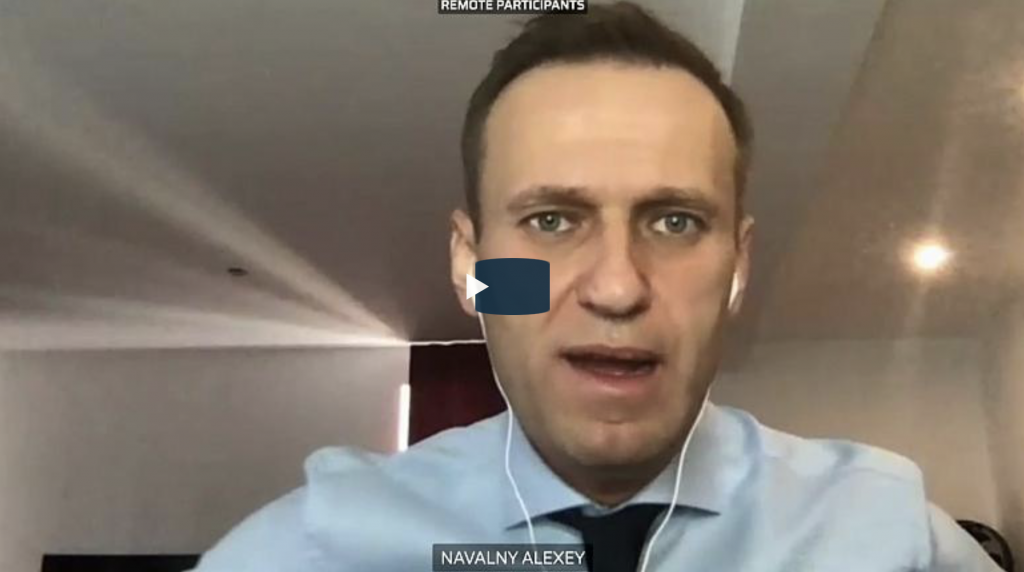 Europe should target Vladimir Putin’s inner circle with direct sanctions because they are “a bunch of criminals” temporarily in power, Russian opposition leader Alexei Navalny has told MEPs.

He said travel bans or asset freezes on senior Russian officials would not be taken seriously so long as they do not also focus on the richest oligarchs.

Navalny is in Germany, where he was treated in hospital after collapsing in August on board a flight to Moscow from the Siberian city of Tomsk.

Laboratory tests subsequently confirmed he had been poisoned with a nerve agent.

“I’m definitely not the first one and unfortunately I will not be the last one who [is] poisoned or killed or treated in this way.”

The Kremlin has repeatedly denied he was poisoned in Russia.

Navalny called for stronger European sanctions against senior Russian business figures, saying they would be supported by 99% of the Russian people.

“The main question we should ourselves why ask ourselves [is] ‘why are these people are poisoning, killing and fabricating elections?’ and the answer is very, very simple: money,” he said.

“So [the] European Union should target the money and Russian oligarchs, and not just old oligarchs but also new ones like the circle of Mr Putin, they must be real targets of sanction.

“Let me say it very straight: until the most expensive yacht of Mr [Alisher] Usmanov standing in Barcelona or Monaco, no-one in Russia or Kremlin even, they will not treat European sanctions seriously.”

He added: “They are a bunch of criminals who temporarily took over the power in our country.”

Navalny is a long-standing critic of Usmanov, a billionaire tycoon with stakes in businesses including the Kommersant publishing house and the MegaFon mobile telephone network.

The Russian opposition leader also said next year’s elections to the country’s national parliament, the Duma, would be a critical moment.

He said fabrication and falsification of results was “inevitable” and that the focus should be on ensuring every willing candidate is not preventing from standing in the election.

Asked by MEPs whether he felt he could operate safely from outside the country, Navalny said that he planned to return to Russia soon.

“My current plan is recovery and then go back to Russia to act from inside, so I’m not even trying to develop ways to act from abroad,” he said.

Source: www.euronews.com
News
UK sanctions Russian airlines to prevent them selling landing slots 19 May 2022
Putin involved in war ‘at level of colonel or brigadier’, say western sources 19 May 2022
Vladimir Putin has said that by abandoning Russian energy supplies, Europe risked paying the most expensive energy prices in the world. 17 May 202217 May 2022
Opinion | How to Reinvigorate NATO and Deter Putin’s Aggression 17 May 202217 May 2022
Brussels plans to help EU countries confiscate assets frozen by sanctions 11 May 202211 May 2022
See all news
Home / News / Target ‘bunch of criminals’ around Putin with sanctions, Navalny urges Europe
© 2018-2022 The database “PUTIN'S LIST”