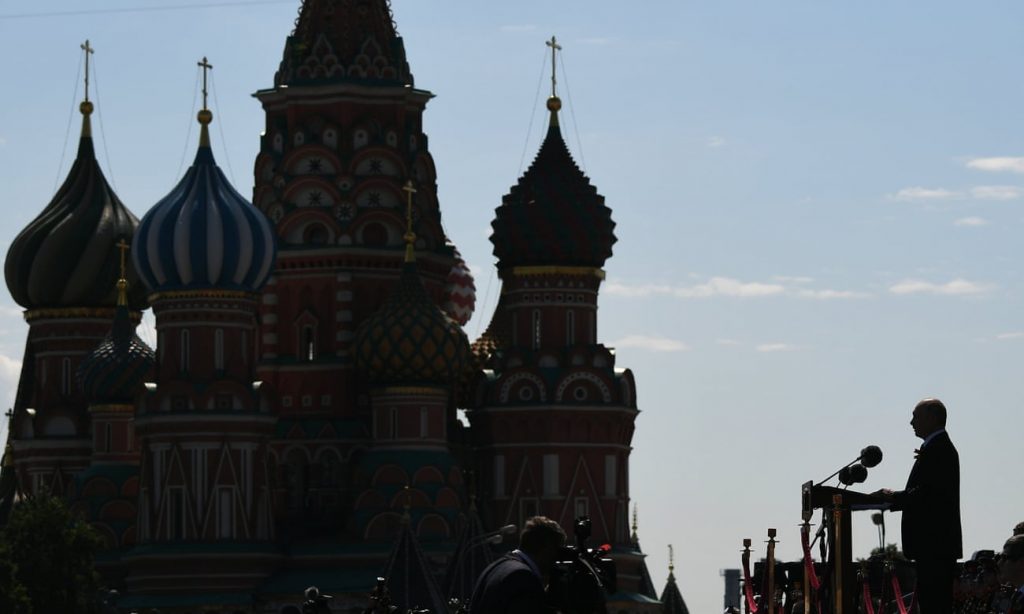 ts assassins stalk the streets of western towns and cities; its online troll farms poison the political bloodstream of democracies; its hackers force their way into the servers of political parties and multinational institutions to discredit them; its operatives covertly finance the campaigns of extremists and demagogues. In Luke Harding’s Shadow State, Moscow is Mordor, the seat of a baleful power that reaches out to corrupt, menace and destroy.

Harding’s impassioned indictment of the Kremlin’s nefarious machinations abroad in recent years is wide-ranging and well researched. He combines the findings of the Mueller inquiry, western intelligence reports, the revelations of the investigative website Bellingcat, and his own formidable sleuthing to produce a detailed and compelling account of Russia’s efforts to subvert liberal democracies and project its own power and influence. Many of the key episodes Harding narrates – the Skripal poisoning in Salisbury, the hack of the Democratic National Committee servers in 2016, claims of collusion between the Trump administration and the Putin regime – have been extensively reported, including by Harding himself for the Guardian, but the book ties them into a pattern of aggressive and reckless interference in western societies. Moscow is waging an “unofficial war” against the west and its security services are a “deadly shadow monster, on the rampage”.

The Kremlin’s attempts to subvert western institutions and political systems might be real enough, but its power to do so should not be exaggerated. True, the Russian security services got lucky with the hack of the DNC servers, and the subsequent scandal benefited the Trump campaign. But, as Harding himself details, Russia’s other covert operations abroad have been a litany of bungling that has only damaged its international standing and degraded the power of its security services.

The Skripal poisoning is a case in point. The two grainy figures captured by CCTV on their way to poison Sergei Skripal were swiftly identified as assassins sent from Moscow and subsequently unmasked by Bellingcat as colonels in the Russian intelligence service, the GRU. Their fake passports helpfully carried consecutive serial numbers and their cars were discovered to be registered to GRU headquarters. Bellingcat then trawled through widely available Russian passport and vehicle licence databases and identified the passport details, dates of birth and, in many cases, mobile numbers of some 305 individuals who were probably GRU spies.

The Kremlin attempted to rebut the accusations by broadcasting an interview with the GRU officers – who were still claiming to be regular businessmen – on the Kremlin’s “news” channel RT. Their halting explanation of their desire to see the “wonderful city” of Salisbury only confirmed their obvious culpability. The diplomatic backlash against the poisoning was coordinated and robust; country after country threw out “cultural attaches” from Russia’s embassies, limiting Moscow’s ability to conduct espionage and subversion. As Harding notes: “An agency known for its ruthlessness and professionalism during the cold war now gave the impression that it was incompetent and bungling, a shambling golem, lethal and dopey.”

Harding amasses convincing evidence to show how in 2016 the Kremlin reached out to tip the electoral scales in Trump’s favour, though in an election decided by 107,000 votes in three states, every factor was decisive. Denouncing Russian interference in the US election as the reason for Trump’s victory ignores the deficiencies of the Clinton campaign and the ways in which Trump successfully plumbed deep wellsprings of economic distress and political disaffection in the US that had been neglected for years, if not decades.

In office, Trump might have proved an asset to the Kremlin, but that doesn’t mean he is a Kremlin asset. His fawning over strongmen and dictators is not confined to Putin. Although his denigration of the EU and Nato undoubtedly delights Moscow, Trump’s disdain for multilateralism is a matter of longstanding record, not a Russian initiative.

What Shadow State actually shows is that the current occupant of the Oval Office is more of a threat to the institutions and values of liberal democracies than any of the cyber-intrusions, fake news, dirty cash and chemical agents emanating from Russia.

The Kremlin’s real power to interfere in western states lies in the readiness, documented by Harding, of our own politicians, bankers and lawyers to embrace the advantages and rewards that Russia’s emissaries offer and to turn a blind eye to the costs attached. The Johnson government continues to sit on a (presumably unflattering) report into Russian influence on UK politics completed last October by Parliament’s intelligence and security committee.

Still, for disappointed liberals and internationalists, Mordor exerts a dark fascination. The greater Putin’s responsibility for Trump, for Brexit and for the surge of nativism and populism across Europe and the US, the smaller the responsibility to be shouldered by the complacent defenders of the globalised status quo. If Sauron did not exist, he would need to be invented.

• Shadow State: Murder, Mayhem and Russia’s Remaking of the West is published by Guardian Faber (£14.99). To order a copy go to guardianbookshop.com. Delivery charges may apply.