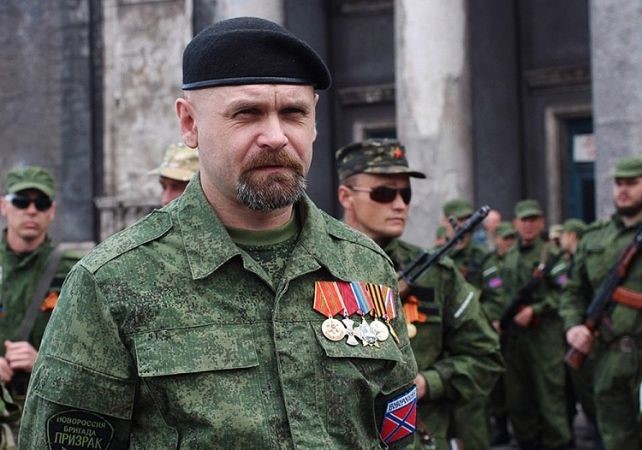 There is silence in Russia’s proxy Donbas ‘republics’, and consternation from Russian World fanatics over the exposure of one of the supposed Donbas “heroes”, to whom monuments have been erected, as a criminal who gunned down a whole family for money. What is most galling is that the information cannot be dismissed as “Ukrainian propaganda” as it comes from a ‘court’ in the self-proclaimed ‘Luhansk people’s republic’

Alexei Mozgovoy (Ukrainian Oleksiy Mozhovy) was a militant commander of the ‘Prizrak’ [‘Ghost’] armed formation during the first year of the war in Donbas.  Among the very many reasons for his notoriety in Ukraine was his participation in a ‘people’s court’ which essentially delivered ‘death sentences’ through a show of hands.  He was killed in an ambush in May 2015 which militants from the self-proclaimed ‘Luhansk people’s republic’ have claimed was the work of Ukrainian saboteurs. In fact, there have been a suspiciously large number of violent deaths of Donbas militants, including some that happened in Russia, and there are other versions as to who was behind them.  Whoever was behind the killing, Russia, its proxy ‘republics’ and all those who support Russian World / Novorossiya ideology have been unanimous in treating him as a hero.

It was an ‘LPR court’ that got in the way.  Denis Kazansky, a well-known journalist and blogger, has tracked down the ‘sentence’ which exposes both Mozgovoy and another founder of Prizrak, Alexander Kostin.  The latter was also fairly notorious for his promise to seize Kyiv, and then Alaska, and for his claims to be “fighting from Holy Rus”.

Kostin was arrested in 2018, and recently sentenced to 14 years’ imprisonment for looting, armed robbery and murder.  The ‘court’ sentence states that Mozgovoy was not also charged “in view of his death”, but the charges against Kostin applied to Mozgovoy as well.

The horrific murder of a family in May 2014 was widely reported in government-controlled Ukraine, but as Kazansky notes, there were stories of horror every day.  The Russian propaganda media remained silent about what looked like a mistake.

It was no mistake, although the militants who ambushed and shot at the two cars heading towards the Russian border in the evening of 13 May 2014 had been told that a convoy of Ukrainian ‘Right Sector’ fighters was expected.  In fact, it was 37-year-old Oleh Burykhin, 42-year-old Iryna Burykhina and their 10-year-old daughter Liza.  It seems that one of the militants found the child, still alive, and called for an ambulance.  She survived, but with serious injuries which have made her an invalid for life. Her parents were killed on the spot, as Mozgovoy and Kostin had planned.  Burykhin was a well-off businessman dealing in coal, and the two ‘commanders’ had learned that the family were fleeing from the war to Russia with carloads full of money, etc.  This was premeditated murder of a family, with the claims about ‘Right Sector’ an overt lie from the outset.  Not the stuff that Russian propaganda is made of, and there has been no mention of the ‘trial’ in the Russian media, nor in the so-called ‘Luhansk and Donetsk republics’.

It is quite likely that Kazansky first heard of Kostin’s sentence from another source –pro-‘Russian World’ / militant sites and from former militants, especially those from Russia who went to Ukraine to kill Ukrainians and who are trying to claim that the shocking details about their ‘hero’ Mozgovoy are ‘lies’, attempts to discredit the ‘insurgents’, “overt provocation”, etc.

Kazansky has devoted a separate video blog to the attempts by former militants and Russian ‘nationalists’ to retain their ‘hero’ Mozgovoy.  He draws attention, in particular, to an article whose title openly acknowledges that “a blow against Mozgovoy” is a blow against all of those whom they try to treat as ‘insurgents’ and defenders of Donbas.  For those with the stomach for it, the entire text can be found here.

The author quotes Alexander Zhuzhkovsky, a Russian with Nazi views who believed both “Ukraine and Ukrainians need to be destroyed”. In the text, he is described as “a volunteer, an insurgent and the author of the book ’85 days of Sloviansk’, “who is finishing a biography of Mozgovoy”.  Zhuchkhovsky says that he can accept that there may be different versions about the Burykhin killings, but refuses to acknowledge “the right to exist” of any suggestion that this was a conscious robbery”, although that was precisely the conclusion of a ‘court’ which he supposedly recognizes.

His outpouring after this is truly chilling. “What happened in May 2014, with all regret for the people who died, was merely an insignificant episode against a background of historical events.  There were hundreds of such episodes in Donbas: ‘friendly fire’, when they shot at their own by mistake; the death of civilians who found themselves in the firing line intended for the enemy; people held ‘in cellars’ and the execution of people mistakenly identified as ‘ukropy’ [Ukrainians] and so forth. Such are the excesses and side effects of an armed battle in which a huge number of people with weapons and a low level of military professional are involved. There’s nothing you can do about this”.

Kazansky is surely right, that Ukraine scarcely needs its own methods of demonstrating the crimes of the Russian and pro-Russian militants, which the latter invariably dismiss as ‘propaganda’.  You need only wait for them to come forth themselves, admitting, often virtually boasting of war crimes.