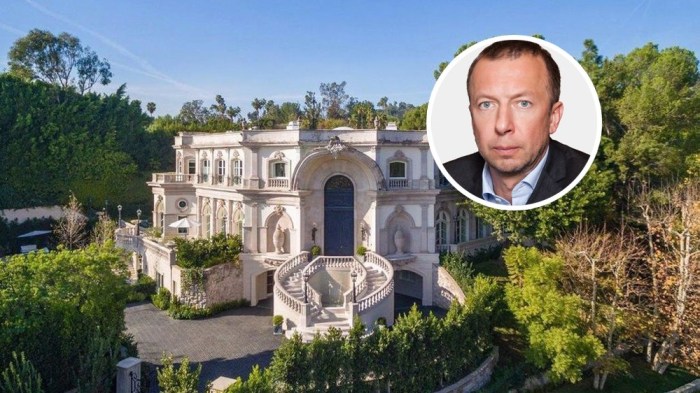 Back in the late ’80s, married Russian immigrants Leonid and Natalia Glosman purchased a prime lot in Beverly Hills, Calif., upon which to build a residential monument to their financial success. But the couple — founders of a family-owned dental practice with multiple offices scattered across L.A. — soon saw their American dream morph into a classic country club nightmare, with angry, pitchfork-wielding neighbors attempting to block the “looming” and just plain “wrong” project. Natalia Glosman bit back, declaring that “this is worse than Russia. This is a dictatorship of the neighbors.”

Years later, the Glosmans’ adult daughter Monique Vayntrub recalled that neighbors were furious mostly because the home’s style “is not customary in the neighborhood” and “the height was much higher than the rest of the homes.” And indeed, the modern-day tribute to Versailles towers high above the surrounding houses, its fanatically embellished, almost gothic architecture flaunting a brazen showiness that’s markedly unusual, even for Beverly Hills.

In the end, of course, the Glosmans prevailed, and the 15,000 sq. ft., three-story manor was completed in the early 90s.

More than two decades later, after raising their children on the property, the couple put the property on the market for $18.95 million, and were once again met with harsh criticism. Curbed featured the house, shaming it with snarky remarks like “amazingly awful” and a “monument to overconsumption built in the face of NIMBY tyranny.” Readers were even less civil, leaving rude comments: “[It’s] a west side mausoleum for the walking dead,” “Cocaine is a hell of a drug,” and “Oh my Putin!”

But once again, the Glosmans got the last laugh. Faced with buyer rejection, they yanked the property off the market and initiated a top-to-bottom contemporary remodel of the home. Though the exterior remains essentially unchanged, the interiors are now remarkably different — mostly clean-lined, trendy and free from excessive glitz. In 2018, the couple put the property back up for sale, asking $35 million.

Last October, the house shocked onlookers when it sold for $30 million in an all-cash deal — $11 million more than the Glosmans were asking in 2013 and one of the biggest sums ever paid in this particular pocket of Beverly Hills.

As it happens, the buyers — shielded behind an LLC — are also Russian. They are powerful businessman Dmitry Bosov and his fashionista wife Katerina, a hardcore fan of haute couture. Bosov controls the Siberian Anthracite company, Russia’s largest producer of coal and the world’s largest exporter of ultra-high-grade anthracite (among other precious metals.) According to Forbes, he has amassed a personal fortune of $950 million.

Inspired by the San Carlo alle Quattro Fontane in Rome, the new Bosov estate’s architecture admittedly does a decent impersonation of a baroque cathedral upon first glance. A gated and camera-watched driveway leads into a spacious motorcourt, and the pizza delivery person will be awestruck by the opulence of the entryway, where twin limestone exterior staircases curve around, meeting at a landing before the towering front door. Molded architectural flourishes are everywhere — no crack or cranny is overlooked — and the .69-acre hilltop lot additionally includes two wee patches of grassy lawn and a plunge pool with inset spa.

Inside, spaces include a living room with a vaulted ceiling and gilt-trimmed chandelier, a family room adjacent to a wet bar set in its own rotund room, a vaguely medieval library with a marble fireplace, and a gourmet kitchen with a restaurant-worthy array of pricey stainless appliances. There are no fewer than eight bedrooms and twelve bathrooms, and dozens of French doors open to various parts of the gardens. Outside, an array of mature trees and thick hedges surround the corner-lot property, imbuing the house with some much-needed privacy, though the structure is so tall and bulbous that it’s all but impossible to completely shield from public view.