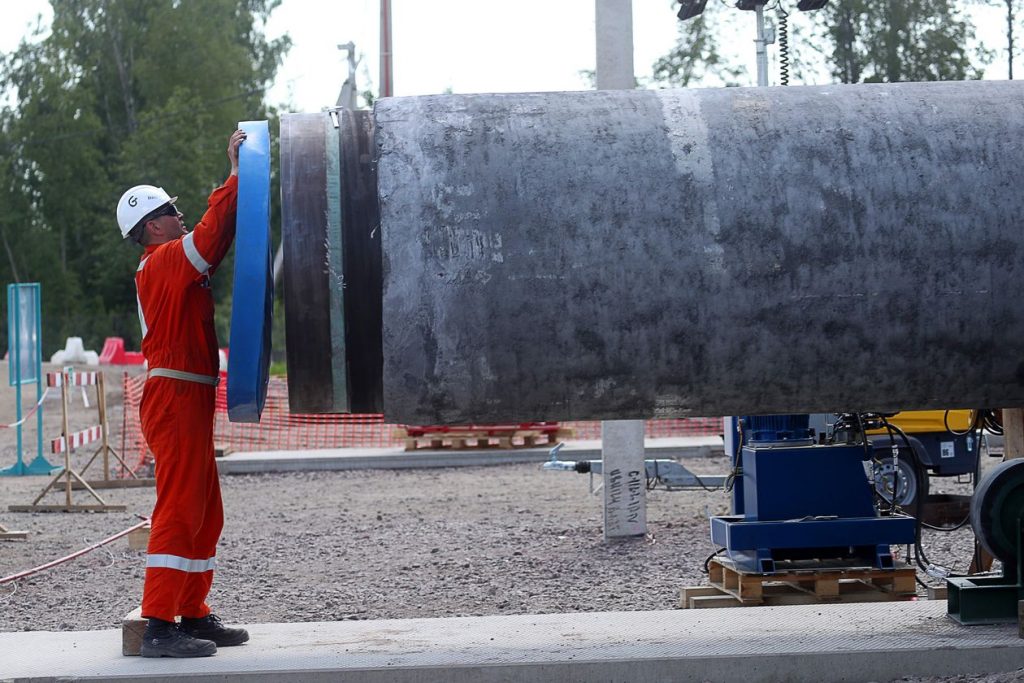 BERLIN—U.S. sanctions have temporarily stopped the construction of a pipeline that is set to increase the flow of natural gas directly from Russia to Germany under the Baltic Sea.

The sanctions would target all businesses and individuals participating in the construction of the pipeline and would effectively cut off those companies from doing business in the U.S. or with U.S.-linked companies. Washington has long opposed the project on grounds that it would increase Germany’s and Europe’s dependence on Russian energy and boost revenues for the Kremlin.

Allseas Group SA, the Swiss-based contractor that is building the pipeline on behalf of a consortium headed by the Russian state-owned energy giant Gazprom, said it would suspend activities on Saturday, hours after President Trump signed a bill that included a provision to unleash sanctions targeting any entities working on the subsea link.

The $10.5 billion Nord Stream 2 pipeline, which runs parallel to the existing Nord Stream pipeline and will double the capacity for direct Russian gas exports to Germany, has long caused tensions between Washington and Berlin.

Chancellor Angela Merkel said in parliament last week that she would raise the sanctions with Mr. Trump as the pipeline was of strategic importance for Germany and Europe.

“The federal government rejects such extraterritorial sanctions that affect German and European companies and interfere in our internal affairs,” a spokeswoman for Ms. Merkel said in a statement issued in reaction to the stoppage of the work on the pipeline.

Senior aides to Ms. Merkel said that the chancellor and Russia’s President Vladimir Putin had been in touch over the sanctions. Those people said that they expected Russia would finish the pipeline despite the setback caused by the sanctions.

Russia’s Foreign Ministry said Saturday that Washington’s sanctions wouldn’t stymie Russia’s economic projects and Moscow would move ahead with the natural-gas pipeline regardless of the U.S.’s intended obstacles. In a statement, the Russian officials accused Washington of seeking to force its pricey liquefied gas on Europe and stall the development of Europe’s economy while undermining its ability to compete.

“As a result, Europeans will lose on all fronts,” the statement said. “Washington decided that it shouldn’t spare anyone, even its closest allies in NATO, for the sake of its geopolitical ambitions and commercial profit.”

Allseas, a global leader in offshore pipeline construction, said it would stop work on the project in compliance with U.S. legislation.

Its ships Solitaire and Pioneering Spirit, the largest construction vessel in the world, will remain in the area but are no longer laying the pipes, a spokesman for Allseas said. He added that as of Thursday, when work ceased, the project was about one month from being completed.

Jens D. Mueller, a spokesman for Nord Stream 2’s parent company, said that the pipeline would be finished despite Allseas pulling out its fleet.

“Completing the project is essential for European supply security. We together with the companies supporting the project will work on finishing the pipeline as soon as possible,” Mr. Mueller told the Journal.

The pipeline is expected to boost trade relations between Russia and Germany and help turn Germany into a hub for gas exports in Europe.

In preparation for the sanctions, Gazprom has retrofitted its own ships as well as ships belonging to Russian contractors that don’t do business outside Russia and would therefore be immune to American sanctions, according to one official of the company who spoke on the condition of anonymity.

One contractor already involved in the project is the Russian subsea-pipeline construction firm MRTS JSC, a company that operates ships which could be used to complete the pipeline, according to Gazprom.

Gazprom is the majority owner of the pipeline, which has financial backing from five European companies: Austria’s OMV, the Dutch-British Shell, France’s Engie, and Germany’s Uniper and Wintershall.

Should the sanctions be expanded to western companies in the Nord Stream 2 consortium, Gazprom would buy out their stakes in the project and insulate the project from sanctions, the Gazprom official said.

David Bryson, Uniper’s chief operating officer, said the company was in contact with the German government regarding the sanctions. “Nord Stream 2 is an important project for gas security in Europe. We have declining sources in Europe, but increasing demand,” Mr. Bryson told the Journal.

The U.S. sanctions were a flagrant violation of international law, Kremlin spokesman Dmitry Peskov said Wednesday, but that they wouldn’t prevent the completion of the pipeline.

“We expect that this project would be completed,” Mr. Peskov said.