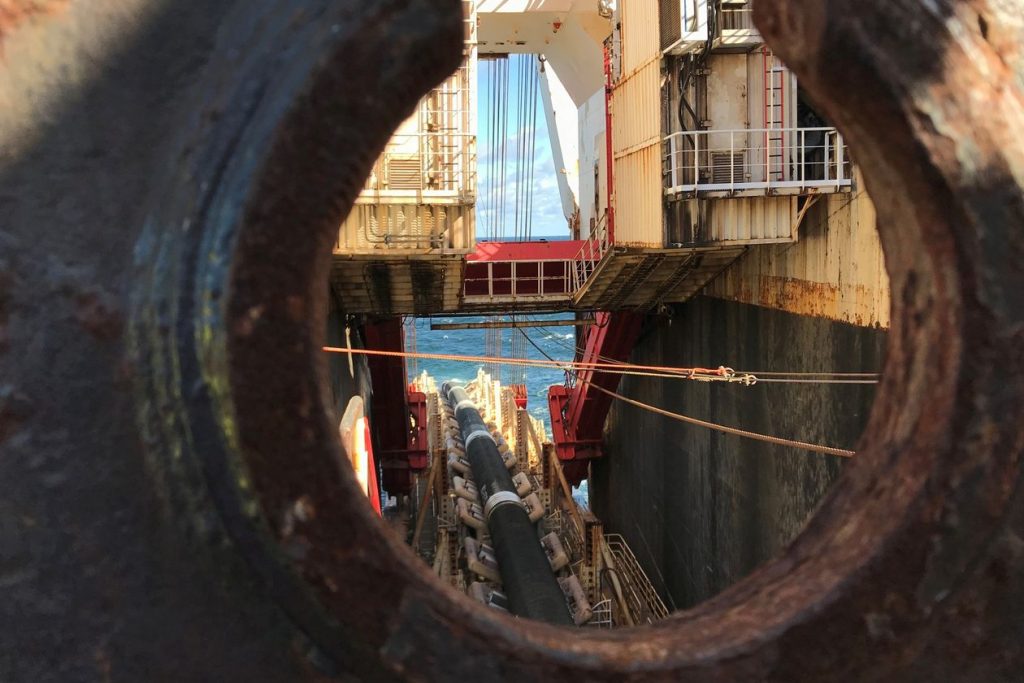 U.S. lawmakers are pushing ahead with enactment of new sanctions meant to prevent the completion of a new pipeline constructed to carry Russian natural gas to Germany, beneath the Baltic Sea.

The measure could set back one of Europe’s largest energy deals for the Nord Stream 2 pipeline, which U.S. lawmakers view as a geopolitical gambit by Russia to strengthen its grip on European energy markets.

However, the sanctions, which are directed at the companies providing pipe-laying services to the pipeline, might further strain relations between the U.S. and Germany, which has lobbied against the action.

Provisions imposing the sanctions are included in the $738 billion 2020 National Defense Authorization Act, an annual Department of Defense policy bill that frequently serves as a catchall for measures unrelated to defense.

The House approved the bill on Wednesday, with a Senate vote to follow. The bill would then go to the White House.

Among other provisions, the bill authorizes 12 weeks of paid parental leave for all 2.1 million civilian federal workers, a historic measure likely to win over some Democrats upset that other preferred provisions—including a prohibition on using defense funds to build a border wall with Mexico—didn’t make it into the final version of the legislation.

Wow! All of our priorities have made it into the final NDAA: Pay Raise for our Troops, Rebuilding our Military, Paid Parental Leave, Border Security, and Space Force! Congress – don’t delay this anymore! I will sign this historic defense legislation immediately!

40.3K people are talking about this

“All of our priorities have made it into the final NDAA: Pay Raise for our Troops, Rebuilding our Military, Paid Parental Leave, Border Security, and Space Force! Congress—don’t delay this anymore! I will sign this historic defense legislation immediately!” President Trump wrote on Twitter on Wednesday morning.

The bill also calls for creation of a sixth branch of the military, the United States Space Force, to replace the current Air Force Space Command, but would remain under the Air Force. The bill authorizes $72.4 million for startup costs.

Lawmakers tempered earlier calls for more aggressive sanctions against Moscow and Turkey, among other countries.

Sen. James Risch (R., Idaho), chairman of the Senate Foreign Relations Committee, called the gas pipeline sanctions provision “highly targeted” and said that he and the bill’s supporters hoped the bill is enacted in time to halt construction.

U.S. officials and lawmakers have asserted Nord Stream 2 will allow Gazprom, Russia’s gas-export monopoly, to all but abandon the Ukrainian transit system that has handled most Russian gas deliveries to Europe for decades.

The $10.5 billion Nord Stream 2 will run parallel to the existing Nord Stream pipeline and double the capacity for gas shipped directly from Russia to Germany to 110 billion cubic meters.

U.S. officials worry that the pipeline will weaken Ukraine’s geopolitical leverage in its struggle with Russia and allow Moscow to dictate political terms across the continent. German and Russian officials have countered that it is a commercial venture advancing energy security for Europe.

Ordinarily, the call to sanction the pipeline would fall to the Trump administration.

The Treasury Department can act under a 2017 law enacted to impose sanctions on Iran, North Korea and Russia, known as the Countering America’s Adversaries Through Sanctions Act, or CAATSA. But Treasury Secretary Steven Mnuchin made no move to do so, spurring Congress to act this year.

Sen. Ted Cruz (R., Texas), a co-sponsor with Sen. Jeanne Shaheen (D., N.H.) of the Senate’s earlier Nord Stream 2 legislation, said in a statement that the bill, if signed into law, will safeguard Europe’s energy security and prevent Russia from obtaining billions of dollars “that could be used to fuel Russian aggression.”

Ms. Shaheen said that the sanctions provision “sends an unmistakable, bipartisan message from Congress to Vladimir Putin that the United States will not sit idly by while the Kremlin seeks to further spread its malign influence.”

Gazprom and the parent company of Nord Stream 2, along with German Chancellor Angela Merkel’s government, have long been prepared for the possibility of U.S. sanctions, said German officials and representatives of the Russian energy giant.

A senior German official said that the project was nearing completion and would continue despite the sanctions.

The bill requires a State Department report within 60 days identifying companies and individuals providing deep-sea pipe-laying services for Nord Stream 2 and for TurkStream, another Gazprom pipeline constructed to transport gas from Russia to Turkey.

The bill allows for the revocation of U.S. visas and the blocking of property of these individuals. It also gives 30 days to those targeted by the sanctions to wind down their operations.

A State Department official said that this report could be delivered to Congress in less than a week, allowing sanctions to take hold in a compressed time frame. “We’re going to move quickly,” the official said.

To build the pipeline, Gazprom is using the Swiss-based contractor Allseas Group SA, which has deployed its vessel Pioneering Spirit, the largest construction ship in the world, to the Baltic Sea to complete the tube’s final offshore stretch.

A Gazprom representative said that the company needed about five weeks to complete the offshore section of the pipeline, for which the role of Allseas is of crucial importance.

The Gazprom representative said that the company would finish the work itself should Allseas be forced to leave the project, retrofitting its own ships as well as ships belonging to Russian contractors.

“We will complete the pipeline one way or another,” the Gazprom official said. “The sanctions, if they come, will only delay the construction and make it more expensive. But they are not going to kill it.”

An official at Naftogaz, Ukraine’s national oil-and-gas company, estimated that Gazprom would be able to develop the technology only in a matter of years, and at great expense.

—Lindsay Wise, Ian Talley and Nancy A. Youssef contributed to this article.