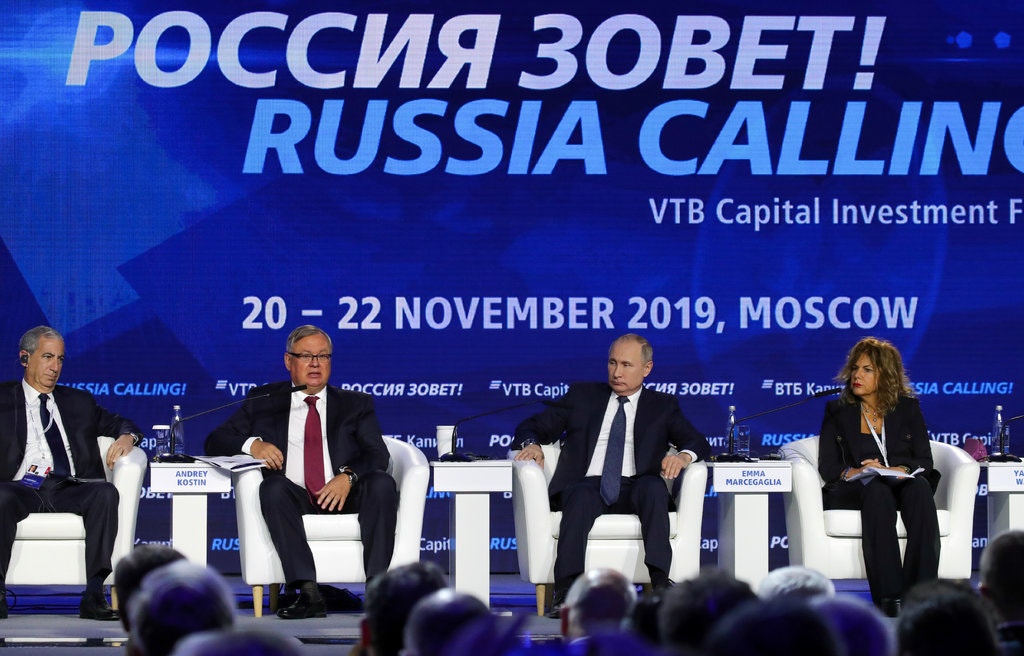 MOSCOW — The video opens with a plaque on a bench in New York’s Central Park: “Don’t forget we are of the same blood. I LOVE YOU.”

The apparent Russian-taxpayer-funded romance behind the plaque, as documented by the opposition leader Aleksei A. Navalny in a 29-minute video posted online on Monday, has become Russia’slatest viral story about the ruling elite’s intermingling of public funds with personal pleasure.

A reporter for Russian state television, Nailya Asker-Zade, has long been dating Andrey L. Kostin, the chairman of Russia’s second-largest bank, the government-owned VTB, according to Russian news reports. In the video, Mr. Navalny accuses Mr. Kostin of showering Ms. Asker-Zade with gifts so lavish that they seemingly could only have been paid for out of government coffers — a $4 million mansion, a 200-foot yacht and $470,000 in private jet flights in one month alone.

Ms. Asker-Zade, for her part, contributed at least $10,000 to the Central Park Conservancy, according to the organization’s 2015 annual report. That contribution — the minimum threshold in Central Park’s Adopt-a-Bench program — appears to have paid for the plaque highlighted by Mr. Navalny, which says it is for “Andrey Kostin” from “Nailya.”

Subscribe for original insights, commentary and discussions on the major news stories of the week, from columnists Max Fisher and Amanda Taub.

“Putin’s rule means shamelessness and degradation,” Mr. Navalny intones at the end of the video, which is produced in his populist, mocking and fast-paced style. “Each of us must do our own small part to fight it.”

By Tuesday, about 24 hours after Mr. Navalny posted it, the video had risen close to the top of YouTube’s Russian “trending” list and drawn more than 2.5 million views — a success even by Mr. Navalny’s standards. His clips documenting official corruption regularly draw audiences in the millions.

YouTube and most other popular platforms remain freely accessible in Russia. But Mr. Navalny published the video on the same day that Mr. Putin signed legislation that augurs a further clampdown on freedom of speech: a law that allows Moscow to declare as “foreign agents” people who publish anything online while receiving funding from abroad.

“If you get a dollar from ad monetization on YouTube, you’re a foreign agent!” a popular Russian blogger, Aleksandr Gorbunov, wrote on Twitter. “If you donate more than $10,000 to New York’s Central Park, you’re a Russian patriot!”

Mr. Navalny is Mr. Putin’s loudest domestic critic, with a nationwide network of supporters that has allowed him to stage coordinated street protests across the country. His slickly produced videos speak to Russians’ anger about inequality and hypocritical, thieving officialdom. He interspersed his tally of Ms. Asker-Zade’s wealth with Russian state television reports soliciting donations for children in need of expensive medical care.

Polls show Russians’ dissatisfaction with Mr. Putin rising over the last year and a half, and flash points of protest have popped up across the country. In one apparent sign of the Kremlin’s nervousness, the authorities have raised the pressure on Mr. Navalny’s network in large-scale raids and searches in recent months.

“We don’t know about this investigation,” the Kremlin spokesman, Dmitri S. Peskov, said on Monday when asked about Mr. Navalny’s video. “As a result, we can’t comment on it at all.”

The government-run news agencies RIA Novosti and Tass published articles on Mr. Peskov’s response, Google search resultsshow. By Tuesday, those articles were no longer accessible on the agencies’ websites.