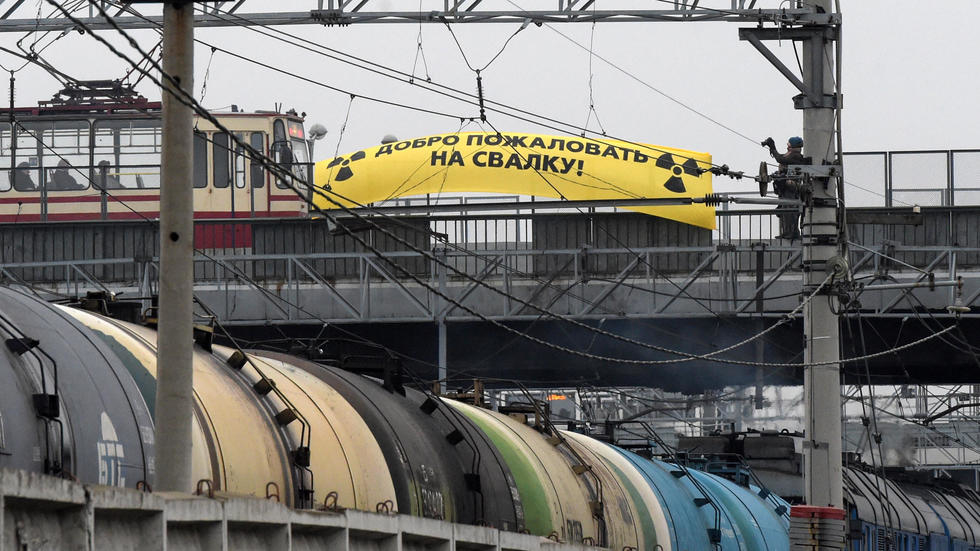 Activists from Russian Greenpeace on Thursday protested against the resumption of imports of depleted uranium, after a shipment of 600 tonnes arrived from Germany at a Saint Petersburg port.

Campaigners hung a banner reading “Welcome to the dump yard” on a bridge over the railway leading from the Ust-Luga port outside Russia’s second largest city.

The cargo from Germany containing some 600 tonnes of depleted uranium sent to Russia by European company Urenco arrived in the city on Tuesday and is set to be loaded on a cargo train and sent to Novouralsk, in the Urals, according to the environmental group.

Greenpeace maintains that the cargo is hazardous and calls it “nuclear waste”.

“The substance is dangerous. It seems that for Urenco, it’s more practical to send it to Russia than to store it (in Germany), but it will impact future generations of Russians,” campaigner Rashid Alimov told AFP.

Russia has a history of bringing in hazardous byproducts of uranium enrichment from European countries, and the practice had come under criticism before.

In 2010 activists in France blocked a train transporting depleted uranium to Russia. French nuclear group Areva ultimately halted shipments — which under its contract was to be re-enriched and shipped back — citing a commercial dispute.

Russia’s nuclear corporation Rosatom has not publicly explained the contents of the latest cargo shipment but confirmed to a local lawmaker that the material was arriving in Russia via the Ust-Luga port.

The latest shipment was earlier blocked by activists for several hours on German territory, as it was transported by rail to a port in the Netherlands on its way to Russia.

In a letter to environmental group Bellona, Rosatom said depleted uranium is “not considered nuclear waste” and is imported into Russia “for enrichment rather than storage” after which it is re-exported.

Greenpeace however argues that Russia already has about a million tonnes of uranium enrichment byproducts, called uranium “tails” in Russia, held in open storage and enriching it is unrealistic and unprofitable.

Russia has four facilities to store the imported material, called uranium hexafluoride or “hex”, and Greenpeace warned there are risks of containment failure.

Several small protests against the import of more depleted uranium took place at the weekend in other Russian regions.