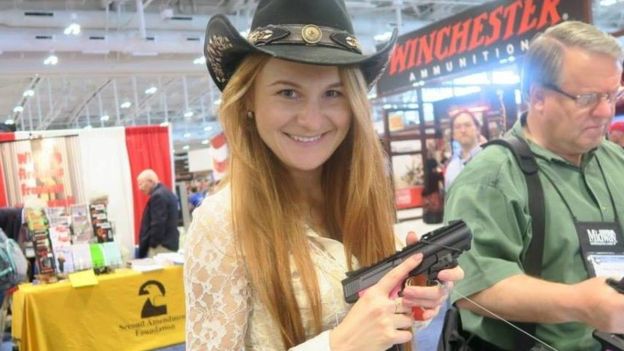 A Russian pro-gun activist, who was jailed in the US after admitting to acting as an agent and infiltrating US political groups, has been deported.

Maria Butina, 30, tried to infiltrate the National Rifle Association (NRA) to influence policy, and was sentenced to 18 months in jail.

She was freed from a Florida prison on Friday, and arrived at Moscow’s Sheremetyevo airport on Saturday.

The Russian government has described the case against her as “fabricated”.

On arrival, Butina was met by her father, and some journalists who gave her flowers.

She told reporters: “Russians never surrender”, adding that she was “very happy to be home”.

She also thanked Russia’s diplomats and foreign ministry, and Russian citizens who wrote letters on her behalf.

Who is Maria Butina?

Butina is said to have been a weapons enthusiast since childhood, and went on to be involved in politics and promoting gun rights – including founding a Russian lobby group called the Right to Bear Arms.

She travelled back and forth to the US for NRA conventions, and in 2015 she attended a Donald Trump campaign event in Las Vegas, asking the presidential candidate about his views on US sanctions on Russia.

In 2016, she moved to the US on a student visa to study for a masters degree at American University in Washington DC.

Butina was arrested by the FBI in July 2018 and charged with acting as an agent of the Russian Federation “without prior notification”.

Why was she charged?

The charge largely stemmed from her links to one of her gun group’s members, Alexander Torshin – an influential former member of the Russian Senate and deputy chairman of the Russian Central Bank who officials said she was directed by and worked with.

Mr Torshin has been put under sanctions in the US and has been investigated over allegations he funnelled money to the NRA to gain influence in US conservative politics.

According to the FBI, in 2015 Butina emailed to US Republican lobbyist Paul Erickson – whom she reportedly dated and lived with – a project proposal called “diplomacy”. It centred around using NRA links to influence the Republican Party’s foreign policy and their traditionally hostile stance toward Russia.

Earlier this year Republicans in the US Federal Election Commission (FEC) blocked further investigation of Mr Torshin and alleged illegal funding to the NRA from Russians, prompting criticism.

Butina initially pleaded not guilty to the charge against her, but later admitted her guilt as part of a plea deal in December 2018.

Although unnamed in the plea deal, Mr Torshin was clearly the unnamed Russian official she admitted to working with to pursue backdoor channels of communication to American conservatives who could influence US politics. He has never been charged.

During her sentencing hearing, Butina expressed regret at her actions, telling the court: “I destroyed my own life.”

Despite the prosecutor’s claims that she had damaged US national security, Butina maintained she had no intention of harming the American people.

Vladimir Putin described her jailing as an “outrage”, and the Russian embassy in the US said on Thursday: “We really hope that the hardest phase of the Russian woman’s life will end… we want her to be reunited with her nearest and dearest as soon as possible.”