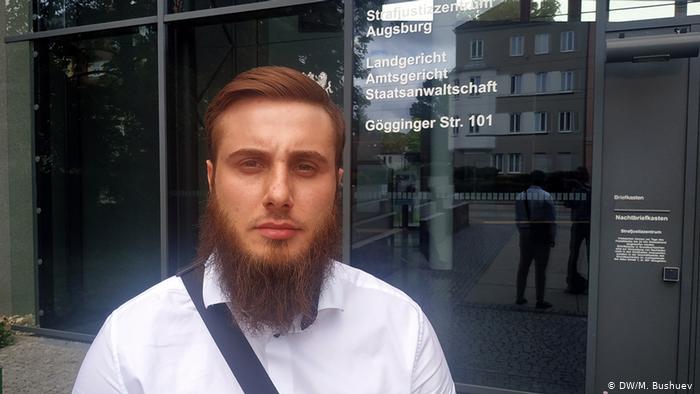 A family from Chechnya has been denied asylum in Germany, despite death threats in their home country. Now they are to be deported to Russia, but human rights experts say they will have to fear for their lives there.

Chechen Mokhmad Abdurakhmanov and his family are facing deportation to Russia. Together with his wife, his son — who was born in Bavaria — and his mother, he has been fighting for asylum in Germany since 2017. So far, the family has had nothing but disappointment.

Germany’s Federal Agency for Migration and Refugees (BAMF) is not convinced that he and his family face retribution should they be deported. The court hearing the family’s first appeal upheld the BAMF decision. It was not until the case was sent to a higher court that judges admitted the threat of persecution in the family’s home country was real. Thus, the court determined the family should seek safe haven in Russia. Yet, human rights advocates claim the family will be in danger in Russia as well.

Read more: Russia still lives in the shadow of the Chechen war

Mokhmad’s older brother Tumsu Abdurakhmanov is a well-known blogger and a harsh critic of Chechen President Ramzan Kadyrov. He was forced to flee the Russian Federation after getting into trouble with Chechen authorities in 2015. The blogger tells DW that the problem arose with his beard: He says he is a religious person and was stopped on the street because of it. Tumsu says he was then taken into custody and interrogated. He claims his arrest was orchestrated by Islam Kadyrov.

At the time of Tumsu’s arrest, Islam Kadyrov, who has been described by the media as a relative of authoritarian Chechen strongman Ramzan Kadyrov, was head of the presidential administration. Ramzan Kadyrov has ruled Chechnya since 2007, during which time many of his critics have either disappeared or turned up dead.

After his interrogation, Tumsu fled the country. In his absence, criminal proceedings on terrorism charges were initiated and an international arrest warrant was put out for him. Chechnya’s judicial system is not considered independent.

When Tumsu fled, so did his brother Mokhmad and his family. First they sought asylum in Georgia. When it was denied, Tumsu tried his luck in Poland, while Mokhmad and his family applied for asylum in Munich. “The main reason [for exile — editor’s note] is my brother’s conflict with the authorities and the Chechen principle of collective accountability. Had we, as his relatives, remained there, we would have faced serious punishment,” Mokhmad tells DW.

Yet, gaining asylum in the EU has turned out to be more difficult than the brothers anticipated. So far, Polish authorities have been unwilling to grant Tumsu permanent residency status, though his appeal has made its way to the country’s Supreme Court. “As far as I know, that is my last chance,” Tumsu tells DW.

It is unclear if the BAMF decision in Germany took into consideration the fact that Magomed Daudov, an influential Kadyrov confidant and chairman of Chechnya’s parliament, used his Instagram account to issue a death threat on Tumsu in March 2019. Such a threat is something that must be taken very seriously in Chechnya — not only for the targeted person, but their entire family.

It is also possible that a court decision against Mokhmad may have negatively influenced his asylum status. Recently, the Augsburg Administrative Court fined him €1,350 ($1,428) for reposting a DW article on Facebook — a verdict that enraged the German Association of Journalists (DJV). The article featured a third-party photo of a group of Islamic militants wearing caps with the “Islamic State” insignia, wielding assault rifles. “I don’t know who supplied what and where, but those are Kalashnikov rifles in the photo,” Abdurakhmanov wrote in his post. The court found that by reposting the article, Mokhmad had broken a law on the online dissemination of prohibited symbols. The title image is automatically linked to the article when one reposts it.

The verdict is not yet binding and Mokhmad is not giving up hope that he may yet be granted asylum in Germany. On September 26, he filed a second asylum application in the southern German city of Bamberg. A few days ago, his mother did the same.

They hope this time decision makers at BAMF will weigh both old and new findings as well as the very real threat that faces those who oppose the Kadyrov regime — outside the country as well as within. On August 23 of this year, the murder of a Chechen in Berlin made international headlines. The victim, Zelimkhan Khangoshvili, had been a field commander in the second Chechen war against Russia.

German parliamentarians: Deportation to Grozny not an option

Meanwhile, the story of 24-year-old Mokhmad, who is now active in Vayfond, an opposition non-governmental organization (NGO), has made its way to the German parliament. In early September, the Left Party parliamentary group submitted a letter of inquiry to the federal government regarding the asylum situation in Chechnya.

“When German authorities expel a Chechen opposition member to Russia for safe haven it borders on cynicism,” Green Party Parliamentarian Manuel Sarrazin told DW. He criticized judges and decision makers for willingly closing their eyes to the existential threat that exiled Chechens would inevitably face there, adding: “Critics of the Kadyrov regime must fear for their lives in every corner of the unjust country that Russia has become.”

“Unfortunately, death threats are carried out in Chechnya,” Social Democratic Party (SPD) Parliamentarian Frank Schwabe told DW. Schwabe was recently in Chechnya, as a European Council rapporteur on the human rights situation in the North Caucasus. He says German authorities need to recalibrate their approach to the deportation of Chechens. “When it comes to Chechnya we are making life and death decisions. Those who get in the crosshairs of the government there don’t have a chance. That is something that everyone making decisions here in Germany must be fully aware of,” he explained.

The respected Russian human rights group Memorial, an NGO with a wealth of experience in Chechnya, is also championing Mokhmad’s case. The group criticized German authorities’ approach, saying, “European proclamations of high standards and principles do not stand up to reality.”

When contacted by DW for a statement, BAMF said that it maintains a policy of not discussing individual cases.