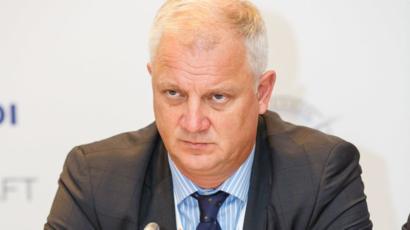 A Russian defense industry executive has been arrested in Italy at the request of the United States on charges of attempting to steal trade secrets from a unit of General Electric based in Ohio.

Aleksandr Korshunov, 57, an employee of the Russian state-owned United Engine Corp and a former Foreign Ministry official, was detained at an airport in Naples on August 30, the U.S. Justice Department said in a statement on September 5.

Korshunov and Maurizio Bianchi, the former director of an Italian division of GE Aviation, are accused of hiring former GE employees to prepare a technical report on jet-engine accessories using the U.S. company’s intellectual property, according to the criminal complaint that was unsealed on September 5.

GE Aviation is one of the world’s largest suppliers of civilian and military aircraft engines. It completed the acquisition of an Italian manufacturer of aviation components in 2013.

U.S. President Donald Trump spoke with Italian Prime Minister Giuseppe Conte on September 5, the day the arrest was made public. The two men discussed “bilateral relations,” according to the White House, which gave no further details.

The Russian Embassy in Washington said its diplomats visited the State Department, where they lodged a “decisive protest” over Korshunov’s detention, calling it “illegitimate” while demanding the “immediate withdrawal” of the extradition request.

The United States alleges that from 2013 to 2018, Korshunov had Bianchi hire current and former employees of GE Aviation’s Italian subsidiary for jet-engine consulting work.

Any patents or intellectual property produced during the course of their consulting work were to belong to Russia, the Justice Department said, citing the employees.

“Throughout the consulting, employees allegedly used trade secrets owned by GE Aviation to create the technical report,” the statement said.

Korshunov allegedly “arranged and paid for employees to meet with him in June 2013 at the Paris Air Show in Le-Bourget, France, and in 2014 in Milan, Italy, to discuss and revise the technical report,” read the complaint.

United Engine produces engines for military and civil aviation as well as for Russia’s space exploration programs. United Engine is currently working on the PD-14 engine that is primarily designed for the MC-21 jet liner.

The company is owned by state defense holding Rostec. United Engine and Rostec are both on the U.S. sanctions list.