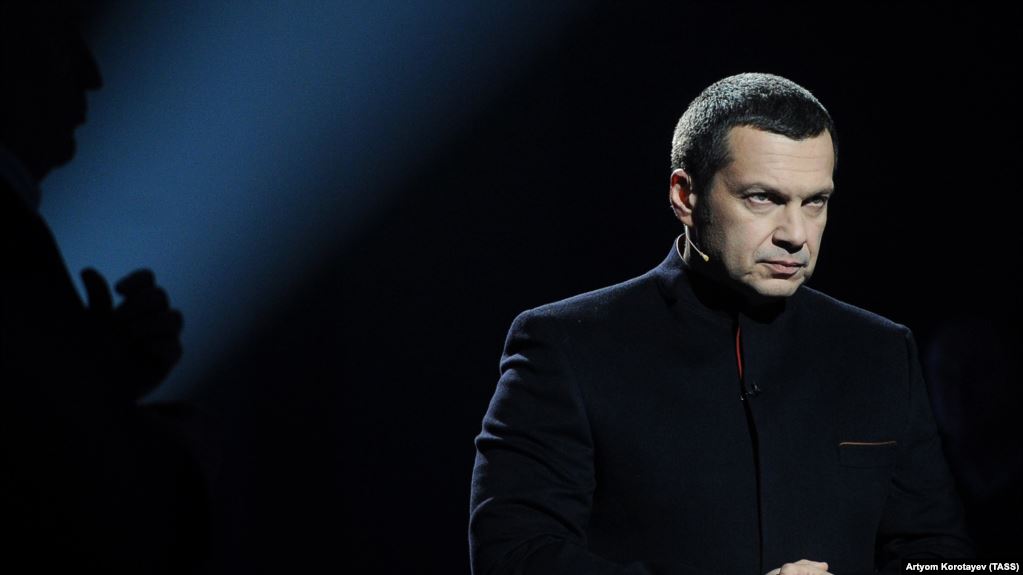 MOSCOW — As the latest episode of his weekly talk show got under way on March 1, pro-Kremlin TV presenter Vladimir Solovyov turned to address his viewers across Russia.

The topic of the evening was the latest escalation in Syria’s Idlib Province, where the death of at least 33 Turkish soldiers in a February 27 air strike escalated tensions between Moscow and Ankara and appeared to place the two regional powers – which back opposite sides in the Middle Eastern country’s military conflict — on the brink of war.Solovyov’s description of the carnage hewed closely to the Kremlin line, from the specific wording to the broader narrative: the Turkish-backed opponents of President Bashar al-Assad were “terrorists,” government forces were provoked, and Russia had nothing to do with it.

“Terrorists who were supposed to be restrained by Turkey attacked the Syrian Army, which delivered a retaliatory blow,” Solovyov said. “That resulted in the deaths of several dozen Turkish servicemen, who shouldn’t have been there in the first place.”

Solovyov’s show on state TV is part of a crop of weekly news shows and other programs that advance the Russian government’s positions on international affairs, and the latest theme of discussion came as the world focused much of its attention on the volatile region. The signal conveyed by several of these shows was clear: Turkey was not welcome in Syria.

The message came after Turkey’s worst loss of life in a single military attack since the nine-year war in Syria began. Ankara moved quickly to reinforce troops working to back rebel groups in their campaign to thwart Assad’s drive to seize back control over the restless province with the assistance of Russian air power.

On March 1, Turkey’s defense minister said that his country was “successfully” continuing its military operation in northwestern Syria against the Russian-backed government in Damascus and that Ankara has no “desire or intention to clash with Russia.” But within hours of that statement, reports from Syria claimed that Turkish forces had downed Syrian warplanes.

Turkey and Russia have avoided a major confrontation so far in the war. Presidents Vladimir Putin and Recep Tayyip Erdogan mended fences quickly after Turkish jets shot down a Russian warplane in November 2015, an incident that Putin called a “stab in the back” and that spurred a wave of anti-Turkish reports on Russian state TV.That downing came shortly after Moscow launched a campaign of air strikes and increased its military footprint on the ground in Syria, helping turn the tide of the war in Assad’s favor at a time when he had seemed close to defeat.

Moscow — which also gives Assad’s government diplomatic support, shielding it from punishment by the UN Security Council — has long referred to Turkish-backed rebels fighting against the Syrian president as terrorists and has denounced any move by outside forces to lend them support.

Now, with tensions escalating, Kremlin-allied pundits are pressing the claim that Turkey should not be in Syria in the first place and portraying Ankara’s presence in the neighboring country as illegal — in contrast to the presence of Russian forces, which Syria and Russia say was requested by Assad in 2015.

In an interview a state-TV program that focuses on Putin, Kremlin spokesman Dmitry Peskov drove the point home. Russia is the only country whose forces are active in Syria in accordance with the wishes of its “legitimate” government, he said — echoing assertions Moscow has made about the legitimacy of U.S. military actions there. Others, he added, are there “in contravention of the norms and principles of international law.”

A Meeting In Moscow

Official statements were in sync with the narrative advanced on state channels, which portrayed Turkey’s losses in Syria as a result of what they suggested was its misguided interference in the country. In his weekly news round-up on March 1, prominent state TV presenter Dmitry Kiselyov said NATO member Turkey was only “visiting” Syria since it had never been invited to station troops there.

Kiselyov’s assessment of the February 27 attack on Turkish forces was similar to Solovyov’s. He asserted that the attack was carried out by the Syrian military and said that the Turkish soldiers who were killed “were marching into combat shoulder-to-shoulder with terrorists.”

On March 2, the Kremlin drew Turkey’s attention to a warning from the Russian Defense Ministry that Moscow could not guarantee the safety of Turkish planes flying in Syria, following retaliatory Turkish drone strikes that killed 19 Syrian soldiers on March 1 and downed two government warplanes.

Peskov confirmed that a meeting between Putin and Erdogan would take place on March 5 in Moscow, part of what both Russia and Turkey cast as an effort to calm the situation and avoid military conflict. It came amid a flurry of statements by Turkish and Russian officials aimed at downplaying the prospect of war between Moscow and Ankara.

“We have no intention of waging war on anyone,” Putin said in an interview with state news agency TASS, which aired on March 2 – and which included a thinly veiled warning against provoking Russian military action. “We strive to create conditions so that no one thinks of waging war on us. So that it doesn’t cross anyone’s mind.”

Putin’s critics, meanwhile, mocked Russia’s foreign posturing at a time when the country’s economy struggles and real wages continue to fall for vast swaths of its population.

“After we conquer Istanbul,” wrote opposition politician Leonid Gozman. “We’ll seize the straits and go further, to the Persian Gulf. But never – NEVER! – will we get our own house in order.”