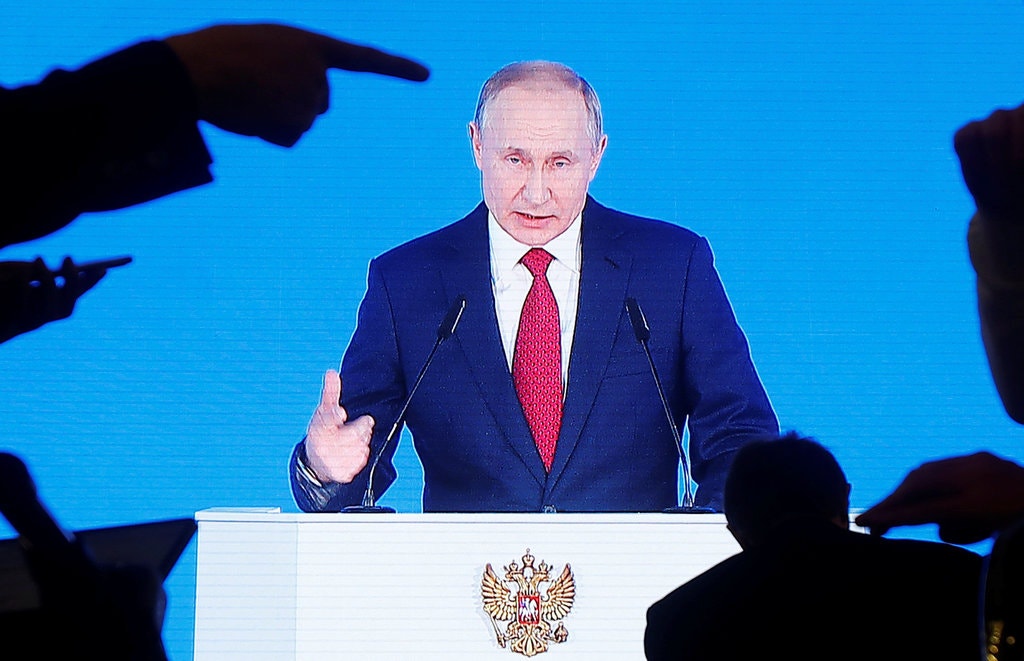 By proposing to empower a toothless advisory body, President Vladimir V. Putin set off new speculation about his own long-term plans.

MOSCOW — President Vladimir V. Putin of Russia submitted constitutional amendments on Monday that empower a previously toothless advisory council as a powerful policy arbiter, setting up what could be a future role for himself as Russia’s long-term paramount leader.

Short on vital details, the proposed changes shed little light on Mr. Putin’s exact plans and set off another round of speculation about the future of Russia’s longest serving leader since Stalin.

The amendments sharply increase the role of the State Council, turning what is currently a largely decorative body into a new locus of power that will “determine the main direction of domestic and foreign policy.” Not specified, however, is how the council’s head will be chosen and whether the body will be subordinate to the presidency.

The council is currently chaired by Mr. Putin in his role as president, a position he first took when President Boris N. Yeltsin resigned on New Year’s Eve 1999. But Mr. Putin is barred from seeking re-election once his current term runs out in 2024. His constitutional changes, first announced in a state of the nation address last Wednesday, are widely viewed as an effort to prolong his hold on power after the end of his presidential term.

The sudden flurry of changes has spawned a host of often contradictory theories about what Mr. Putin is up to and why he is moving so fast to reshape a political order largely unchanged for more than quarter of a century.

One theory is that, as a former KGB agent, Mr. Putin has embarked on a lightning “special operation” that, swift and unexpected, aims at subduing potential resistance by not giving time for anyone to figure out what is happening. Another unsubstantiated theory is that he could be ill and needs to move quickly before he is forced to bow out.

But, said Ivan Kurilla, a political analyst in St. Petersburg, Mr. Putin’s hometown, “the most plausible explanation is that he wants to become the elder statesman who still holds power like the former Chinese leader or Nazarbayev,” references to the late Chinese leader Deng Xiaoping and to Nursultan A. Nazarbayev of Kazakhstan.

Mr. Nazarbayav stepped down as president of that Central Asian country last year after nearly three decades. But he retained his influence by assuming the new title of “leader of the nation” and declaring himself chairman for life of a strengthened Security Council.

After Mr. Putin announced his proposed constitutional changes last week, the prime minister, Dmitri A. Medvedev, and his entire government promptly resigned, giving Mr. Putin a free hand to reappoint ministers or name new ones. That process is expected to start this week.

Monday’s removal of the prosecutor general, Yuri Y. Chaika, indicated that the shake-up would extend beyond the cabinet. Mr. Chaika, a former justice minister and senior prosecutor since shortly before Mr. Putin took power, is being moved to another, so far unspecified position, the Interfax news agency reported.

Taking over his powerful post as prosecutor general, roughly the equivalent of the attorney general in the United States, is Igor Krasnov, the deputy head of Russia’s version of the F.B.I., the Investigative Committee.

The office of the prosecutor general and the Investigative Committee have frequently feuded over turf, and the appointment of Mr. Krasnov could be an attempt by Mr. Putin to calm potentially destabilizing rivalries in the law enforcement system as he retools Russia’s entire political order.

To some, Mr. Putin’s revision of the constitution suggests a strategy to replicate the prolonged rule in China of Mr. Deng, who stepped down from the Communist Party’s ruling Politburo Standing Committee in 1987 but retained his position as the country’s paramount leader through his leadership of an advisory body made up of party elders.

But Mr. Deng, who died in 1997, and whose only formal position in his final years was the chairmanship of China’s Bridge Association, enjoyed vast authority and prestige as a veteran revolutionary who, though purged for a time, had been a prominent figure in the Communist Party leadership for half a century. He also enjoyed huge prestige as the main architect of a radical reordering of China’s economic and political priorities after the 1976 death of Mao Zedong.

Mr. Putin, by contrast, was until the 1990s a little known municipal official in St Petersburg. But he has amassed such overwhelming power and personal popularity that he can probably reshape the system pretty much as he pleases.

Whether the State Council would provide a sufficiently secure perch from which Mr. Putin could control events, however, is unclear. The proposed amendments stipulate that the council will be “formed” by the president, which could well be someone else after 2024.

The amendments submitted Monday give little comfort to those who had interpreted Mr. Putin’s speech last week as endorsing the creation of a more powerful role for Parliament, which under the current system serves as little more than an echo chamber and rubber stamp for the Kremlin.

Those amendments give no major new powers to the Parliament and, if anything in some areas broaden powers of the president, who will appoint much of the security leadership, nominate the prime minister and form the strengthened State Council.

Tatiana Stanovaya, a political analyst with the Moscow Carnegie Center, wrote that the advantage of the State Council for Mr. Putin is that its work “brings together all the main institutions of power: the presidential administration, the government, ministers and governors, the leadership of the ruling United Russia party and even the heads of state corporations and banks.”

But how much power it will have, she added, is “one of the biggest questions arising from Putin’s plans for constitutional reform. Most probably, its authority will be directly proportionate to Putin’s concern that the next president could break free of his control.”

The current constitution bars the president from having more than “two consecutive terms,” but e Monday’s proposed amendments remove the “consecutive” qualification and prohibit more than two terms outright. This would suggest that Mr. Putin will not try to engineer a way around term limits as he did in 2008, though some observers believe that he could stay on in the Kremlin, arguing that the clock will start from zero once the revised constitution is adopted.

After serving two terms as president, Mr. Putin in 2008 stepped away from the Kremlin to become prime minister, installing his longtime ally, Dmitri Medvedev, as a presidential place holder until he returned as president for a third term in 2012. But that maneuver, announced in tandem with the results of tainted parliamentary elections, stirred widespread street protests, something that Mr. Putin wants to avoid in the future.

Source: NYT
News
UK sanctions Russian airlines to prevent them selling landing slots 19 May 2022
Putin involved in war ‘at level of colonel or brigadier’, say western sources 19 May 2022
Vladimir Putin has said that by abandoning Russian energy supplies, Europe risked paying the most expensive energy prices in the world. 17 May 202217 May 2022
Opinion | How to Reinvigorate NATO and Deter Putin’s Aggression 17 May 202217 May 2022
Brussels plans to help EU countries confiscate assets frozen by sanctions 11 May 202211 May 2022
See all news
Home / News about the persons / Putin Outlines Political Overhaul, Including Possible Post for Himself
© 2018-2022 The database “PUTIN'S LIST”