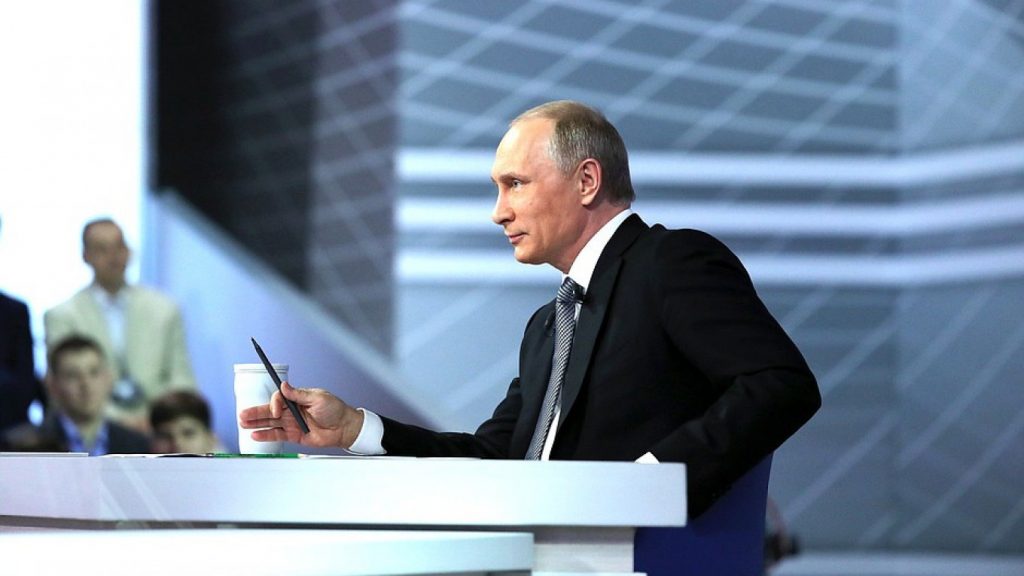 From Hitler to Stalin, and from Mussolini to Mao, the world’s twentieth-century dictators took to heart Niccolò Machiavelli’s famous dictum that “it is better to be feared than loved.” Yet most modern dictators seem more concerned about maintaining their people’s loyalty not by giving them what they want, but by manipulating them into thinking they already have it. Nobody executes this approach more masterfully than Russian President Vladimir Putin.

Though Putin’s approval ratings have declined considerably in recent years, they remain high, with polls indicating that 61% of Russians evaluate his performance positively. If a presidential election were held today, 44% would vote for Putin. No other candidate would receive double-digit support.

Putin certainly does not owe his popularity to his economic leadership. Since recapturing the presidency in 2012, he has consistently failed to deliver on promises of reform, higher productivity and investment, and improvements in Russians’ standard of living. And his government does not seem to have any plan to kick-start stagnant GDP growth.

The International Monetary Fund expects Russia’s annual GDP growth to average less than 2% over the next five years. In 2021, Russia’s share of global GDP (in purchasing parity terms) is expected to drop below 3% for first time in modern times. In nominal terms, this ratio will be even lower — an estimated 1.8%. Most important, Russian households’ real incomes are currently 10% lower than they were in 2014, and show no signs of rising.

So what explains Putin’s enduring popularity? As Daniel Treisman and I argue in a recent paper, the answer — for Putin and other modern autocrats — lies in the ability to control the information people receive, which enables a leader to convince most of the population that, despite the regime’s imperfections, it is the country’s best option.

In the digital age, this is no easy feat. A growing number of educated citizens — or, as we call them, “informed elites” – recognize the system’s deficiencies. It is thus imperative for autocrats to prevent these elites from communicating the truth to the public.

Repression plays an important role here. But far from the widely publicized mass repression of the past — aimed at scaring off all potential opposition — today’s repression is targeted and, critically, deniable. Russian opposition leader Alexei Navalny was officially barred from running in the 2018 presidential election not for political reasons, but because of his fraud conviction (subsequently overturned by the European Court of Human Rights). This approach enabled Putin to maintain the pretense that he secured power in a free and fair election.

Modern informational autocrats also make extensive use of censorship. Russia ranks in the bottom 20% of the press-freedom rankings compiled by Freedom House and Reporters Without Borders. Moreover, Freedom House’s Freedom on the Net Index shows that the Internet is less free in Russia than in Belarus, Kazakhstan, or Turkey, reflecting the importance of online censorship in an informational autocracy with high Internet penetration. According to the Google Transparency Report, Russia leads the world in official requests to remove online content. In the first half of 2019, Russia placed more than 10,000 requests to remove content. The second-place country, Turkey, had just 1,000 requests. (China is not included in the ranking.)

With Russia’s constitution explicitly outlawing censorship, one of the most important jobs of the Kremlin’s censors is to conceal information about their own activities from the public. And they are largely successful. As Treisman and I show, in informational autocracies like Russia, the general public is significantly more optimistic about media freedom than educated elites.

A third key tool for silencing the informed elites is co-optation. Rather than resist Putin’s regime, and face repression or censorship, Russian elites who choose to support it are rewarded handsomely. Indeed, for this corrupt system to work, Putin must ensure that it provides larger rewards than a competitive one would.

But, as effective as these tools have been, the challenge of controlling information is only intensifying. In particular, YouTube has become a powerful platform for independent and opposition bloggers, as well as political satire. And, given YouTube’s popularity as a source of entertainment for ordinary Russians, the Kremlin cannot simply block the platform without exposing the extent of its censorship activities.

China has managed largely to avoid this challenge, by building its own, controlled version of the Internet, including social-media and entertainment platforms. But it launched this strategy as soon as Internet penetration began, so Chinese users have never experienced a free YouTube. With Russians already integrated into the global Internet, it is too late to adopt such an approach.

Compounding the challenge, the cohort of informed elites in Russia is growing. As the top Russian propagandist Dmitry Kiselev recently acknowledged, “higher learning in the humanities (and social sciences) breeds social unrest.” Not surprisingly, he complained that “too many” Russians are studying these subjects.

The majority of Russia’s population will not become well-informed overnight. But, as the regime is forced to dedicate more resources to silencing the informed, the majority will suffer economically. Eventually, the reality of their empty refrigerators will overwhelm the eternally optimistic messages coming from their televisions and computers, and the foundations of Putin’s informational autocracy will begin to crumble.

This article was first published by Project Syndicate

The views expressed in opinion pieces do not necessarily reflect the position of The Moscow Times.