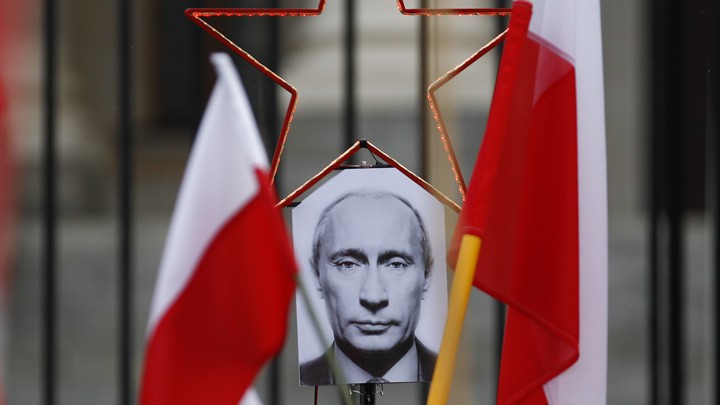 In a series of comments in late December, the Russian president appeared to blame Poland for the outbreak of the Second World War.

In the opening scene of the most famous Polish movie of the past two decades, a crowd of anxious, desperate people—on foot, riding bikes, leading horses, carrying bundles—walks onto a bridge. To their immense surprise, they see another group of anxious, desperate people heading toward them, walking from the opposite direction. “People, what are you doing?!” one man shouts. “Turn back! The Germans are behind us!” But from the other side, someone else shouts, “The Soviets attacked us at dawn!” and both sides keep walking. General confusion ensues.

This scene takes place on September 17, 1939, the day of the Soviet invasion of Poland; the Germans had invaded two and a half weeks earlier. The movie is Katyn. The director, the late Andrzej Wajda, had long wanted to film that scene on a bridge, a visual representation of what happened to the whole country in 1939, when Poland was caught between two invading armies whose dictators had jointly agreed to wipe Poland off the map.

Even while that joint invasion was unfolding, both dictators were already lying about it. The agreement to create a new German-Soviet border in the middle of Poland, as well as to consign Lithuania, Latvia, Estonia, and Finland to a “Soviet sphere of interest,” was part of a secret protocol to the Molotov-Ribbentrop Pact, the nonaggression deal between Hitler and Stalin signed on August 23. The secret protocol was found in Nazi archives after the war, though the Soviet Union went on denying that it existed for many decades.

Each side also manufactured special lies of its own. The Germans sponsored an entire false-flag operation, involving fake Polish soldiers—SS officers in Polish uniforms—who launched an orchestrated attack on a German radio station and broadcast anti-German messages. American newspaper correspondents were summoned to the scene and shown some corpses, which in fact belonged to prisoners, murdered especially for the occasion. This “crime,” together with a few other staged “attacks,” composed Hitler’s formal excuse for the invasion of Poland. On August 22, he told his generals not to worry about the legality of the operation: “I will provide a propagandistic casus belli. Its credibility doesn’t matter. The victor will not be asked whether he told the truth.”

The Soviet invasion of eastern Poland, meanwhile, was never formally described as an invasion at all. Instead, in the words of Corps Commissar S. Kozhevnikov, writing in the Soviet military newspaper Red Star, “the Red Army stretched out the hand of fraternal assistance to the workers of Western Ukraine and Western Byelorussia freeing them forever from social and national bondage.” The Soviet Union never admitted to having conquered or annexed the Polish territory: These lands remained part of the U.S.S.R. after the war and are still part of modern Belarus and Ukraine today. Instead, the whole operation was described as a battle conducted on behalf of the “liberated peoples of Western Ukraine and Western Byelorussia.”

Readers will, I hope, forgive this long excursion into the past, but it is necessary background to the series of strange and otherwise inexplicable statements made by Russian President Vladimir Putin at several meetings in late December. For in the course of a single week, Putin brought up the subject of Polish responsibility for the Second World War no less than five times. He told a group of Russian businessmen that he was consulting with historians and reading up on Polish diplomacy in the 1930s in order to make this case. At a meeting at the Russian defense ministry, he angrily proclaimed that the Polish ambassador to Nazi Germany in the 1930s—not really, one would think, a person of tremendous relevance—had been “scum” and “an anti-Semite pig.” After yet another meeting with the president, the speaker of the Duma, Russia’s parliament, publicly called for Poland to apologize for starting the war.

If this were some kind of caprice, just a little excursion into obscure events in the distant past, nobody would care. But these kinds of lies have a history of ending in catastrophe. The Soviet ethnic cleansing of eastern Poland and the Baltic states began immediately after the invasion, after all, with the arrest of hundreds of thousands of Poles and Balts and their deportation to settlements and concentration camps in the east. (The Nazi ethnic cleansing of western Poland began immediately too, with the mass arrest of university professors in Krakow, a city that was meant to become ethnically German, and—ominously—the construction of the first ghettos for Polish Jews.)

Back in the Gorbachev era, the Russian state actually apologized for the U.S.S.R.’s role in these atrocities. In 1989, the Soviet Congress of People’s Deputies even declared the Molotov-Ribbentrop Pact null and void. But the mood has been changing for some time. Academic defenses of the Hitler-Stalin alliance began appearing again in Russia in 2009, timed to the 70th anniversary of 1939; one collection of essays published at the time even included an approving introduction written by Sergei Lavrov, the Russian foreign minister.

Events of this year, which marked the 80th anniversary, may also have reinspired the Russian president. In September, the European Parliament passed a resolution condemning the pact, as well as the two totalitarianisms that destroyed so much of Europe in the 20th century. That kind of statement rankles Putin, who now holds annual celebrations of World War II Victory Day and uses the war as one of the symbolic justifications for his own authoritarianism. He wants to make Russia not just great again, but “great” precisely as it was “great” in 1945, when the Red Army occupied Berlin.

But that was three months ago. Why stir trouble? Why create bad blood exactly now? After all, things are going rather well for Putin, at least in his relations with the Western world. The American president is a fan; pro-Russian, far-right political parties are thriving in Germany, Italy, Austria, and France; even moderate Europeans are tiring of the chilly relationship with Russia and are bored with sanctions. Poland, meanwhile, is more isolated than it has been in 30 years. The unique Polish-German relationship, built up over several decades, has been almost totally destroyed by the current populist, nativist Polish government, some of whose members are more anti-European than anti-Russian. More tension is coming. Having packed the constitutional court, the Polish Parliament is now preparing, this month, to vote on a law that could allow the government to fine, or even fire, judges who question the government’s judicial reform, or engage in any political activity at all. This illegal, unconstitutional assault on judicial independence, as well as on judges’ civil rights, will almost certainly bring Poland once again into conflict with its allies.

But maybe, from Putin’s point of view, that makes this a good moment to launch a verbal attack on Poland. The nation is no longer quite so integrated, no longer quite so automatically European, no longer able to count on good German friends—maybe this is an excellent time for the Russian president to cast doubt on Polish history, too. Or, as we have all now learned to say, maybe it is a good moment to cast doubt on Poland’s “narrative”: Victim of the war, victim of communism, triumphant fighter for democracy and freedom—all of that can be thrown into doubt. Later this month, Putin will be the main speaker at an Israeli event to mark the 75th anniversary of the Red Army’s liberation of Auschwitz, and that will be another moment to make the same argument. It’s also a good way to test the waters. Just as Poland is on the threshold of a move in the direction of real authoritarianism, Putin wants to see how the world reacts—how Poland reacts—to the idea that Poles and Nazis were more or less the same thing.

If that is the point, Putin may have been pleased. The Polish prime minister reacted, issuing a strong statement, but the Polish president has still not said anything at all. I was in Poland over the Christmas holiday—I am married to a Polish member of the European Parliament—and there was much speculation about why not. Strange though it sounds, the nativist ruling party, although happy to loudly denounce immigrants and gay rights, is actually rather afraid of Russia. Quietly, some of its members and sympathizers even admire Russia for its open racism and its aggressive nationalism. But the international reaction was also weaker than it might have been. True, the German ambassador to Warsaw protested, and the American ambassador to Warsaw responded boldly on Twitter. “Dear President Putin,” she tweeted, “Hitler and Stalin colluded to start WWII, Poland was a victim of this terrible conflict.” The Russian embassy in Warsaw replied, as Russian official Twitter feeds now often do, with a sneering personal insult: “Dear Ambassador, do you really think that you know about history any more than you do about diplomacy?”

But—I know, it’s shocking—there has been no word from the White House, and not much from other European heads of state either. And you can see why: Let’s leave those annoying Poles to squabble with Russia over the war is a temptation that’s hard to refuse, especially during the holidays, and especially now that attention has turned decisively toward the Middle East.

Some think that all this history talk may have other purposes. If Russia wasn’t a perpetrator of the war, after all, then perhaps it was a victim. And victims deserve compensation, surely. Perhaps Russia will now use some leftover historical arguments to claim that it is owed more land in Ukraine. Perhaps Russia, which has had its eye on Belarus for a long time, will use similar arguments to finally make that country, already a dependent state, into a full-fledged province. Only hours after the assassination of General Qassem Soleiman, Russia quietly cut off oil supplies to Belarus as economic talks collapsed, a move that went almost entirely unremarked. And, of course, many in the Baltic states are also deeply unnerved by the new Russian enthusiasm for the Molotov-Ribbentrop Pact, whose secret protocol robbed them of their independence for nearly half a century. Could this be a prelude to another attack on their sovereignty? Or some other atrocity? Lies about the origins of the war have a way of leading to much worse things.

Yet it is just as likely that Putin’s primary aim really is what it seems to be: the undermining of the status and position of Poland itself. It is the largest and most important of the Eastern European NATO members, with the biggest army and the most serious economy; the country that originally proposed the European trade treaty with Ukraine—the treaty that led to protests, and the pro-Russian president’s abdication, in Ukraine in 2014; the country that argued for more than a decade against the Nord Stream 2 Russian-German pipeline, now stopped by U.S. sanctions. Why wouldn’t Putin want to undermine and destabilize Poland’s position? By doing so, he undermines and destabilizes the whole post–Cold War settlement. And that, of course, has been the central goal of his foreign policy for two decades.

We want to hear what you think about this article. Submit a letter to the editor or write to letters@theatlantic.com.