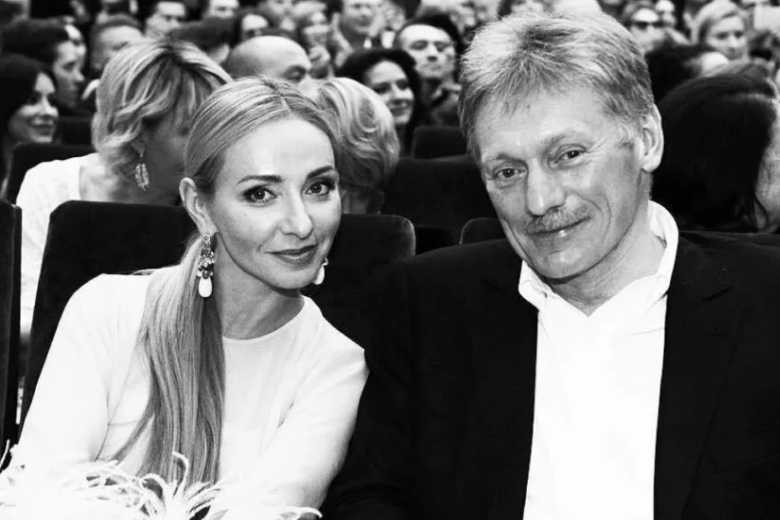 Last year, the State Committee for Registration and Cadastre of the Republic of Crimea accused the Galit production cooperative (PC), co-owned by the wife of Presidential Press Secretary Dmitry Peskov, Tatyana Navka, of seizing 4.5 hectares of the Black Sea coast near the city of Saki. Nevertheless, despite all the orders, the company continues to work and bring profit. According to the declarations, in the spring of this year, Tatyana Navka became the richest among the Kremlin wives. In 2018, her income amounted to 218.9 million rubles ($3.4 million). The CrimeRussia found out that Tatyana Navka’s “salt” and “ice” business is flourishing with the support of the president’s press secretary.

What’s the salt of the earth?

Crimean salt factory Galit illegally uses land on the coast to place a capital construction in progress, dumps, and railway lines (in particular, a narrow gauge railroad), as well as to conduct activities for the extraction of sea salt. At the same time, the company, one of the co-founders of which is the wife of Dmitry Peskov, Tatyana Navka, does not have any rights to this site. The General Prosecutor’s Office came to this conclusion at the end of last year.

To recall, figure skating champion Tatyana Navka became the owner of 16.6% in Galit PC at the end of November 2018. Olga Beloborodova, Yury Volkov, Anna Volkova, Oksana Lysenko, and Sergey Khomyak have similar shares in the enterprise. The cooperative is engaged in the extraction of sea salt, including pink minerals rich in trace elements, on Sasyk Lake, in the Saki region, and is the last of the large salt fields operating there.

Tatyana Navka is a co-founder of Galit PC

According to the constituent documents, together with Tatyana Navka, Senator from the Kaluga region, Yury Volkov, also became a co-owner of the company. It is known that he, together with businessman Konstantin Malofeev and stuntman Alexander Inshakov, is a co-founder of the Professional Combat Sambo Club. His daughter Anna Volkova is a co-owner of the Crimean saltworks.

You would think that nothing links figure skater Tatyana Navka to salt business. And why would a well-known champion even need such a highly specialized chemical and technological direction? The answer is as follows. Salt production is a rather profitable industry, and besides, with the help of a high-ranking Kremlin spouse, there is no doubt in profit.

This is how Galit PC extracts Crimean salt

It should be stressed that back in September 2016, the Russian government included table salt in the list of the food embargo. Its import into the Russian Federation from the EU, USA, Ukraine, and others is still prohibited. When Tatyana Navka joined Galit as a co-founder, this company received from Krymavtodor State Unitary Enterprise a contract worth about 26 million rubles ($404,822) for the supply of technical salt (the so-called anti-icing salt), while being the sole bidder. Can it be a coincidence? It is unlikely.

Contract for the purchase of industrial salt from Galit PC

Only in the fall of last year, information was added to the unified register of inspections of the Prosecutor General’s Office that Galit had no rights to use areas of 3.56 hectares and 0.97 hectares located near the village of Pribrezhnoye. The cooperative was ordered to eliminate violations before January 27, 2019 either by vacating the territory, or registering rights to use it. In addition, the company was fined 105 thousand rubles ($1,634) for the seizure of land.

However, Galit PC representatives refuse to comment on this situation, and it is not known whether someone asked Tatyana Navka about this issue or not. It is known, however, that the company continues to operate, extract raw materials and market them, including as a cosmetic product. For example, there is a fairly wide assortment of pink salt products sold by Galit PC on the Internet.

It is known that Tatyana Navka is American citizen and lived in the United States until her marriage with Dmitry Peskov. Her previous marriage to skater Alexander Zhulin was officially terminated in July 2010.

They have a daughter, Alexandra Zhulina, 19, who has lived in Moscow since 2006. She studies at the New York Film Academy. She is also known as a singer under the pseudonym Alexia, who signed a contract with the MUZ TV channel in 2017. Alexandra Zhulina has dual citizenship.

According to available information, Tatyana Navka provided false information to the IRS. For example, after the divorce, Tatyana Navka and her ex-husband Alexander Zhulin received tax benefits as spouses until 2013 (that is, for three years). In addition, in 2009, they declared the sale of a house in the state of New Jersey, but remained its formal owners for almost ten years.

There is also information that Tatyana Navka was concealing information about three accounts at the Bank Banque Internationale à Luxembourg in Zurich, opened in February 2014, thus violating American law. By the way, at the time, she also founded the offshore company Carina Global Assets Limited in the British Virgin Islands.

Tatyana Navka married President’s Press Secretary Dmitry Peskov in August 2015. In October 2014, after the birth of their daughter Nadezhda, she acquired elite real estate in the villa community Tretya Okhota, located in the Krasnogorsk district of the Moscow region.

The cost of luxury apartments is more than 1 billion rubles ($107 million). The area of the three-story mansion is about 800 m²; the territory of the house is 9400 m². The estate has a spa area with a pool and a sauna, a gym, and a park with running tracks. The village is guarded. The cost of a regular country house here is about 69 million rubles ($1.07 million).

Dmitry Peskov and Tatyana Navka’s suite on Novorizhskoe Highway in the Moscow region.

In the agreement of sale and purchase, the owner of Fortstroyservis LLC, Timur Khaldarov, is indicated as the seller. It is known that in the period from 2008–2018, Timur Khaldarov headed the charitable Foundation for Assistance to Victims in South Ossetia, the founders of which were Russian oligarch Alisher Usmanov and State Duma deputy Andrey Skoch, who is known for his connections with criminal structures.

Apart from this, Tatyana Navka owns an apartment in the elite Moscow residential complex Polyanka Plaza worth $2 million and an apartment in the Yakimanka district in Moscow worth $4 million; she also manages a sports arena rented from the Moscow government for 49 years.

Rich wife makes one as safe as houses

After information was published about the property and income of the Kremlin’s representatives in the spring of this year, it became clear that Tatyana Navka was the richest among the wives of Kremlin officials. In 2018, her income amounted to 218.9 million rubles (Dmitry Peskov’s income was 17 times less). In 2017, Navka declared about 200 million rubles. In an interview with Fontanka, she noted that her high-ranking spouse does not feel a pinch due to the large difference in income. How can he?

It is known that Tatyana Navka is accustomed to luxurious live. For example, during the last New Year’s holidays, she, her mother Raisa Navka and her friend, singer Zhasmin, went to the Maldives, where they stayed in one of the most expensive villas in the Velaa Private Island complex (cost of accommodation – $24 thousand per day). They had a swimming pool, a garden atrium, a private beach, a golf club, and a spa at their disposal.

It should be stressed that after Tatyana Navka became the wife of Dmitry Peskov, she had to close her Swiss accounts and say goodbye to overseas property. To recall, in May 2013, a law came into force in the Russian Federation prohibiting foreign officials and their relatives from having foreign accounts and deposits. But only a year after the wedding with Peskov, in 2016, Tatyana Navka hired financial adviser from Protax Services Inc, Ilya Bykov, to check her tax status in the United States and sell an apartment of 126 m² in a 116-meter skyscraper in Manhattan. Chinese scientists working in the United States, Zhang Xiaomeng and Yuncheng Ling, bought the $1.7-million suite.

Tatyana Navka and her ex-husband Alexander Zhulin sold the suite

It is noteworthy that back in 2017, this apartment was listed in the declaration of Dmitry Peskov; the wife of the president’s press secretary did not have any foreign real estate in her declaration in 2018. In addition, an apartment of 180 m² in France, which was previously used by one of Peskov’s sons from his previous marriage, also disappeared from the declaration. Thus, all real estate of the Peskov-Navka family, indicated in the 2018 declaration, is located in the Russian Federation.

As for the previously mentioned account in Switzerland, according to the banking documentation, Tatyana Navka did not close it. Last February, journalists of the Dosye (Dossier) center carried out a test transfer to it; the system recognized the international account number by linking it to the name Navka Tatiana, and the bank confirmed the receipt of money. Despite this, Dmitry Peskov and Tatyana Navka deny having foreign accounts.

Although, they do admit to having a car fleet. It includes several premium Mercedes-Benz models of increased comfort and a Lexus RX totaling more than 25 million rubles, as well as a Yamaha all-terrain vehicle and a Can-am snow and swamp vehicle.

Protected by the Kremlin

In addition to his wife, Dmitry Peskov also has a respectable mother-in-law, Raisa Navka. She advertises Sberbank’s Active Age program, advocating for the abolition of pensions, practices, yoga and tries to convince everyone that she achieved well-being exclusively on her own.

Raisa Navka prefers a Mercedes-Benz S 500 4 Мatic Maybach worth more than 9 million rubles, which she uses to make regular trips from her luxurious apartment in the elite Kopernik apartment complex, where she heads the local housing cooperative, to a Moscow region’s “castle” of her high-ranking son-in-law, which is registered in the name of Tatyana Navka.

As for the skater herself, she keeps on replenishing the family budget with her copyright ice shows. For example, last year, Moscow Department of Labor and Social Protection bought 325 tickets for the premieres of Navka’s ice musical “Ruslan and Lyudmila” worth about 420 thousand rubles, and the Ministry of Education purchased almost 7 thousand similar tickets for 12 million budget rubles. It is also known that for 7 New Year’s performances in 2018, Tatyana Navka received 6,432,000 rubles from Roskontsert, which is subordinate to the Ministry of Culture. In turn, last May, Russian Railways transferred 9,999,900 rubles as sponsorship to Navka Show LLC.

It should be stressed that the organizers of Navka’s ice show are different companies: Iventika, Mediator, and Navka Show. But they only seem different. For example, Mediator is headed by Eventika Executive Director Zoya Sinitsyna. Eventika’s owner Sergey Kolushev is a close friend of the family and was among the honored guests at the wedding of Peskov and Navka.

In other words, Dmitry Peskov should not worry; his wife’s business is in good hands, HIS hands. After all, who will refuse the president’s press secretary to lobby for family projects? Actually, we are observing the same situation with salt mines in Crimea. The Prosecutor General’s Office has known for more than a year that the land in the village of Pribrezhnoye is being illegally used by the Galit PC. Nevertheless, the company continues to operate and make a profit, and we know why. It is because the wife of the president’s “right-hand man” Dmitry Peskov is one of its co-founders.

By the way, the Crimean “salt magnates” have no competitors. The fact that since July 2016, the eldest son of the Prosecutor General of the Russian Federation, Artem Chaika, has been the owner of the largest Russian salt producer, the Tyretsky salt mine in the Irkutsk region, does not in any way affect the income of Galit PC.

Firstly, because they produce different salt. Secondly, because the East Siberian Commercial and Industrial Company LLC, where Artem Chaika has a 90% share, is a supplier of edible salt to Siberia and the Far East. In general, the interests of the Prosecutor General’s salt miners do not overlap with the Crimean salt cooperative of Tatyana Navka