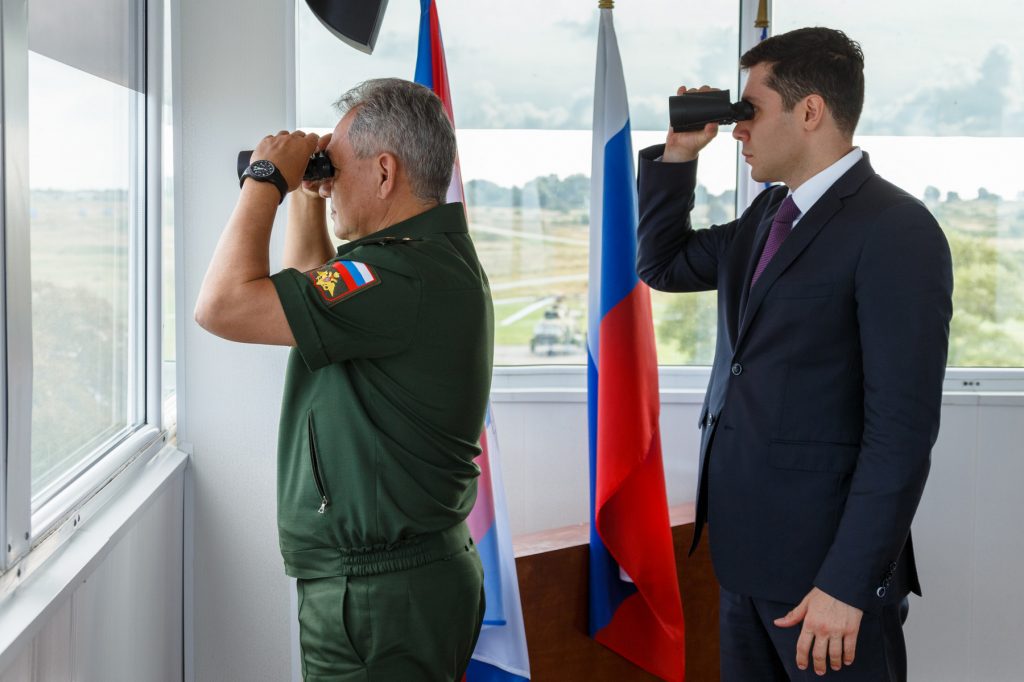 In recent years, Russia’s Minister of Defence Sergey Shoigu has virtually become part of Vladimir Putin’s inner circle, alongside the president’s former colleagues from his days in the St Petersburg mayoralty and his fellow comrades at the KGB. By virtue of his deep involvement in the Russian president’s geopolitical designs, the head of Russia’s armed forces has become one of a select group which is in close and constant contact with the head of the state. This has even prompted speculation about whether Shoigu could become Putin’s anointed successor in future years; after all, he certainly occupies a significant role in the state’s decision making processes. But how close to the president is he really?

“Now more than ever, Putin is seriously considering the famed Tuvan as a potential president of Russia. And for the first time in at least 13 years, Shoigu is signalling that he consents to this ‘relocation;’ that he is ready for this game,” wrote the famous journalist Stanislav Kucher in Kommersant in November 2012, when Shoigu was appointed Russia’s Minster of Defence. Precisely seven years have passed since then: the country has changed, international affairs have changed significantly, and in this context Shoigu has “gone with the flow.” His department eventually came to play a crucial role in realising Putin’s grandiose geopolitical projects.

Shoigu’s career rests on two pillars. The first is his reputation as a “saviour,” or one of the most successful state functionaries, who served for almost 18 years as the head of Russia’s Ministry of Emergency Situations. He is perhaps the sole politician from Russia’s ruling elite of the 1990s who garnered a positive reputation for his role in those crisis-ridden years. This is a very different kind of baggage. Furthermore, after 19 years of Putin’s rule, Shoigu remains Russia’s second most popular politician (after the president himself, of course.) Many believe that this has prompted some political jealousy and resentment on Putin’s part: they say that as Shoigu has turned out to be the president’s main domestic competitor, Putin prefers to keep him close by, under personal supervision. But it is possible that there is another logic to Putin’s behaviour: he probably perceives Shoigu as “human capital” which requires some investment. The Minister of Defence, due to his professional capabilities, can indeed be considered somebody whose services are in high demand in Russia today.

The second “pillar” of Shoigu’s successful career is his role in Putin’s rise to power. By the autumn of 1999, he had become the leading figure in the newly created Unity movement, which took part in elections to the State Duma against the background of a deep divide in the country’s ruling elites and the advantageous position enjoyed by Fatherland—All Russia, a political bloc uniting powerful regional governors. Under Shoigu’s leadership, Unity came second place after the Communist Party, significantly overtaking the Fatherland bloc led by Prime Minister Yevgeny Primakov and Mayor of Moscow Yury Luzhkov. At the time, it seemed almost a miracle. Shoigu had bet on a lame horse, a seemingly spent force which attracted nobody, and won. As Putin saw it, Unity was the only political force capable of preserving the country’s integrity in case of victory.

Ever since, Putin has been in some sense indebted to Shoigu. The latter has been guaranteed a comfortable place in Russian politics — provided that he did not commit any serious blunders. In April 2012, when Putin was assembling a new government after his return to the office of president, Shoigu was invited to become the new governor of the Moscow Region. It was one of Putin’s most peculiar decisions. It gave Shoigu the opportunity to launch a high-powered political career, albeit in a comparatively weak starting position (though it should be recognised that the status of governor, particularly of such an important area as the Moscow Region, provides its holder with the status of a fully-fledged politician, not merely a state official.) Becoming a regional governor after 18 years leading one of the country’s most influential and successful law enforcement agencies almost seemed like an honourable discharge. And while Shoigu was indeed permitted to leave with high honours (for example, he managed to appoint Vladimir Puchkov as his successor to head the Ministry of Emergency Situations, with whom relations soon soured), his career trajectory appeared to be facing a downturn. But six months on, it became clear that it was too early to write off the legendary “saviour” just yet: in November 2012, when Anatoly Serdyukov was threatened with criminal prosecution, Shoigu replaced him as Minister of Defence.

Shoigu took a radically different approach to the office than his predecessor. Serdyukov had frequently clashed with his generals and the military establishment as a whole. Shoigu’s management style was more conciliatory; the army soon came to regard him as “one of us,” while he normalised relations with the defence lobby. Unlike Serdyukov, who relied on civilian appointees, Shoigu staffed the ministry with generals from the military and appealed to their sense of martial pride. For example, he returned cadets from the Suvorov Military Academy and Nakhimov Naval Academy to military parades. He launched Russia’s most ambitious military rearmament programme, introduced specialised formations for cyber warfare and Arctic troops, as well as strengthening the military’s special operations capability. It is difficult to know to what extent these developments can be attributed to the general trends of the time or Shoigu’s personal initiative. Although the former is more likely, Putin clearly felt that Shoigu deserved the credit.

So while Shoigu might have appeared to be “Teflon,” and lack obvious shortcomings in his work, he was nonetheless in a much more vulnerable position as Minister of Defence than in his prior role as Russia’s “saviour in chief.” He did not manage to retain any informal control over the Ministry of Emergency Situations (his successor eventually wriggled free of his influence), and flunked his ambitious plan for the Ministry of Emergency Situations to join the Ministry of Defence in 2013. Furthermore, in 2018 the ministry received a new head in the person of Yevgeny Zinichev, a former employee of the FSB and the Federal Protective Service, and a complete stranger to Shoigu. Professional difficulties also started to arise in his relations with Yevgeny Prigozhin, whose conduct in Syria was often contrary to the interests of the Ministry of Defence. Relations also soured with Rostec, whose interests are often institutionally opposed to those of the military establishment (in a classic example of complex customer-supplier relations). Finally, Shoigu had questions to answer in connection with some blunders in Syria (one of which concerned a downed Syrian IL-20 fighter jet; although Moscow laid most of the blame at Israel’s door, some of it ended up with the Russian armed forces.)

Political challenges are also mounting for Shoigu. For example, in recent months residents of towns outside Moscow have protested against unwanted garbage dumps to hold the capital’s trash. This unrest has indirectly hurt Shoigu’s position, given that the Moscow Region is governed by his protege Andrei Vorobyov. Meanwhile, the Ministry of Defence regularly comes under pressure from the FSB in the course of the latter’s anti-corruption investigations. Furthermore, Shoigu has also been criticised for his high-profile PR moves focusing on “patriotic education,” such as developing the youth army movement (which requires the creation of army groups in each school) or the “patriot” theme park in Kubinka, outside Moscow. Shoigu reacts very forcefully to all attacks, but particularly those from “his” side — that is, from pro-government voices. It must be remembered that it was Shoigu who ordered the exposure of the anonymous Shaltay-Boltai hacking group, which had broken into correspondence between defence officials. Similarly, the journalist Ilya Kramnik was dismissed from Izvestiya for criticising the minister (the offending article was even removed from the newspaper’s website after a call from the Ministry of Defence.)

Nonetheless, Shoigu’s Achilles Heel is not any mistakes he may have made, nor conflicts with influential people. His major weakness could be in overestimating his real proximity to Putin. Shogun is one of several figures who have managed to make a place for themselves in the regime, but still cannot fully be considered “one of us” by the president — perhaps not even allies or friends. While their fates may be closely tied, Shoigu never belonged to Putin’s closest circle of trusted confidants, with whom the president can share his most sensitive deliberations. Even the two men’s well-publicised mushroom picking holiday in the Siberian taiga has a simple explanation: Putin needed to discuss the practicalities of an upcoming deal with Turkey in connection with the launch of Operation Peace Spring, Ankara’s military intervention in Syria. It is well known that the Russian president fears information leaks, and strongly believes that walls, even in the Kremlin, have ears.

In conclusion, Shoigu’s closeness to Putin is purely functional, not personal. It is mostly due to the crucial importance of the position he holds. There was a time when Vladislav Surkov found himself in much the same position: when he started his political career in the 1990s, Surkov entered the president’s inner circle and became an architect of Russia’s entire political system. However, his services were no longer in demand once suspicions arose over his sympathy towards mass protests at the end of 2011. Eventually Surkov was compensated for this loss and was given the role of overseeing the government’s innovation strategy. He then returned to the Kremlin as the “curator” of its role in Ukraine, but it seems that since then he has lost the opportunity to act on the popular image widely ascribed to him as the “demiurge of Putinism.” That in itself is a recurrent feature of Putin’s system, in which influential figures can quickly find themselves consigned to the periphery of political life, as Viktor Cherkesov and Viktor Ivanov (both former heads of the Federal Drug Control Service and security officials) discovered. Others, such as Putin’s former “friend” Sergey Pugachyov, have officially fallen out of favour entirely.

In that sense, Shoigu’s position is no better nor worse than that of other functionaries who operate the machinery of the state with Putin on a daily basis. Could he become Russia’s next president? It is probable that he has forged too strong a political identity, a non-Putin identity, to ensure continuity. But that identity may well be in demand for the state’s political image, for example, when public figures are needed to support the pro-presidential bloc in elections. Shoigu could perform other roles in popularising the powerful, particularly when times are fraught. In any case, the far from painless process of political “transit” will certainly have need of a “saviour in chief,” even if his role is unclear.