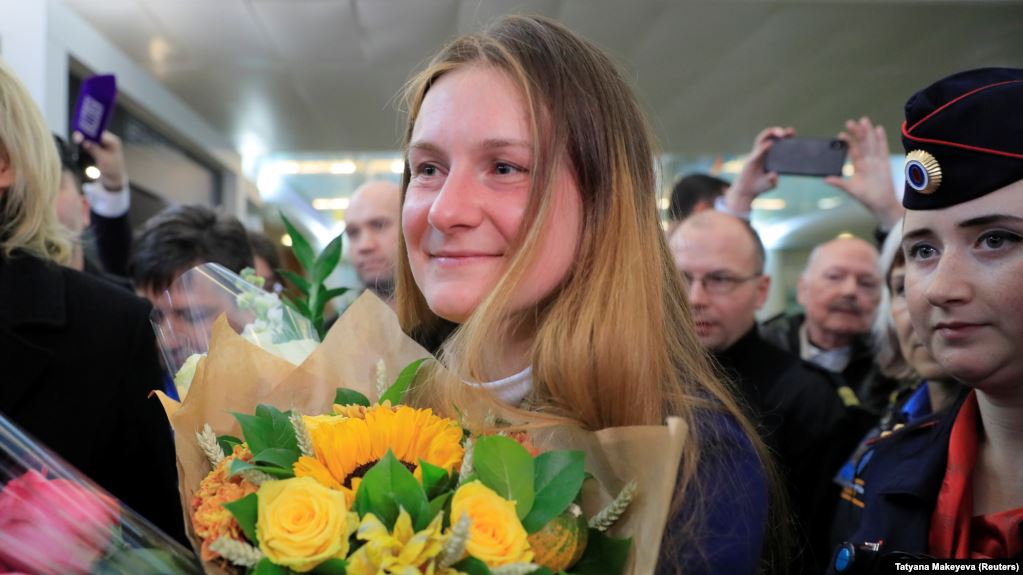 “’It’s all conspiracy theories. There is absolutely no proof of any of that, and I am not aware of any actions like this,’ Maria added, rejecting allegations that there were [sic] some ‘government person’ behind her.” Source: TASS Russian News Agency, November 4, 2019

Prior to her release on October 25 from a low-security prison in Tallahassee, Florida, where she served roughly 15 months of an 18-month sentence, Maria Butina gave an interview to 60 Minutes’ Lesley Stahl of the CBS network in the U.S.

Butina pled guilty in December to conspiracy to act in the U.S. as an agent of a foreign government, without filing as a foreign agent.

Butina told Stahl that Judge Tanya Chutkan was “absolutely wrong” in saying that Butina’s crime – working as an undeclared agent of the Russian government –presented a threat to democratic institutions in the United States.

Butina further claimed her prosecution was based on her nationality and not the merits of the case, saying if she had not been Russian, her efforts to cultivate ties with U.S. political groups and individuals – primarily conservative – “would have been called “social networking.”

“It’s all conspiracy theories. There is absolutely no proof of any of that, and I am not aware of any actions like this,” Butina said, “rejecting,” according to TASS, “allegations that there were [sic] some ‘government person’ behind her.”

TASS’s rendering of this portion of the 60 Minutes interview is misleading.

Simon Ostrovsky
Maria Butina, the convicted Russian foreign agent, claims she did not seek to influence US policy. But in this interview I worked on, @LesleyRStahl confronts her with her own private messages that were obtained by @60Minutes producer @apoolos. https://www.cbsnews.com/news/maria-butina-interview-full-transcript-watch-video-lesley-stahl-60-minutes-exclusive/ …

Maria Butina: The Russian accused of trying to influence U.S. policies for the Kremlin.
In an interview while she was incarcerated in a Florida federal prison, Marina Butina was defiant and resentful talking about charges that she worked as a Russian agent in the United States
cbsnews.com

First, TASS makes no mention of Alexander Torshin, whom Butina admitted had “directed” her activities as a foreign agent in the United States.

Torshin, who resigned as deputy governor of Russia’s Central Bank in November 2018 – one month prior to Butina’s guilty plea – was also a former Russian senator who has close ties to Russian President Vladimir Putin. According to Politico, a U.S. newspaper, FBI counterintelligence linked Torshin to a “U.S.-Russia exchange program” that the agency alleges “was an elaborate cover for a Washington-based Russian spy recruiting effort.”

Politico also reported that Torshin helped facilitate the so-called “Illegals Program” spy swap, in which 10 Russian operatives who had been living undercover in the U.S. for years (including “Anna Chapman”) were exchanged for four Russian citizens imprisoned by Russia on espionage charges.

NEWS: For more than a year my @SenateFinance staff has been investigating the NRA’s relationship with foreign agent Maria Butina and Russian government official Alexander Torshin and their role in the Kremlin’s efforts to interfere in the 2016 election.

Here’s what they found.

In April 2018, the U.S. Treasury Department sanctioned Torshin for election interference, while Spanish investigators have linked him to Russian mafia activity.

CBS reported it obtained thousands of private Twitter messages between Butina and Torshin, which apparently caught Butina off guard.

#tbt Butina in 2014 ‘traveled to Crimea to promote the arming of pro-Russian separatists. Her efforts there included pledging support to a leader of a militia group that violently seized a Crimean news outlet’ https://www.motherjones.com/politics/2019/02/nra-russia-maria-butina-putin-crimea/ … 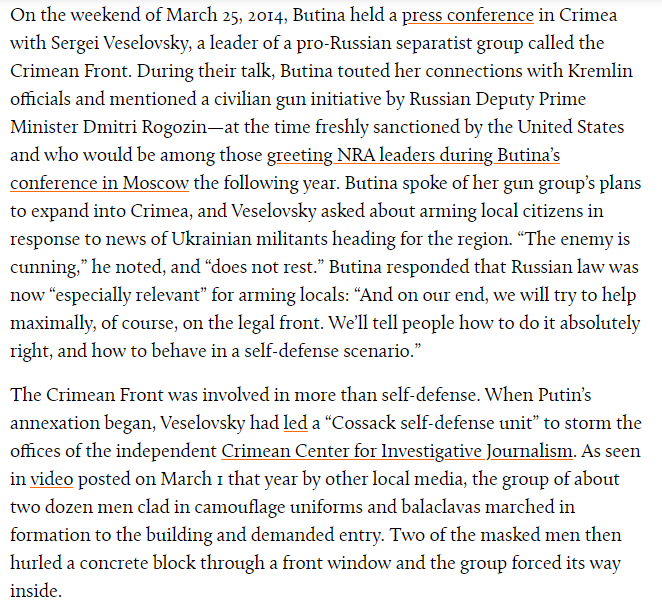 ‘In one of thousands of Twitter direct messages 60 Minutes obtained, [Butina] wrote to Torshin: “We made our bet. I am following our game.” Torshin replied: “…This is the battle for the future. It cannot be lost… patience and cold blood…”’ https://www.cbsnews.com/news/maria-butina-russian-agent-who-worked-to-infiltrate-the-nra-talks-to-60-minutes-2019-11-01/ …

Maria Butina, Russian agent who worked to infiltrate the NRA, talks to 60 Minutes.
Before she was deported to Russia, Maria Butina spoke to 60 Minutes about charges that she sought to influence U.S. policy for the Kremlin. See the full interview, Sunday at 7:30 p.m. ET and 7 p.m….
cbsnews.com

Stahl did not merely allege some government person was behind Butina, as reported by TASS.

Stahl said “you can get the impression that there’s some government person higher than Torshin kinda directing this whole thing, pulling the strings,” citing actions that implied “they needed to run the decision up to a more senior level.”

“It had conflation, obfuscation, changing the subject, accusing you of being sexist, accusing the American people of being racist against Russians whenever the questions got difficult… trying to change the topic. Partial denials,” Demers told 60 Minutes.

As Stahl noted, upon being greeted with a “media frenzy” after returning to Moscow, Butina “immediately started giving interviews about the conditions of her incarceration.”

Likewise, the TASS article, titled “Butina says being in US prison was ‘torture’,” hit on many of those disinformation themes, while ignoring most of the evidence presented by Stahl and opting not to mention Torshin at all.

Polygraph.info thus finds TASS’s presentation of the Butina interview to be misleading.