Some question whether an American University program, inspired by a Russian ambassador, presents too favorable a view of that country. 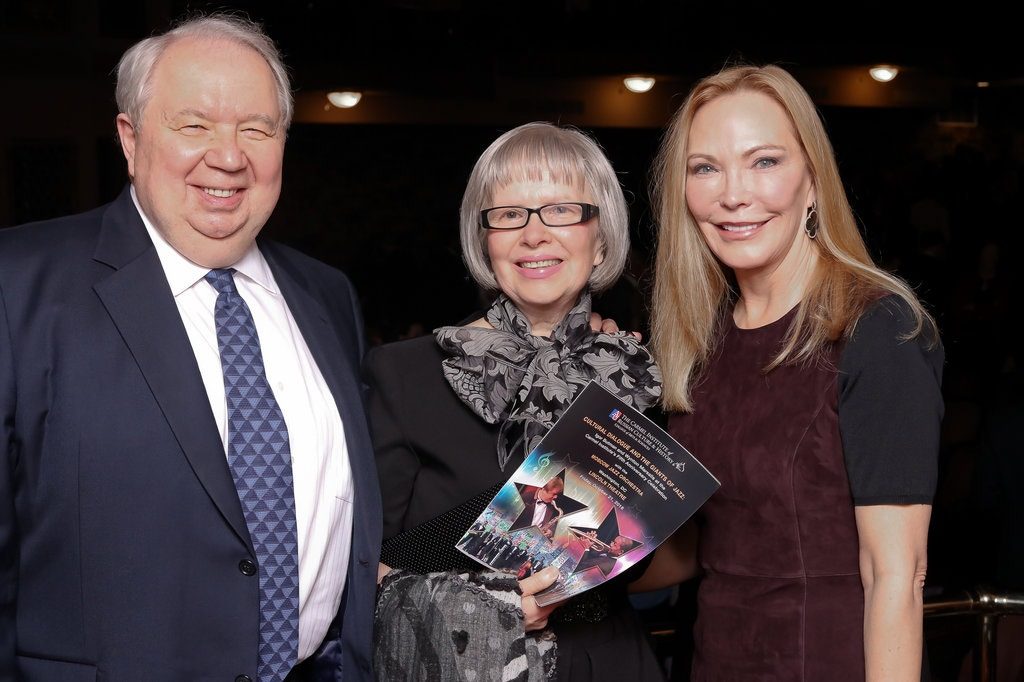 The American woman who created the program, Susan Carmel, she noted, had even been given a medal of appreciation by President Vladimir V. Putin.

None of this surprised the ambassador. After all, he told Ms. Butina, the idea for the program had been hatched at his residence, also over breakfast, according to her notes. 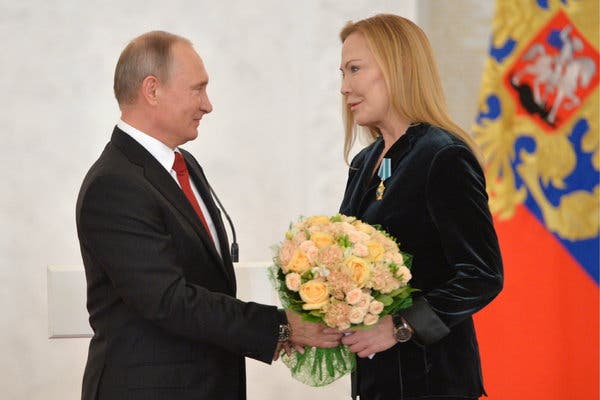 Russia’s President Vladimir Putin with Susan Carmel, who received an award during a 2016 ceremony at the Kremlin.Credit…Alexei Druzhinin/TASS, via Getty Images

During his nine years as ambassador, which ended in 2017, Mr. Kislyak spearheaded a number of efforts to use Russian culture as a diplomatic tool. He enlisted one oligarch to build a “Russian Lounge” inside the Kennedy Center for the Performing Arts and recruited help to rescue a financially troubled California state park on the site of a 19th-century Russian settlement.

But those efforts hardly matched what he helped to inspire at American University, a robust program at a respected United States college that celebrates Russia’s art and its shared history as an American ally.

The program, the Carmel Institute of Russian Culture and History, is designed as a peacemaking initiative, and it has sponsored events that featured performances by well-known Russian artists, such as the jazz musician Igor Butman, and the star pianist Denis Matsuev. Other events have focused on bridge-building topics, like Russian-American cooperation in World War II and during the exploration of space.

Hundreds of people from a variety of circles attend the events. Many are geared to students, who are ferried to the Russian Embassy from six area colleges on buses and treated to evenings of food and Russian films. At some events, wine was served, students said, though that practice ended several years ago.

“What we are trying to do” with the program, Anton Fedyashin, the initiative’s then-executive director, said in 2012, “is to expose American students to Russia as a cultural superpower.”

But critics say the Institute presents too favorable a perspective on Russia by focusing on the glories of its arts and history at a time of aggression in Ukraine and election meddling.

“The big question is,” said Hope Harrison, a Cold War scholar at George Washington University, “Is this yet another example of trying to expand Russian influence in the U. S.?” 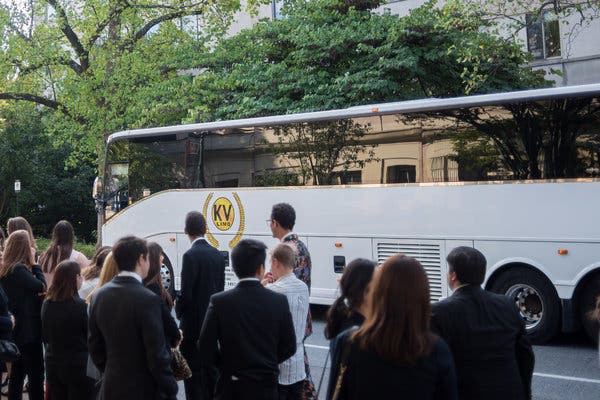 American University students wait to board a bus to the Russian Embassy for a film screening in September.Credit…The New York Times

The university has rejected such criticism, arguing that the Institute is a tailored program that steers clear of contemporary political debate so as to promote dialogue and cultural appreciation free from current tensions.

“The worse the relationship is in politics, the more important it is to see the other side of the enemy,” said Eric Lohr, a university history professor who directs the Institute.

The Carmel Institute, first called the Initiative for Russian Culture, was born in 2011, at a time when the Kremlin’s efforts to influence American opinion were not as closely scrutinized as they are today. The Russian government has acknowledged a soft-power campaign to promote the country as a cultured, benevolent global force. Those efforts have been enhanced at times by the generosity of Russian oligarchs, acting independently or at the behest of the Kremlin, who have underwritten gifts to Western arts organizations or financed exhibitions and performances abroad.

In this case, the program inspired by the former ambassador exists at a college whose very name is laden with symbolism, one that has a history of training diplomats and is a close neighbor to Washington’s Embassy Row. More than 20,000 people have attended Carmel programs, according to the Institute, which also pays for student trips to Russia, scholarships for study there and support for Russian exchange students in America. Its activities are sometimes mentioned in the Russian Embassy’s weekly newsletter alongside items about Mr. Putin’s latest remarks and other diplomatic news.

Alia Carlton, an American University political science student who has attended Institute events, said she did not find the Carmel program biased. “The general message is open-mindedness and unity,” she said. “The only stuff I knew about Russia was all negative. I wanted to get outside my comfort zone.”

Other students, though, said they felt that Institute events ignored current tensions to focus on a historic image of Russia and its culture.

Jessie Drago, an American University graduate, said that, while she found the university’s history classes balanced, she stayed away from the Institute because of its close relationship with the Russian Embassy.

“It did seem like the Carmel Institute was making huge efforts to give Russia a better reputation with the students,” she said, calling the program “an effort to shed the Cold War ‘enemy’ idea.” 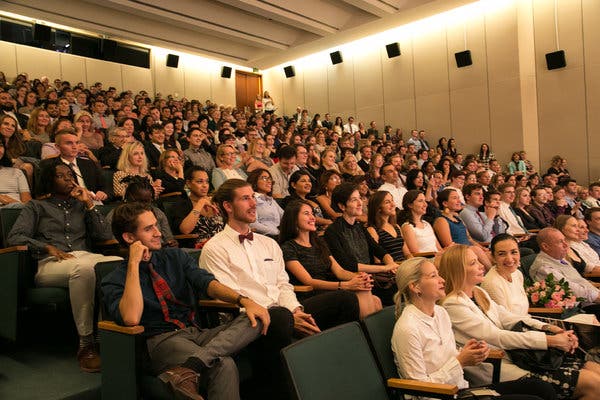 The audience for the Institute-sponsored United States  premiere of the 2015 Russian film “Battalion,” at the Russian Embassy’s Tunlaw Theater, in 2016.Credit…imagelinkphoto

Anders Aslund, a senior fellow at the Atlantic Council, an international relations research group, said it worried him that a program at a United States university had become so involved with the Russian Embassy and was presenting content to students that was, in his opinion, one-sided.

The university countered such criticism in a statement pointing to the film “Stilyagi,” or “Hipsters,” shown at the embassy, as evidence of even-handedness. It depicts the nonconformist, underground jazz scene in 1950s Moscow and, the statement said, “illustrated the dangers faced from being counterculture in Soviet Russia.”

Michael S. Roth, the president of Wesleyan University, who has published a book about free speech on college campuses, said students are able to sort through a one-sided presentation as long as a university places it in context and presents alternative viewpoints.

“If this is part of an intellectually diverse approach to Russian culture, then it’s helpful,” said Mr. Roth, who was not aware of the Carmel program, “but if it is not, if it is the most dominant note about Russian culture at the university, then that’s a problem.”

University officials say the broader academic curriculum — the courses it offers, the speakers it hosts, the teachers it hires — presents a straightforward view of Russia, one that does not avoid negative impressions. Events and lectures elsewhere on campus, they said, had addressed topics like “the use of bots, trolls, fake news; the manipulation of the political process; and the role of foreign governments in the 2016 election and beyond.” They cited, for example, a 2018 graduate course on disinformation that discussed Russian election interference and “the evolving use of propaganda” by “international terrorist organizations and nation-states.” The university also provided an article written by Professor Lohr that discussed Russia’s history of interventions in foreign elections.

The founder of the Institute, Ms. Carmel, a 67-year-old philanthropist who runs a commercial real estate firm, describes her cultural mission as one of bridge-building.

She declined to be interviewed but she addressed questions in writing, taking issue with critics who describe the program as biased.

“The Institute is neither a think tank, policy institute, nor a political science course,” she wrote. “As such, most — if not all — of the films screened have dealt with Russian history from the Czarist era through the Soviet era, predating President Putin and the more current political issues.”

Ms. Carmel has acknowledged in the past that she was inspired to create the program after discussions with Mr. Kislyak, who was the Institute’s honorary co-chairman for years. Asked to comment on Ms. Butina’s account, she instead said the program “was formed following multiple meetings at American University.”

Ms. Carmel’s philanthropy has included generous support of the Washington National Opera and several medical initiatives. In addition to the medal she received from Mr. Putin in Moscow in 2016, France awarded her the rank of Chevalier in its Légion d’Honneur in 2012.

Beyond the Institute, Ms. Carmel has helped finance other events that celebrate Russian culture. She threw parties at Donald Trump’s Mar-a-Lago in 2015 and 2016 that honored Valery Gergiev, the conductor of Russia’s celebrated Mariinsky orchestra, an ally of Mr. Putin and a supporter of his annexation of Crimea. The following year, she helped underwrite a concert at the National Cathedral, again showcasing Mr. Gergiev and billed as “A Concert for Unity.” American University students were invited; Mr. Kislyak’s successor as ambassador spoke; and the Russian media beamed home images of cultural cooperation.

Mr. Kislyak, who became ambassador in 2008, grew to be a popular Washington insider whose avuncular style helped build many relationships. During his last years in Washington, though, he developed into a more controversial figure as his meetings with Trump advisers became a subject of investigation. He returned to Moscow in July 2017.

But for years he attended Carmel events. He was on American’s campus, for example, in 2012 when a bust of Tolstoy, a gift by a Russian sculptor, was installed between buildings.

The Carmel Institute drew attention last year after the F.B.I.’s arrest of Ms. Butina, a gun-rights activist from Russia who came to the United States to secure a master’s degree in international relations at American. She ultimately pleaded guilty to a charge of failing to register as a foreign agent while working to advance Russia’s interests by infiltrating U.S. political circles.

Ms. Butina, who says she never operated as a covert agent and simply wanted to better political relations, was released last month after serving most of her 18-month prison term. According to the writings found on her computer, she said she embraced cultural centers like the Carmel Institute for their potential to soften American public opinion toward Russia.

“Pro-Russian cultural centers for developing literature and music,” she wrote, “no doubt play an important role in preparing the background and developing informal communication.”

“It fit with her notion,” said Robert Driscoll, her lawyer, “that what builds relations, what brings people together is not abstract political negotiations, but people enjoying movies together, or they like art or guns or religion. That’s what builds bridges between people.”

A few days after her 2017 breakfast with Mr. Kislyak, Ms. Butina joined other American University students from Russia, Ukraine, Belarus and Azerbaijan on an Institute trip to Gettysburg College, where they discussed Russian-American relations with students from the United States.

Her reaction to the trip was later included in an article that was posted on the Carmel Institute’s American University website. “It helped us to focus,” she said, “on similarities that unite us more than on the differences that divide us.”

After her arrest, though, someone took down a photo of the visit that included Ms. Butina and edited her comment out of the article.