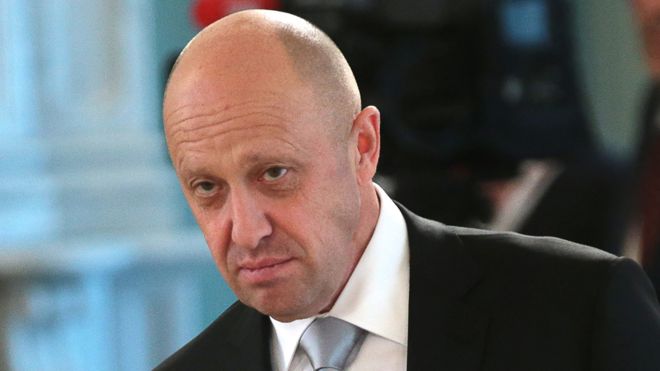 The wealthy Russian businessman nicknamed “Putin’s chef” – Yevgeny Prigozhin – has his fingers in lots of pies.

He made his fortune running catering businesses in the 1990s – hence the nickname. And he joined President Vladimir Putin’s elite circle when the Russian leader started dining at his luxury floating restaurant in St Petersburg, called New Island, in 2001.

Like many other Russian oligarchs, Mr Prigozhin, 58, has branched out into various businesses, uses shadowy offshore firms and enjoys a lavish jet-set lifestyle.

But the US government is trying to clip Mr Prigozhin’s wings: it has stepped up sanctions against him and his businesses because of his alleged meddling in US elections.

He has denied the Western allegations, but his business ventures remain very opaque.

He came to prominence in St Petersburg, Mr Putin’s home city, but was not in the original group of Putin allies, who formed a dacha (country-house) club called Ozero.

In his twenties, before becoming a hot-dog salesman and successful caterer, he was jailed for nine years for robbery and fraud.

Russia’s “shock therapy” capitalism of the 1990s created many business opportunities for criminals, as they could call on friends to fend off aggressive rivals.

Mr Prigozhin has kept a low profile for years, but in 2011 he told a St Petersburg newspaper about a children’s tale he once wrote, which featured midgets defending a king against enemies.

How did he get involved in US politics?

The US Treasury announced new sanctions against Mr Prigozhin on 30 September, accusing him of steering Russian efforts to influence the US 2018 mid-term elections.

He was implicated again through the infamous Internet Research Agency (IRA), identified as a St Petersburg “troll factory” which, US authorities say, used fake internet accounts and fake news to influence US voters in the 2016 presidential election.

Mr Prigozhin, his Concord Catering firm, business associates and IRA were indicted by a US Grand Jury in February 2018 over that election interference.

The charges were drawn up by US Special Counsel Robert Mueller, who was investigating alleged Russian attempts to help Donald Trump’s election campaign.

Mr Prigozhin shrugged off the indictment, saying: “Americans are very impressionable people; they see what they want to see. I’m not at all upset that I’m on this list. If they want to see the devil, let them see him.”

The latest sanctions target Mr Prigozhin and some of his luxury assets over “influence operations” linked to the US 2018 mid-term elections.

Once again, the US government says, his IRA used “fictitious personas on social media and disseminated false information”. The activities are not thought to have distorted the US election results.

The US believes he funds the agency via Concord Catering.

The US sanctions name three private jets and a luxury yacht allegedly used by Mr Prigozhin, his family and associates – luxuries registered in the Seychelles and Cayman Islands offshore tax havens.

US individuals and firms are now prohibited from doing business with him or providing services for his jets and yacht, called St Vitamin. The jets have flown many times to destinations in Africa, the Middle East and Europe in recent years, the US statement says.

Concord Catering has now been ordered by a Moscow court to pay compensation to parents over a food poisoning outbreak.

Research by Facebook and internet specialists at Stanford University points to opinion-forming operations on social media in Africa, linked to Mr Prigozhin.

The Russian origins of the “inauthentic” behaviour were masked by using local nationals, it said.

The second network targeted Sudan and the third focused on Libya.

A BBC investigation found that at least six candidates were offered money by Russians in Madagascar’s 2018 presidential elections.

Mr Prigozhin dismissed the Facebook allegations, saying the US media giant was “indulging in PR for itself”.

A year ago Russia sent 175 military instructors to the Central African Republic (CAR) – a country racked by militia violence – to help the army of President Faustin-Archange Touadéra.

Wagner mercenaries are reported to be active in CAR, where Russia has won gold and diamond mining concessions. France, CAR’s former colonial master, also has a military presence in the country.

It was while trying to investigate a suspected link between the mines and the mercenary group that three Russian journalists were shot dead in an ambush in 2018. Nobody has been charged in connection with it.

But Lobaye Invest is shrouded in secrecy, and Mr Prigozhin has denied any link to it.

Russian soldiers belonging to an outfit called Sewa Security are protecting President Touadéra. It is suspected of being a front company for Wagner.

What else has Mr Prigozhin been doing?

His alleged link to Wagner is through his military catering business: under President Putin he won a big deal to feed the Russian armed forces.

The US Treasury has put Wagner on the sanctions list too, saying it “sent soldiers to fight alongside separatists in eastern Ukraine”.

It says Mr Prigozhin “has extensive business dealings” with the Russian defence ministry.

He is heading a new pro-Kremlin media group called Patriot. The group says it will counter “anti-Russia” media that “do not notice the good things that are happening in the country”.

Its combined audience is reckoned to be greater than that of state news agency Tass or pro-Kremlin broadcaster RT.

Mr Prigozhin said he was glad to head Patriot’s board of trustees.

Research by the BBC’s Laurence Peter