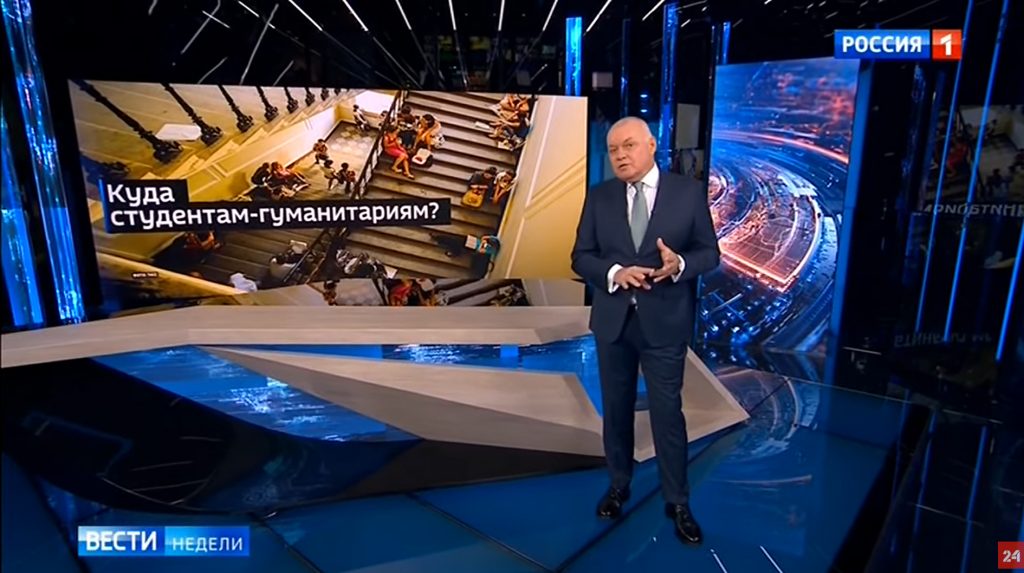 Dmitry Kiselyov, the Russian state media system’s most prominent pundit, argued on his show Vesti Nedeli that higher learning in the humanities breeds social unrest. His November 3 segment on the topic can be found in full here; it is paraphrased in brief below.

There are too many humanities majors for this country to handle, and their educational process isn’t intensive enough to stop them from acting stupid. Two young women in Moscow State University’s journalism department have become activists and started collecting signatures for Azat Miftakhov — they find it far more interesting to protest and affirm themselves than to study. The higher education system is a conveyor belt churning out unhappy people. Yes, we’re now seeing fewer commercial scams [in higher education], but there’s another problem: what to do with the millions of degree holders who graduate from those scams. The production of humanities majors is a business, and a lot of people get into college on bribes, so the quality of the graduates is low. They don’t get hired, and then their expectations and ambitions revert into dissatisfaction with society, with the country, and with the government. Why did the Arab Spring begin? Because Tunisians got a free higher education in France, and then they came back, and they didn’t want to become rank-and-file laborers. And those unfulfilled expectations caused social tension. Our government should think hthose consequences, too.