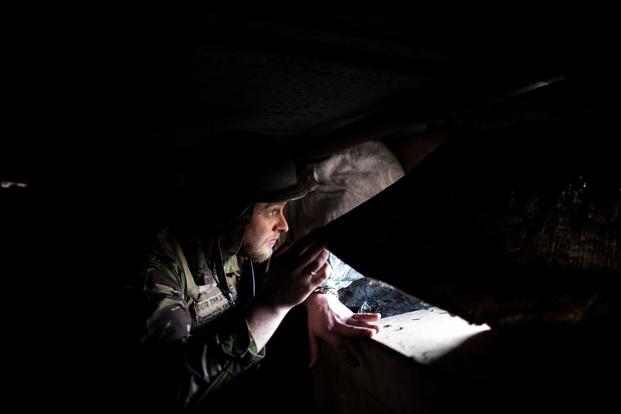 International economic sanctions are taking a toll on Russia’s ability to use drones and conduct electronic warfare against Ukrainian forces, according to a top Ukrainian military official.

“Sanctions [are] like a virus,” he said following his speech at the Association of Old Crows’ Symposium. Military.com spoke with Pavlenko after his keynote speech at the nonprofit organization’s conference in Washington, D.C., about the applications of electronic warfare in East Ukraine.

The Pentagon has long watched the war in Ukraine as a blueprint for where it could apply its own lessons and has issued studies that could help service members understand where and how an attack manifests on the electromagnetic spectrum — and how best to deny the adversary.

Russian-backed separatists have been jamming signals to misdirect or take out commercial drones Ukrainian soldiers use to conduct aerial surveillance.

During his speech, Pavlenko said Russia has been able to best even some of the simplest technologies both countries use, such as radio repeaters. In 2015, Russian forces were able to infect repeaters — which act as a both a radio receiver and transmitter to resend signals at longer distances — with a virus. Russia has jammed radio frequency bands and frequently targeted Ukrainian soldiers’ smartphones, blocking cell phone signals as far as 20 miles from their frontline positions. They also send taunting text messages.

Most notably, as of 2017, Ukraine has lost nearly 100 drones due to attacks on their navigation systems through GPS spoofing — transmitting inaccurate coordinates to the drone to throw it off its course, Pavlenko said. Russia has also used ultra-high frequency receivers on its own drones to cripple Ukrainian counter-artillery radar batteries and subsequently call in a mortar strike on the battery’s location.

The attacks, first observed in 2014, have U.S. service members on guard as they continue to train Ukrainian troops on the western side of the country.

But Pavelenko said that while Russian propaganda churns — to show the world that “Russia is strong” — Kyiv officials have observed a reduction in electronic warfare personnel and equipment, especially in the Russian-controlled Donbass region.

Before the conflict surged as a result of Russia’s annexation of Crimea, Moscow invested in “the best” equipment, such as advanced spectrum analyzers to measure signal magnitude, as well as receivers to spot audio or electrical signals, he said.

But “they have limited ability to use [these] advanced technologies” right now, said Pavlenko, who previously served as chief of electronic protection for the EW department on the General Staff of the Armed Forces of Ukraine.

As sanctions continue, “time is working against them,” because the equipment degrades and there is little money to upgrade, fix or buy new tools for signals intelligence, he explained. The Trump administration imposed new sanctions on Russia in August and again in September.

As the Pentagon continues to debate how it can maneuver in this space, Pavlenko’s message was clear: This type of warfare involves multiple adversaries sparring in a domain that has real-world implications.

“Electronic warfare is a never-ending competition — offensive and defensive activity,” he said.

“In order to win, you always [have to be] a step ahead first. [But] just because you find some amazing, defensive solution, the enemy will always find” the opposite solution.