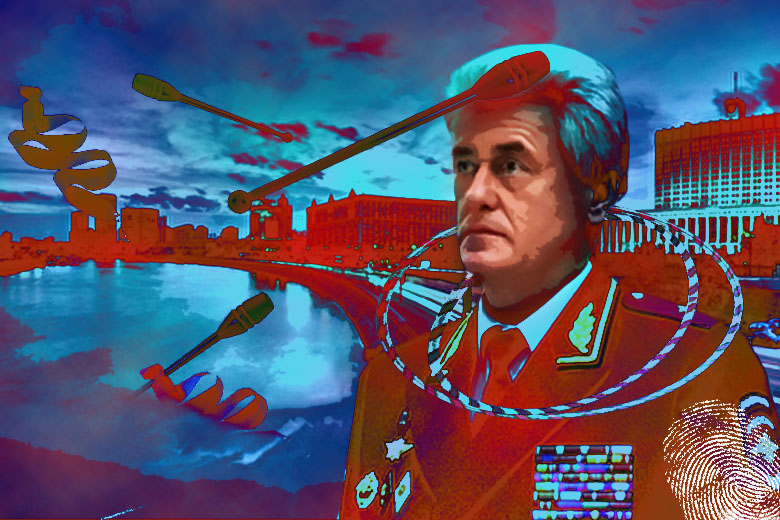 The appointment of the new head of the anti-drug department of the Moscow Directorate of the Ministry of Internal Affairs was by no means accidental. Maybe Head of the St. Petersburg Suvorov School Andrey Yanishevsky is really the best candidate for this, however, the very close relationship of his wife with Alisher Usmanov’s family could not but play a role.

On September 12, it became known that Andrey Yanishevsky became the new head of the drug control department of the Main Directorate of the Ministry of Internal Affairs in Moscow. He took the place of Yury Devyatkin, who was previously dismissed in connection with the case of journalist Ivan Golunov, on whom security forces had planted drugs.

From 1990 to September 2019, he took various managerial positions, from the deputy head of the department for combating theft of socialist property of the Internal Affairs Directorate of the Moscow District Executive Committee to the head of the St. Petersburg Suvorov Military School of the Russian MIA.

He was awarded three Orders of Courage, medals “For Courage,” “For Distinction in the Protection of Public Order,” and the honorary title “Honored Officer of the Internal Affairs Bodies of the Russian Federation.”

However, the Telegram channel Drugoy Roldugin drew attention to another detail; namely, his family ties.

Yanishevsky’s eldest son, Vitaliy, is a candidate of legal sciences; he passed his Ph.D. Defense on the topic “The Russian Federation as a subject of civil liability” several years ago. According to the Telegram channel, he was associated with a certain Fund for Assistance to the Operational Units of the Ministry of Internal Affairs. “It’s common for security officials to take bribes through such offices, but no one caught anyone in this case, not even planted drugs, so let’s omit this information,” Drugoy Roldugin wrote via Telegram.

Yanishevsky’s daughter, Yana, graduated from the Moscow State University of Foreign Affairs and the law course at Cornell Law School, located in Ithaca, New York, US. She starred in the film Ment v zakone-8. It is reported that she drives around Moscow in a new Audi registered at 31/2 Novy Arbat Street, in an apartment with an area of 115 square meters, which is indicated in the general’s declaration as belonging to his wife.” However, Yanishevsky has long been divorced from her mother. Leaving her a 125-meter apartment in Zamoskvorechye district, he now resides with a certain Irina Tsareva. From her previous marriage, she has two daughters, Yulia and Olga, who get along well with Yana Yanishevskaya. Olga even calls her her sister, and they went to the same school.

Back in 2010, Vedomosti reported about Tsareva, ex-wife of Deputy Minister of the Internal Affairs in the Chechen Republic Andrey Yanishevsky. More than 10 hectares of land, two apartments, a summer residence, as well as a pigsty, two cowsheds, a dairy farm, and a slaughter house were recorded in her name. Another 1.8 hectares of land and a house of 685 square meters was then owned by the general’s underage daughter.

This is confirmed by the Uniform State Register of Legal Entities. Tsareva has been in business since the mid-2000s. She was the founder of the Konstantinovo Agro pig farm in the Ramensky district of the Moscow region and was engaged in poultry farming (Konstantinovo Agroservice LLC) and construction (Financial and Construction Corporation Podmoskovye and RitmikStroy LLC). In addition, she is a co-founder of the Non-Profit Partnership for Gasification and Improvement Zhdanovskoye and a 100% owner of the elite equestrian sports complex Zhdanovskoye Podvorye. At the same time, in addition to farming, she holds the position of executive director of the All-Russian Federation of Rhythmic Gymnastics, whose president is Irina Viner-Usmanova, the wife of the famous oligarch, who, by the way, trained Alina Kabaeva. The same women – Tsareva and Viner-Usmanova – are the owners of this federation, as well as Tsentr Progressa Khudozhestvennoy Gimnastiki (‘Center for the Progress of Rhythmic Gymnastics’) LLC. Tsareva was also involved with the Charity Fund “Center for Support and Development of Rhythmic Gymnastics” and the Regional Public Organization “Sports Federation of Rhythmic Gymnastics of St. Petersburg.”

The Telegram channels suggested that it was this extremely distant and winding relationship with the Usmanovs that played a positive role in the release of Golunov.

To recall, Meduza special correspondent Ivan Golunov was detained by police in the center of Moscow on June 6. According to the police, about 4 g of mephedrone was found in his backpack, as well as a whole drug laboratory and over 5 g of cocaine was allegedly found in his apartment during the search. Golunov was charged with an attempt to sell drugs.

The Meduza special correspondent said he had been planted drugs. He also told the court that recently he had received threats in connection with his journalistic investigation. The arrest of the journalist caused a wave of public outrage. Subsequently, an examination did not reveal traces of narcotic substances in the journalist’s handwipe. Nor were there his fingerprints on the items seized from his apartment during searches.

On June 11, Head of Russian MIA Vladimir Kolokoltsev announced the lifting of all charges from Golunov due to the lack of evidence of his guilt. In addition, the Internal Security Division of the Ministry of Internal Affairs conducted an audit, the results of which were transferred to the Investigative Committee.

More than three months after the incident, President’s Press Secretary Dmitry Peskov said that so far there were no results of an internal audit in the Investigative Committee in connection with the journalist’s case.

As a policeman, who asked not to be named, later told the Telegram channel Baza, a high-ranking officer of the Federal Security Service in Moscow turned to one of the heads of the Main Directorate of the Ministry of Internal Affairs in Moscow with a personal urgent request “to clamp down one person.” The following details were provided to the chief police officer, whose name is also not reported: Ivan Valentinovich Golunov, date of birth, residence address, and registration address. The former redirected the request to “organize a criminal investigation” to Head of the Drug Enforcement Agency of the Moscow police, Yury Devyatkin, but was refused, as the head of the anti-drug department said he was too busy. Then another head of the Internal Affairs Directorate in the Western Administrative District of Moscow – Andrey Shchirov – was assigned to the case. He ordered his subordinates to deal with Golunov. “We did everything we were asked and only later found out that we’d better not,” a source said, adding that the case against the journalist was organized in a haste, without proper cultivation and preparation.

It is known that Golunov was preparing a new material about the funeral business, which mentioned the names of two senior officers of the FSB in Moscow and the Moscow region, namely, Head of the department, Colonel General Aleksey Dorofeev, and his assistant, Colonel Marat Medoev. According to his investigation, people close to both security officials control the funeral market in the Moscow region. After a mass brawl at the Khovanskoye cemetery, former operative of the anti-corruption department of the Ministry of Internal Affairs, Artyom Ekimov, who became director of the Ritual State Institution, was ordered to restore order in the capital’s funeral market. After Ekimov appointed Stavropol businessman Valerian Mazaraki as his deputy, people from Mazaraki’s circle took the helm of almost all Moscow cemeteries and Ritual branches.

In addition, Valerian Mazaraki’s daughter-in-law has a plot of land in the villa community Lesnaya Bukhta on the shore of the Istra Reservoir, right next to the plots of Medoev and Dorofeev, as well as Boris Korolyov, the alleged son of Head of the FSB Economic Security Service, Sergey Koroyov. It was reported that FSB workers speculated on land and built cottages on the site of settlements for equity holders. At the same time, Dorofeev bought his plot from businessman Valery Vasilyev, the father of Andrey Vasilyev, a former FSB officer, who was arrested in spring as part of FSB Colonel Kirill Cherkalin’s case.

In turn, the Anti-Corruption Foundation found expensive property in possession of the Medoev family, as well as its connection with the business of the funeral company Ritual and contracts with the Ministry of Defense.

In particular, it was reported that in 2011, retired Major-General Igor Medov (father) and his wife became the owners of a country house in the municipality of Limbach (Slovakia), which was estimated at 250-500 thousand euros. A Slovak real estate company Medeva is registered in the name of Medoev’s mother. Next to the parents’ house is the villa of their daughter, Maya Medoeva, and her husband Pyotr Ovsyannikov. Maya owns the company Avtotekhtsentr Sokol, and her husband works as director of the control and accounting service in the Department of Labor and Social Protection of Moscow According to Novaya Gazeta, Ovsyannikov is associated with the largest supplier of footwear for law enforcement agencies, the Faraday company. For several years, it received contracts worth more than 11 billion rubles ($170 mln) without competition.

After the detention of Golunov, the connection between the son of Interior Minister Vladimir Kolokoltsev and funeral services came to light. One of the largest contractors of Ritual is the private security companiy Alfa Horse, a co-owner of which – Emilia Leshkevich – is also a co-founder of the company Pervaya Ritualnaya Kompaniya together with Sardal Umalatov. The latter is mentioned as a co-owner of Burger Street M together with Alexander Kolokoltsev. However, to date, the company has already been liquidated, and the son of the head of the Ministry of Internal Affairs ceased to be its owner in 2013. In an interview with Ksenia Sobchak, Golunov stated that, as far as he knew, Kolokoltsev’s son was a marginal participant in the case of funeral companies.

After Golunov’s investigation was published, it became known that Dorofeev and Medoev’s sister re-registered their property in the name of the Russian Federation. Mazaraki’s son, Egor, who owned at least eight companies, of five of which he was the sole owner, sold all his Russian assets in a few days.

In late August, it became known that Medoev left his post. According to the BBC Russian Service, he was seconded from the FSB to Gazprom’s security service.

Of course, this set-up of Golunov was not conceived in order to replace the head of the anti-drug department, but in this situation, third-party forces decided to take advantage of the opportunity. According to the Telegram channel Dvuglav, Minister of Internal Affairs Vladimir Kolokoltsev became the main beneficiary in the Golunov case. He dismissed two generals whom he did not like (but could not do that before because of their high patrons). By the way, one of these generals was to replace Oleg Baranov, head of the Main Directorate of the Ministry of Internal Affairs for Moscow, who is close to the Minister. Then, an opposing group from the FSB, which was hovering over Baranov, was hit, and another security officer close to Kolokoltsev, Yanishevsky, was “pulled out of the netherworld.”

Thus, given the connection between Yanishevsky and Kolokoltsev, as well as Usmanov, we can assume it was a common oligarchic-ministerial clan. Especially since the specifics of each other’s activities are well known to both Kolokoltsev and Usmanov – the oligarch’s father was Tashkent prosecutor, and the son of the Minister of the Interior is now successfully running a business.