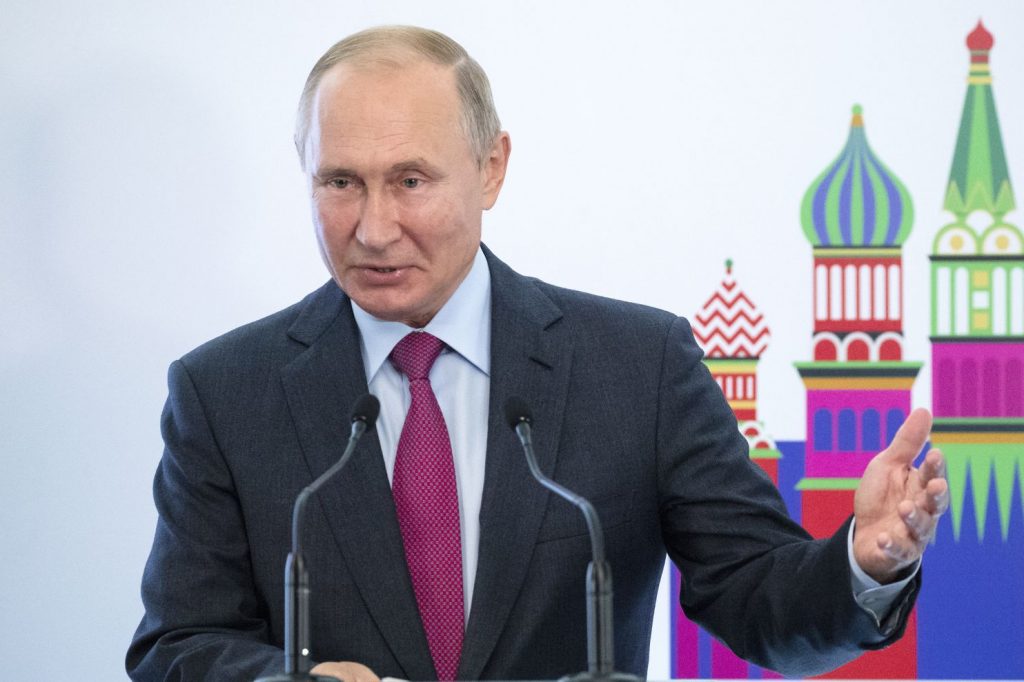 Garry Kasparov is chairman of the Renew Democracy Initiative and the author of “Deep Thinking: Where Machine Intelligence Ends and Human Creativity Begins.”

Four days later, Putin launched the largest security operation of his 20-year reign. Raids took place in 43 cities across Russia, with police breaking into the offices and homes of opposition groups and activists, confiscatingdocuments, computers and even coffee machines.

The supposed show of strength was evidence that Putin’s grip on Russia isn’t as tight as he pretends. He has switched from propaganda to a campaign of violence, first against the protesters and then with raids intended to produce terror, not arrests. Bystanders can be arrested and sentenced to years in prison for assaulting a member of the state security forces — a statute used against me in my own arrest seven years ago.

Putin’s popularity was already sinking as Russians struggle with economic stagnation — stagnation that has been exacerbated by Western sanctionsprompted by his war against Ukraine. The crackdown is almost certain to further damage his support.

Whenever Putin faces domestic strife, he looks abroad. Usually this means stirring up trouble so he can portray himself as the bold defender of the motherland, although more Russians now openly question his deadly and costly adventures in Syria and Ukraine. In the current dangerous standoff between Saudi Arabia and his client Iran, Putin will be happy to fan the flames of conflict, knowing it will spike the price of oil — a boon for the oil-dependent Russian economy and for his hold on power.

Yet even as Putin’s position grows more precarious, he has been thrown a lifeline by two supposed leaders of the free world, President Trump and French President  Emmanuel Macron. Trump’s inexplicable sycophancy toward Putin is well-documented. France has increased trade with Russia despite sanctions, and Macron recently echoed Trump in expressing support for Russia’s return to the group of leading industrialized economies. The idea is baffling, given that Russia was ejected from the Group of Eight in 2014 for invading and annexing Crimea, the Ukrainian peninsula that remains under Russian domination.

When the West sends these all-is-forgiven messages to Russia, Putin immediately exploits them to show Russian elites that he’s still the big man, that only he can get sanctions lifted — and that he’s not going anywhere.

Instead of deterring Putin from further acts of aggression, whether it’s election interference or invading a neighbor, such appeasement tells him only that there’s no reason to change his ways. What is needed is a united front of democratic nations declaring that Russia will never come in from the cold until it abandons its repression at home and its malign adventures abroad.

I have helped organize an open letter calling for such a response, with signatories prominent in politics, diplomacy, law, the arts and human rights, drawn from around the world and across the political spectrum. The letter urges democratic leaders to deny Putin the international legitimacy he craves and to cut off the economic ties that he uses to spread corruption and to fund his domestic repression, hybrid wars and global assassination campaigns.

It cannot happen soon enough. The last thing the United States needs heading into a presidential election year is an emboldened Putin, this time with his favorite candidate wielding the powers of the presidency. It was astonishing that in the Democratic presidential debate last week, the word “Russia” wasn’t mentioned. Democrats appear to be joining Trump and the Republicans in ignoring what U.S. intelligence agencies regard as among this nation’s gravest national security threats.

On Monday, news broke that Russia had breached FBI communications systems in 2010, while President Barack Obama was still touting his absurd “reset” with Putin. Trump has managed to make things even worse. Why bother bugging the president’s phones if he’s going to ring you up and tell all on his own? Imagine how much a former KGB man such as Putin could get out of him in two hours of unsupervised conversation like they had in Helsinki last year.

I was honored to speak last Thursday at the Black Ribbon Day Conference in Toronto, devoted to the 80th anniversary of the notorious Molotov-Ribbentrop Pact between Adolf Hitler and Joseph Stalin that paved the way for World War II. The gathering had two main themes: reminding the world that Stalin was Hitler’s murderous partner for nearly two years and sounding an alarm about Putin’s project to rehabilitate Stalin’s reputation.

Lithuanian political scientist Marius Laurinavicius spoke powerfully at the event. He noted that in democracies, it’s inexcusable for citizens to blame elected officials for the paths their nations take. Responsibility lies elsewhere: “It’s you,” he said, “it’s all of us.” Unlike the people of Russia, citizens of the free world can hold their politicians accountable, and it is long past time to do so.