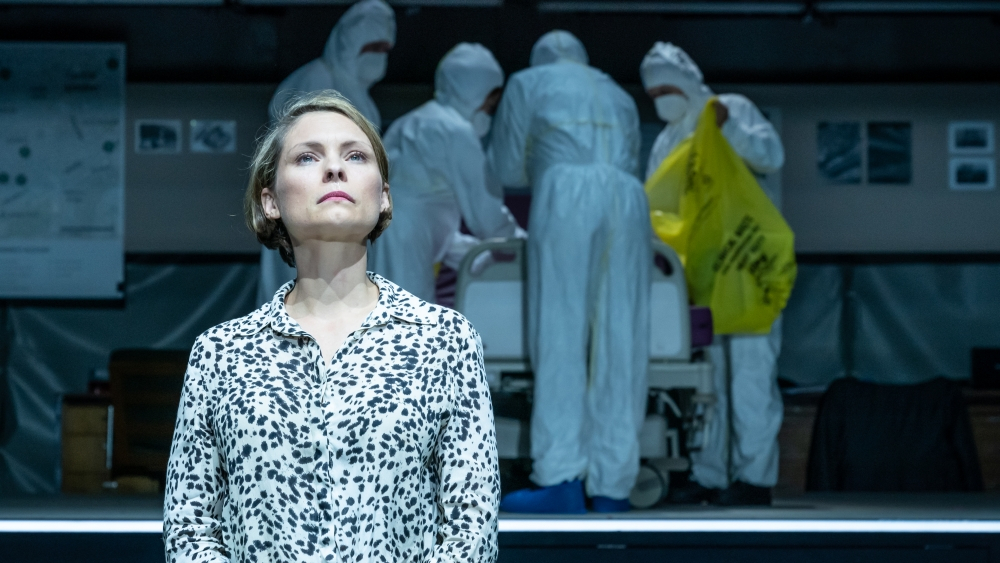 Vladimir Putin owes his power to the stage. The president’s closest advisor trained as a theatre director before applying his art to politics, and ran Russia like a staged reality, spinning so many fictions that truth itself began to blur. By scrambling the story and sowing confusion, Putin could exert absolute control.

The long-awaited latest by Lucy Prebble (“Succession,” “Enron”), “A Very Expensive Poison” applies Putinesque tactics to a true story. In November 2006, Alexander Litvinenko lay dying in a British hospital bed, propped up on white pillows as his photo was taken. His bare chest is stickered with heart monitors and his head is hairless, eyebrows and all, a symptom of radiation poisoning. A former Russian security officer — and a defector newly granted British citizenship — he had ingested tea spiked with a radioactive isotope, Polonium 210. He looks down the camera lens with a matter-of-fact stare so direct that his blue eyes seem black, a glare accepting of his death and accusing of his killers.

A Very Expensive Poison” stages journalist Luke Harding’s investigative account of Litvinenko’s life and death. Starting with his wife Marina hauling him into the hospital after two days of extreme vomiting, it rewinds to post-Soviet Russia where Litvinenko is an upstanding officer exposing the institutional corruption all around him. Escaping to London under the auspices of billionaire Boris Berezhovsky, adopting a fake identity of his own, Litvinenko’s tracked down by two bungling assassins amateurish enough to leave Polonium-stained fingerprints all across London.

This, though, is a true story told in post-truth times and Prebble disrupts with disinformation, distortion and distraction — layer on layer of Putinesque theatricality. It’s not only that she foregrounds Marina Litvinenko’s narration, with actress MyAnna Buring stepping downstage to prod our sympathies with direct address: Prebble slowly amps up the artifice altogether. Characters step out of scenes to dispute their own representation. Factual events tailspin beyond the bounds of credibility. Tom Scutt’s sets start to deconstruct themselves, exposing the flimsiness of the fictions therein, and director John Crowley’s staging slides from serious documentary theatre to all-singing, all-dancing entertainment.

The disruptor is — who else? Vladimir Putin, in a cold-blooded performance by Reece Shearsmith. “The second you start telling a story,” cautions Putin, “you start telling a lie.” In the very next breath he starts telling a story of his own: a true story, in fact, of the Moscow Theatre Siege where Chechen rebels stormed a building just like this one, taking an audience just like us hostage for four days and nights. When his special forces intervened, 130 innocents wound up dead — the carnage all captured on camera.

Effectively, Putin steps out of the stage picture — further out, even, than Burling’s Marina. At times he seems to be directing proceedings, ordering Lloyd Hutchinson and Michael Shaeffer’s fumbling assassins to clown around, or sending top-hatted and tailcoated tap dancers to storm the stage at crucial moments of the criminal investigation. Shearsmith spends the second half seated in a box above the stalls, sneering not only at Marina Litvinenko’s account, but Prebble’s script itself and even the Old Vic’s temporary toilets. It becomes almost impossible to give him the slip.

Smart as these devices are, “A Very Expensive Poison” is not nearly as wild a ride as it sounds — or, indeed, as it should be. Prebble shows us a confused narrative without actually confusing us, and her play pulls in two directions at once – arguing the effectiveness of Putin’s techniques while trying to preserve the truth. There’s something schematic about her attempt to unspool the story, and it stops short of really scrambling the truth. The result is a police procedural chasing a closed case. We already know whodunit and how. It’s hard to care and there’s little to learn.

What, then, is the real point? Most potently, it points a finger of blame at Britain itself. Litvinenko was a British citizen, murdered on British soil, and Prebble scrubs his name absolutely clear, eradicating any lingering associations with Russian spying. Her play reserves its outrage for a complacent, compliant British establishment that failed to assemble a public inquiry for fear of losing Russian investment. That, not a penful of polonium, is the very expensive poison in question. Prebble’s play seeks to make amends, but it feels too little, too late.