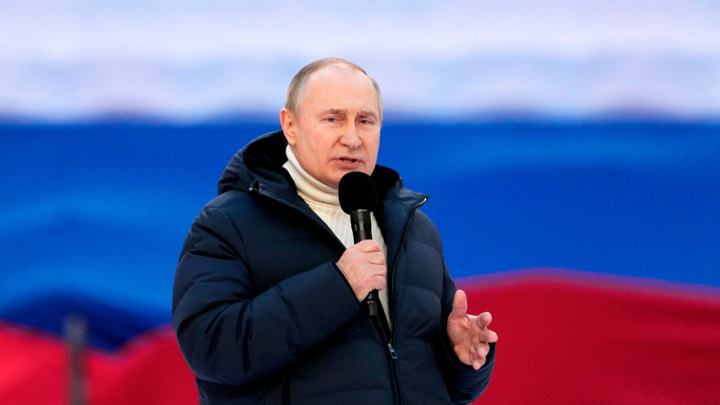 Vladimir Putin has praised Russian “unity” over what the Kremlin is calling its special operation in Ukraine during a rare public speech in the Moscow stadium that hosted the 2018 men’s football World Cup final.

“The country hasn’t seen unity like this in a long time,” Putin said, addressing a large flag-waving crowd on Friday from a stage decked out with slogans such as “For a world without Nazism” and “For our president”.

As Putin was finishing his speech, the broadcast was suddenly cut off and state television showed patriotic songs performed earlier in the day by the popular Russian musician Oleg Gazmanov. Soon afterwards, Putin’s speech, which lasted about five minutes, was re-aired from the start, with the Russian leader ending his speech and walking off stage.

The Kremlin’s spokesperson Dmitry Peskov blamed a technical failure for the cutoff. One concertgoer told Reuters that Putin left the stage after his speech, with no interruptions having taken place.

The event officially marked the eighth anniversary of Russia’s annexation of Crimea, but many of the speeches were intended to rally the country behind the current invasion of Ukraine. Moscow police said more than 200,000 people were in and around the Luzhniki Stadium, Russia’s national venue which also hosted the 1980 Olympics and Manchester United’s defeat of Chelsea in the 2008 Champions League final.

Many were seen waving flags emblazoned with the letter Z, which has gone from a military marking to the main symbol of public support for Russia’s invasion of Ukraine.

Russia has a long history of state employees being coerced to attend pro-government rallies.

Putin sought to justify his actions during his speech by repeating his unfounded claims that Ukraine was committing genocide in the Donbas region. “This really was genocide. Stopping that was the goal of the special operation,” Putin said, adding – contrary to evidence – that Ukrainian civilians had welcomed Moscow’s invading troops.

Dressed in a turtleneck and coat, Putin said the operation in Ukraine was necessary because the US was using the country to threaten Russia.

He also hailed the actions of the military fighting in Ukraine by paraphrasing a Bible saying. “There is no greater love than giving up one’s soul for one’s friends,” he said.

Before he spoke, Russia’s national anthem was played along with more modern pop hits. Putin’s favourite Russian band, Lyube, sang patriotic songs about war, sacrifice and the honour of those fighting for Russia.

Pan-Slavist poetry by Fyodor Tyutchev, whose verses warned Russians that Europeans would consider them slaves of the Enlightenment, was read out.

The OVD-Info rights group which monitors political arrests reported that at least seven independent journalists had been detained ahead of or while covering the event or a similar one in St Petersburg.