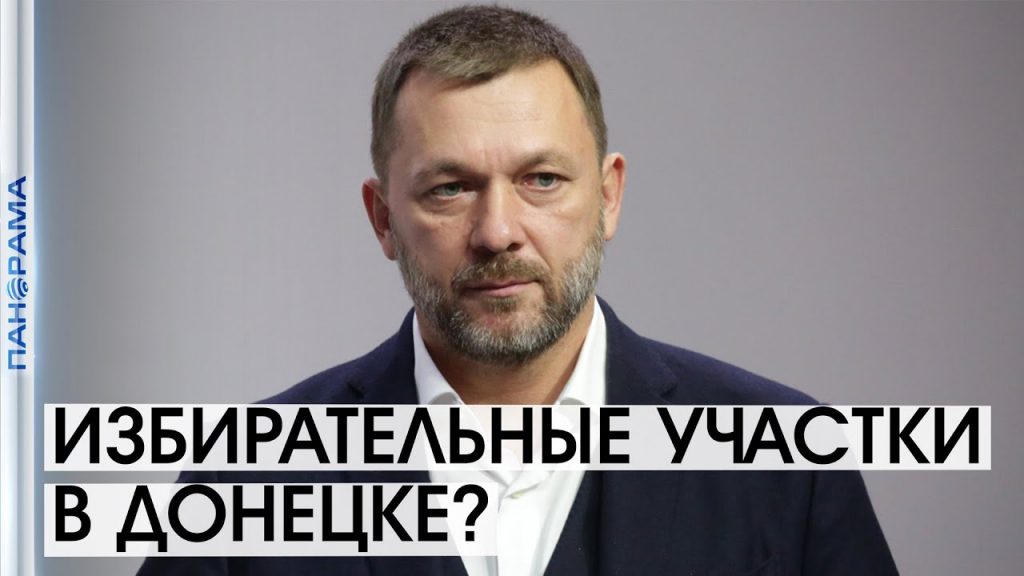 A top official in the ruling United Russia party has arrived in occupied Donbas and openly stated that an “experiment is underway at uniting this territory with Russia”.  Dmitry Sablin’s appearance at a conference for supporters of the party comes in the run-up to Russia’s parliamentary elections beginning on 17 September.  Russia is intent on ensuring that those Ukrainians illegally issued with Russian passports in the Russian proxy ‘Luhansk and Donetsk people’s republics’ [LDPR] are seen both to be taking part in Russia’s elections and to support the ruling party associated with Russian President Vladimir Putin.  While the propaganda element is important, Sablin is a member of the general council presidium of United Russia and his words should probably not be dismissed as mere election hype.

Sablin told the ‘DPR’ channel TK Union that he hoped that at the next elections, there would be Donbas electoral constituencies.  These cannot at present be achieved, he added, because there aren’t enough people with Russian passports, but this is a matter of time.  He is convinced, he said, that “what we are all waiting for will happen, we have no doubt about that and speak about it openly.  With regard to the issue of integration, in effect, an experiment is underway of uniting the territories with Russia”.

None of this is strictly surprising. Neither the Russian leaders of the so-called ‘republics’ back in 2014, nor the pro-Russian locals who took part in the seizure of power ever really concealed that they wanted Donbas (or the much larger area of Ukraine which the militants, after Putin, called ‘Novorossiya’) to join Russia.  Such plans do not, however, gel with Moscow’s attempts to push a narrative about a suppose ‘civil war’ in Ukraine and to foist ‘federalization’ on Kyiv.  They are also in direct breach of the Minsk Agreements which Russia constantly accuses Ukraine of breaching.

Putin issued his first decree on 24 April 2019, making it easier for residents of the so-called Donetsk and Luhansk ‘republics’ to get Russian citizenship.  He claimed that this was ‘a humanitarian’ move, although rumours that this was planned had been accompanied by comments about how successful such mass issue of passports had been in the Georgian regions of South Ossetia and Abkhazia.  On 17 July 2019, Putin contradicted his own ‘humanitarian’ excuse by issuing a second decree, this time making it possible for all Ukrainians in the Donbas to receive Russian citizenship according to ‘simplified procedure’, even if they live on Ukrainian government-controlled territory.  Both moves were condemned by the international community, with the EU, for example, calling Russia’s actions “an encroachment on Ukraine’s sovereignty” and in breach of the Minsk Agreement. On 10 October 2019, the EU stated that it did not recognize Russian passports issued in occupied Donbas, and that they were issuing guidelines to member states on how to recognize such documents and not recognize them.

One result of the general destruction of the economy in LDPR has been that Russia has obtained a cheap labour force, when its own population is falling rapidly.  On 10 September, Russia’s Interior Ministry announced that a draft presidential decree had been prepared on making changes to the so-called State Program on providing assistance for the voluntary resettlement in the Russian Federation of compatriots living abroad.  The planned amendments will enable “compatriots permanently resident in the territory of particular parts of the Donetsk and Luhansk oblasts of Ukraine the right to apply to take part in this State program.

Presumably, the original aim of such a program was to enable people resident abroad to return to Russia, which would otherwise, without registration and a place to live, be difficult.  Here the term ‘compatriot’ is very misleading since Russia is using the issue of its citizenship to Ukrainians as an element of its aggression against Ukraine.  Those Donbas residents who believed the citizenship would give them benefits appear to have been disappointed.

As reported, on 20 July 2021 Russia’s Central Election Commission issued a decision allowing Donbas residents with Russian citizenship to ‘vote’ online in Russia’s parliamentary elections.  Even without the participation of Russia’s pseudo citizens from Donbas, its elections would be illegitimate since they are being held in occupied Crimea and because Russia has either excluded, forced into exile or imprisoned virtually all opposition candidates. Like in Soviet times, the Kremlin’s main concern is turnout for an event whose result is essentially known in advance.  Moscow clearly wants interest in the Russian elections to be visible in ‘LDPR’ and for the ruling party to receive support. Soon after the decision, Ukraine’s Centre for Journalist Investigations reported that ‘Russian citizens of LDPR’ were being enrolled in Russia’s ruling ‘United Russia’ party essentially en masse.

A mass campaign began in ‘LDPR’ to persuade those who had received Russian citizenship to obtain SNILS [an Individual Insurance Account Number].  The propaganda was clearly aimed at convincing people that the insurance number would entitle them to Russian social benefits, whereas the only ‘benefit’ (to the Russian authorities) was that they were able to vote online.

In fact, that does not appear to have produced lots of voters and Radio Svoboda Donbas Realii reported on 14 September that there is very little enthusiasm in ‘LDPR’ for taking part in the elections, with some even trying to leave the area during the voting period from 17-19 September.   For many, however, especially public service workers, participation will be compulsory, primarily through being bused to the Rostov oblast in Russia to vote. Individuals asked about their participation admitted that they needed to do so if they wanted to keep their jobs.