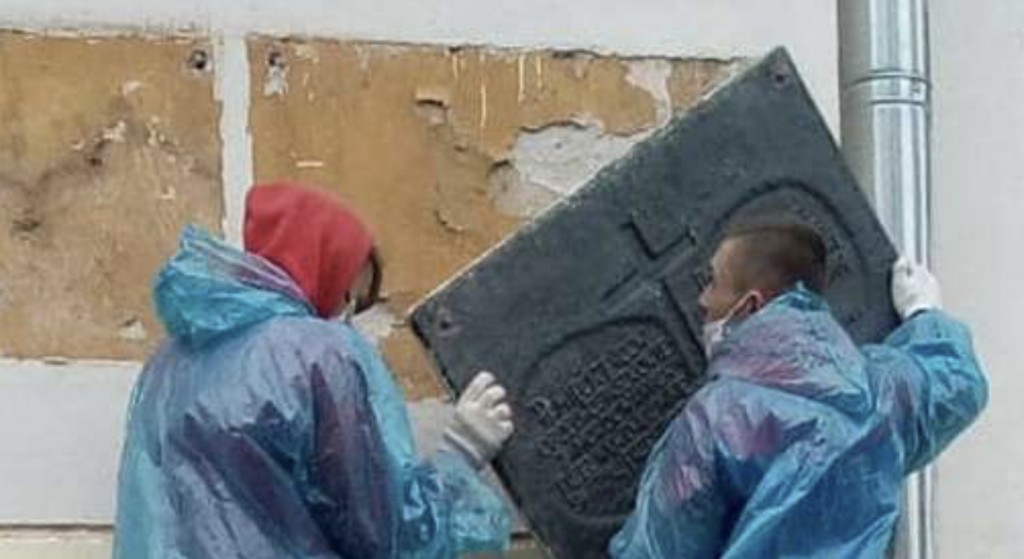 On the eve of the 75th anniversary of the end of World War II, Russian officials, acting on an order from the prosecutor’s office,  have removed plaques commemorating victims of the Terror and Polish officers executed by the NKVD in 1940, while the Soviet Union was still collaborating with Nazi Germany.  This may have been a regional initiative, but it is very much in line with Russia’s aggressive attempts under President Vladimir Putin to blur or rewrite the darkest pages of Soviet history.

Two memorial plaques, erected in 1991, were removed from the former NKVD building in Tver on 7 May.  One read: “In memory of the tortured. In the 1930s-1950s this was the Central NKVD – MGB for the Kalinin oblast and its internal prison”, the second: “In remembrance of the Poles from the Ostashkov Camp, murdered by the NKVD in Kalinin.  As a warning to the world”.

The 6,300 Poles killed at the Ostashkov Camp were from the 22 thousand Polish military and police officers and members of the intelligentsia taken prisoner after the Soviet Union invaded Poland on 17 September 1939 and murdered in cold blood in April and May 1940.  This heinous crime is known as the Katyń Massacre, after the executions carried out in the forest at Katyn, near Smolensk, however the Polish officers were also executed in prison camps at Kozelsk, Starobyelsk, near Kharkiv in Ukraine and in Belarus.

The Nazis first reported finding a mass grave at Katyn in April 1943, with the Soviet authorities trying then and for decades later to claim that the graves were of victims of Nazi Germany.  It was only in 1990 that Soviet culpability was finally admitted.

If, when it came to Soviet victims of Stalin’s Terror,  there was mounting openness until Putin’s regime, the same cannot be said for Russia’s attitude to the Katyń Massacre, which has always been much too secretive.

Under Putin and the FSB, whose power he reinstated, there has been a pronounced move away from historical honesty and towards the ‘rehabilitation’ of Stalin and of the Cheka, or first Soviet secret police and all its successors.  Two historians of the Terror, Yuri Dmitriev and the late Sergei Koltyrin, who died on 2 April in prison, have been imprisoned on politically motivated charges, and the renowned Memorial Society is under constant attack.

A Levada Centre poll in March 2019 showed a record level of approval for Stalin.  71% of Russians said that they have a positive attitude to his role in their country’s history, with just over half the population saying that they view a dictator responsible for the death of millions “with respect”.

Putin’s use of Victory Day and glorification of the Soviet war against Nazi Germany began earlier, but became quite pathological after Russia’s invasion of Crimea and military aggression in eastern Ukraine.

It is probably the need to maintain this myth about the glorious Soviet army under the wise leadership of Comrade Stalin that has led to extraordinary attempts, including from diplomats, to blame Polandfor WWII and to justify the Molotov-Ribbentrop Pact which, in its secret protocols, agreed to carve up Poland.

The reason is self-evident.   Attempts to present the Soviet Union as having freed the world from ‘fascism’ are not well-served by the brutal facts regarding Stalin’s pact with Hitler and collaboration which only changed on 22 June 1941 because of the Nazi invasion.

Since the facts are so clearly in the way, repressive measures have been used to avoid them seeing the light of day.  The most grotesque of these was the prosecution of Vladimir Luzgin from Perm for reposting a text which stated that both Nazi Germany and the Soviet Union had invaded Poland in 1939.  This was not some anomality from a provincial court since the appeal against Luzgin’s conviction went to the Supreme Court. This effectively ruled that the Soviet Union did not invade Poland in 1939.  The Supreme Court agreed with the first court that the offending paragraph constituted “the public denial of the Nuremberg Trials and circulation of false information about the activities of the USSR during the years of the Second World War”.  It issued its ruling on 1 September 2016,  on the 77th anniversary of Nazi Germany’s invasion of Poland, 17 days before the Soviet Union also invaded, as Luzgin’s text had said.