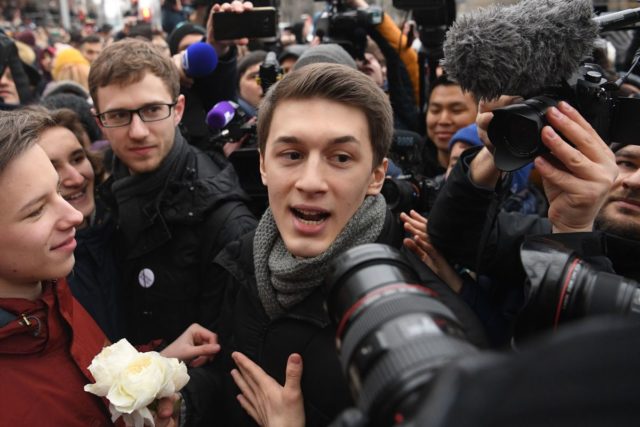 After the North Atlantic Treaty Organization’s (NATO) contentious jubilee summit in London last week (December 3–4) (see EDM, December 2), the fulcrum of European politics has shifted to two different summits, in which President Vladimir Putin was supposed to perform foremost roles. The first one took place in Sochi, on December 7, with Putin and Belarusian President Alyaksandr Lukashenka meeting to discuss the prospects of closer bilateral integration of their two countries. The second high-level event occurred in Paris today (December 9), with the purpose of negotiating a settlement for the slow-burning conflict in Ukraine’s eastern Donbas, within the so-called “Normandy format,” which involves the leaders of Russia, France, Germany and Ukraine. Over the past few days however, political passions in Moscow were ignited not by the serial summit proceedings, but by local court cases, in which seven Russian opposition activists were tried for alleged extremism (Kommersant, December 7). Consequently, Yegor Zhukov, a student from the prestigious Moscow Higher School of Economics, who showed remarkable composure and dignity under harsh pressure and became a new face of the protest movement.

The case against Zhukov revolves around his self-made video posts on YouTube, but the falsification of the prosecutor’s accusations were particularly crude (Novaya Gazeta, December 5). Expecting a sentence of up to four years of hard labor, Zhukov nevertheless refused to admit any guilt; and in his last words before the court, he spoke calmly and sincerely about the importance of personal responsibility—and about love (Meduza, December 4). His remarks intensely resonated over Russian online social networks, alarming the “curators” in the Kremlin that they risked triggering a new wave of protests (Ezhednevny Zhurnal, December 6). The judge announced a suspended sentence of three years. And yet, Zhukov, though elated to be set free, told the crowd of supporters the guilty verdict did not and could not amount to a true victory (RBC, December 6). Many prominent figures in the Russian opposition camp—from anti-corruption campaigner Alexei Navalny to political exile and former Yukos CEO Mikhail Khodorkovsky—condemned the trial as a farce and a travesty of justice (New Times, December 6).

The authorities are, indeed, trying to avoid excessive brutality, instead applying the tactics of “smart” repressions to discourage protest activity while permitting the public outrage over abuse of police power and the legal system to cool (Forbes.ru, December 6). But the younger generation is less receptive to the state’s propaganda, and it wants a brighter future compared to the current inescapable stagnation; the Kremlin can neither effectively communicate with nor corrupt these youths with promises of “patriotic” careers (Znak.com, December 6). The peculiar reference in the judge’s verdict to Zhukov’s education in political science signifies the power-holders’ inability to invent any convincing discourse on their privileged access to wealth and portends a clampdown on liberal arts education (Newsru.com, December 6). Indeed, the newly approved “foreign agents” law targeting individuals implicated in unauthorized cooperation with Western non-governmental organizations (NGO) or media outlets makes it possible for the authorities to inter alia purge universities and expel unduly liberal professors (Moscow Echo, December 3).

The unexpectedly “soft” punishments meted out to Zhukov and other “extremists” may have been ordered by the Kremlin in order to avoid negative publicity on the eve of the Paris summit, which Putin presumes to be crucially important for his new “peace offensive” in Europe (Rosbalt, December 6). The atmosphere was already somewhat spoiled by the expulsion from Germany of two Russian spy-diplomats, implicated in yet another assassination (see EDM, December 5), but Putin sought to neutralize this scandal by inviting a score of German business elite to his residence in Sochi to discuss the prospects of post-sanctions cooperation (Kommersant, December 7). His main hopes of relaunching fruitful dialogue with European counterparts are, nevertheless, pinned on the ambitions of French President Emmanuel Macron to assume a leadership role in international affairs (see EDM, December 5), despite the latter’s obvious inability to sort out his domestic agenda in strike-paralyzed France (Republic.ru, December 5). The only matter that stands in the way of Putin’s maneuvering is the continuing Russian aggression, and the Kremlin leader is apparently ready to show some flexibility regarding the Donbas war zone in order to remove the annexed Crimea from any further discussions (RBC, December 6). Putin expects to outplay Ukraine’s inexperienced President Volodymyr Zelenskyy, who cannot be certain of how solid his support is in France and Germany (see EDM, December 5), not to mention in the impeachment-obsessed United States. But one sure constant for him remains the furious opposition from his rivals, Petro Poroshenko and Yuliya Timoshenko, to any compromises the sitting Ukrainian president might find necessary to accept (Nezavisimaya Gazeta, December 4).

One person Putin has never been able to outplay is Belarus’s President Lukashenka. The Russian government has been exerting heavy pressure on Minsk using economic leverage—first of all, the oil and natural gas supply—in order to enforce a set of “road maps” for further integration, which would amount to curtailing Belarusian sovereignty (Kommersant, December 6). Opposition in Belarus, while weakened by many years of harsh repressions, managed to raise public concerns about the looming loss of statehood (Novaya Gazeta, December 5). Lukashenka regained the initiative by addressing the parliament and asserting, in his trademark manner, that he was not “some kid, who has worked as president for three–four–five years” and that no steps in political union-building were planned (Nezavisimaya Gazeta, December 5). His meeting with Putin lasted more than five hours: the dinner menu was described extensively to the media, but reporting has been silent on the substance of the purported “progress” achieved (RBC, December 7). A new heads-of-state meeting was announced for December 20. But it is highly unlikely Lukashenka will agree to any reduction of his control over the political/police machine that runs Belarus.

Putin may presume that his own controlling machine is more powerful; and Zhukov confirmed autocracy is the only institution in Russia that enjoys sustained cultivation from the authorities. The structures of this monopoly on power, however, are thoroughly corrupt, leaving the autocrat at the top caught in a pseudo-power trap, where everything appears under control but nothing works. The regime can achieve economic “prosperity” only by doctoring statistical data (see EDM, June 10). It needs to ensure the effectiveness of “patriotic” propaganda—but cannot execute efficient censorship of social networks or subdue the Internet. The words of a young student carry more weight with members of his generation than volumes of official self-glorification; and his confidence in Russia’s future, free from oppression and corruption, undercuts all political designs in the Kremlin for preserving Putinism indefinitely.