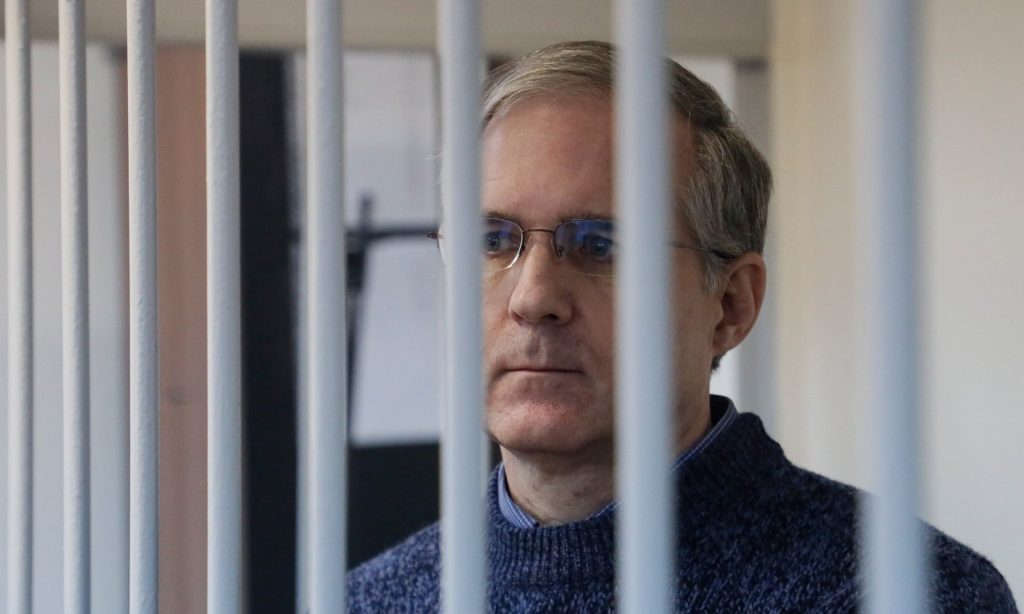 Relatives of foreign citizens in Russian prisons have accused Moscow of engaging in hostage diplomacy and say they are concerned about their family members being used as bargaining chips to exchange for Russians detained abroad.

The brother of Paul Whelan, an American arrested on spying charges 11 months ago who returns to court on Tuesday, said he believed Russia was drawing out his case to “see what they can get from the United States for him”.

David Whelan said: “I think it’s absolutely a political case at this point.” He said his brother had warned family members not to come to Russia to attend his hearings because of concerns that they could also be detained.

Paul Whelan was first detained last December, allegedly in possession of a USB drive holding sensitive information. He has complained of mistreatment in prison and said Russia thinks it “caught James Bond on a spy mission. In reality, they abducted Mr Bean on holiday.” He has claimed he was set up by a Russian friend employed by the FSB security service.

Whelan is expected to appear at an appeal hearing on Tuesday against his confinement to Russia’s notorious Lefortovo prison. At a hearing last month, he called his case “a hostage situation”.

Vladimir Zherebenkov, Whelan’s lawyer in Russia, said: “If Trump releases one of ours then I’m sure that ours will release someone too. It’s high politics. I want to say that our president is absolutely sane about this, Putin sees this all rather calmly. Why not [make a trade]?”

Whelan’s is one of several prominent cases of foreigners being held in Russia for whom Moscow is expected to request a swap.

In April, Russian authorities arrested an Israeli woman, Naama Issachar, after allegedly discovering nine grams of marijuana in her luggage while she was on layover at a Moscow airport while travelling from New Delhi to Tel Aviv.

Lawyers expected she would be sentenced to a month in jail for drug possession and then deported. But prosecutors unexpectedly upgraded the charges against her to drug smuggling, and last month she was sentenced to seven and a half years in prison.

Since her arrest, Israeli officials and Issachar’s family members have said they were approached by intermediaries linking her case to that of Alexei Burkov, a Russian citizen arrested by Israel in 2015 at the request of the US.

Burkov was charged with running a criminal online marketplace that dealt in stolen credit card numbers, and was thought to have compromising information about the Russian security services’ links to cybercriminals.

Israel extradited Burkov to the US last week, days after Isaachar’s mother withdrew a petition to stop the extradition in an effort to organise a trade for her daughter.

“Naama will not be a pawn for the Russian hacker and his people,” Yaffa Isaachar said in a statement. “I pray that my decision will not aggravate Naama’s situation in Russian prison, and I fully trust in the president and the prime minister as they continue to work with the Russian president to bring about Naama’s immediate release.”

Relatives of Whelan said they saw similarities between the cases. “Their continuing to hold him and slow-walk this whole process says a whole lot more about their interest in trying to maximise Paul’s value to the Russian Federation,” David Whelan said. He compared Russia to countries such as China and Iran that had also sought to “extract value from foreign citizens”.

Zherebenkov said the process for a trade could begin only after Whelan was tried and probably convicted. The trial would probably begin in May, he said.

Even if Russia were ready to make a trade, it is unclear for whom it would be. One possibility was thought to be Maria Butina, a gun advocate who was convicted in the US of acting as a clandestine foreign agent. She was deported back to Russia last month.

Whelan said that Butina, who received an 18-month prison sentence, “was always money that the Russians were going to get back”. Whelan’s potential sentence in a Russian prison is 10 to 20 years.

Another option is Konstantin Yaroshenko, a Russian pilot convicted in 2011 of conspiring to smuggle cocaine into the US and sentenced to 20 years in prison. Russia has called repeatedly for his release. In July, a Russian foreign ministry official played down suggestions that Whelan could be swapped for Yaroshenko, saying Whelan would first have to be convicted before any trade could be discussed.

The process could take several years. Last Friday, Russia released a Norwegian, Frode Berg, in an unusual three-way spy swap that included two Lithuanians and two Russians. Berg was arrested in December 2017 and accused of acting as a courier for Norway’s spy services. He spent 23 months in Lefortovo, where Whelan is being held.

Canadian officials who visited Whelan in jail last week said he had lost weight and had not had an independent medical assessment. Russian newspapers published leaks from investigators claiming that Whelan was believed to have sought contacts among former members of the security services since first visiting Russia in 2007.

“Whelan is of great interest for them,” said Zherebenkov. “From the political point of view, from the point of view of the intelligence services.”

… we have a small favour to ask. More people, like you, are reading and supporting the Guardian’s independent, investigative journalism than ever before. And unlike many news organisations, we made the choice to keep our reporting open for all, regardless of where they live or what they can afford to pay.

The Guardian will engage with the most critical issues of our time – from the escalating climate catastrophe to widespread inequality to the influence of big tech on our lives. At a time when factual information is a necessity, we believe that each of us, around the world, deserves access to accurate reporting with integrity at its heart.

Our editorial independence means we set our own agenda and voice our own opinions. Guardian journalism is free from commercial and political bias and not influenced by billionaire owners or shareholders. This means we can give a voice to those less heard, explore where others turn away, and rigorously challenge those in power.

We hope you will consider supporting us today. We need your support to keep delivering quality journalism that’s open and independent. Every reader contribution, however big or small, is so valuable. Support The Guardian from as little as €1 – and it only takes a minute. Thank you.