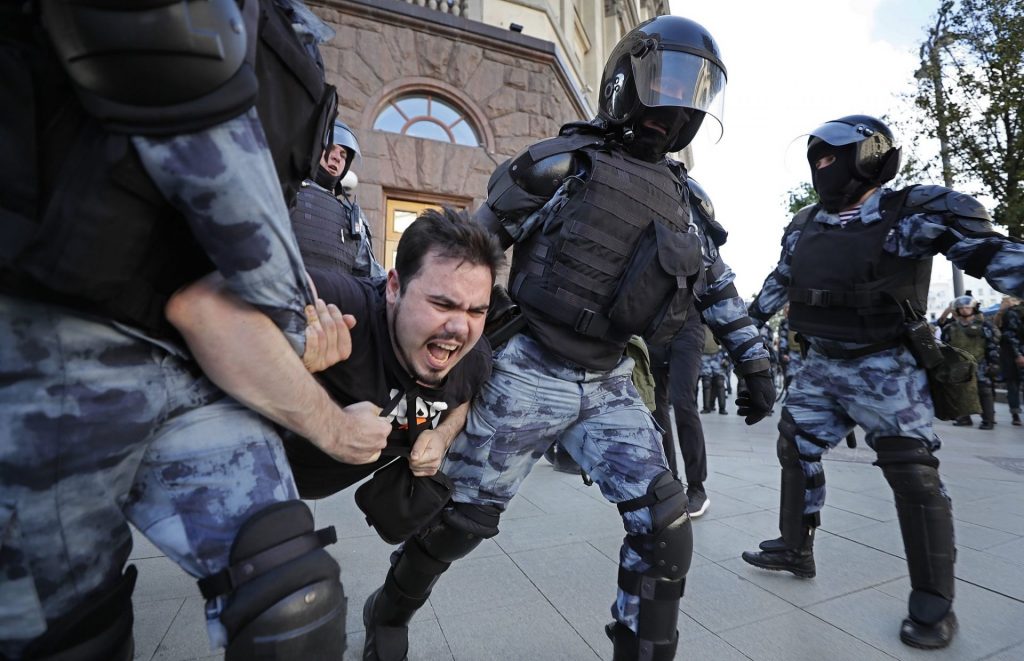 A wave of arrests against journalists, opposition activists, doctors and religious believers raises a question: Is this a police state in the making or just a highly dysfunctional one? 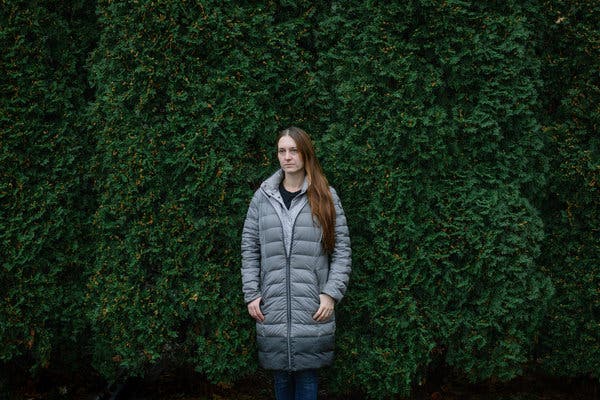 Svetlana Prokopyeva, a freelance journalist in Pskov, Russia, is facing up to seven years in jail after being accused of “publicly inciting terrorism” with her commentary.Credit…Ksenia Ivanova for The New York Times

PSKOV, Russia — After a teenager blew himself up inside a branch of Russia’s secret police near the Arctic Circle late last year, a freelance journalist hundreds of miles to the south drew what she thought was “an obvious and banal” conclusion in her weekly radio commentary.

Her conclusion — that relentless repression by Russia’s security forces is radicalizing Russian youth — now has the journalist, Svetlana Prokopyeva, facing up to seven years in jail for “publicly inciting terrorism.”

Even the Kremlin’s own Human Rights Council, protested that Ms. Prokopyeva had done no such thing and, from her home office in the ancient Russian city of Pskov, had been merely trying to explain the forces that push people toward extreme acts, not to encourage them.

Yet, the case rolls on, adding a Kafkaesque twist to the increasingly assertive actions of a security apparatus seemingly bent on proving the Kremlin’s harshest critics right when they say that Russia has taken a dangerous turn as President Vladimir V. Putin serves out what is supposed to be his final term.

The prosecution of Ms. Prokopyeva and other harmless critics comes against the backdrop of foreboding and uncertainty over what might follow Mr. Putin, who has anchored the system for nearly two decades. Even the question of whether he will depart as scheduled in 2024 is the subject of speculation, since he remains more popular than any opponent despite a dip in his ratings.

The resulting jitters, exacerbated by economic stagnation and mostly small but widespread protests that erupted this summer, have left Russia’s numerous law-enforcement bodies scrambling to prove their mettle against potential threats, no matter how puny, and secure their future in a country they all view as a fortress besieged by enemies at home and abroad.

In the aftermath of the protests, which were broken up with often brutal force by the authorities, law-enforcement agencies last week conducted nationwide raids on news outlets critical of the Kremlin and on the homes and offices of people affiliated with the opposition leader, Aleksei A. Navalny.

Russian riot police officers detained a protester during a liberal opposition demonstration in front of the Moscow mayor’s office in July.Credit…Yuri Kochetkov/EPA, via Shutterstock

But, as Ms. Prokopyeva noted, cracking down so hard has often fueled anger and further unrest. When men armed with hatchets — they were dressed in civilian clothes but backed up by riot police officers — broke up a tiny protest in Siberia last month over the treatment of a shaman, their violent action set off the biggest outpouring of anger in the remote region near the border with Mongolia in years.

The widening and often-hard-to-fathom crackdown has even reached aging Soviet-era dissidents with scant means and few followers.

The Justice Ministry, for example, demanded last week that a shoestring human rights group led by Lev A. Ponomaryov, 78, be disbanded. Burly police officers then snatched the leader of a doctors’ association, an eye specialist, off the street, charging her and an assistant, a gynecologist, with “disobedience” to law enforcement authorities after a flurry of protests by medical workers.

On Monday, the Kremlin announced an overhaul of the Human Rights Council, already a toothless body but one that had on occasion spoken up for victims, including Ms. Prokopyeva, of Russia’s often lawless security apparatus. The most independent-minded members of the council were purged in favor of loyalists from the state news media and others known for their obedience.

An antigovernment rally in Ulan-Ude, Siberia, last month. The demonstrations were fueled by violent action against a tiny protest over the treatment of a Shaman.Credit…Maxim Babenko for The New York Times

“Their logic is the same as terrorists: they want to create fear,” said Lev Shlosberg, an elected member of the Pskov region council and regional leader of Yabloko, Russia’s last remaining pro-Western political party with national reach. “By sending just one person to jail they can terrorize a million others.”

Maxim Kostikov, the editor in chief at the radio station in Pskov that broadcast Ms. Prokopyeva’s commentary last October, said the decision to prosecute the 40-year-old journalist made no sense “by any normal logic.”

He estimated that “maybe three or four hundred people” had listened to the original broadcast and perhaps a few hundred more had read the text of Ms. Prokopyeva’s commentary on a Pskov news portal. But now, thanks to the criminal case against her, “the whole world knows what Svetlana wrote.”

But whether turning a previously obscure provincial journalist into a national cause célèbre is counterproductive, said Ekaterina Schulmann, one of the purged members of Mr. Putin’s Human Rights Council, “depends on your understanding of productivity.”

The logic driving actions by the Federal Security Service, known by its Russian initials F.S.B., and other arms of a vast security apparatus riven by feuds over turf and money, Ms. Schulmann said, does not flow from any master plan to terrorize Kremlin opponents but rests on self-interested bureaucratic calculation.

“Each body has to show its own results and doesn’t care about the overall picture,” Ms. Schulmann added, noting that by pursuing Mr. Prokopyeva, the F.S.B. “now has a nice juicy criminal case it can put in its reports.”

The Federal Security Service building in Moscow. Critics say the agency is behind a nationwide crackdown on the Kremlin’s opponents. Credit…Sergey Ponomarev for The New York Times

Asked about the case this month, Mr. Putin’s spokesman, Dmitri S. Peskov, said Mr. Putin “is of course aware of it, but this is not a topic for the president.”

Ms. Prokopyeva, in an interview in Pskov, said she had been questioned repeatedly by investigators from the Investigative Committee, Russia’s version of the F.B.I., about why she wrote what she did and whether anyone had helped or had given her instructions. But she said she believed the case had been driven from behind the scenes by the F.S.B., which has overall responsibility for combating terrorism.

The agency’s motive, she said, was simple: “revenge” for her suggestion that Russia’s security system is creating the crimes it is supposed to prevent.

“They want to defend their immovable position in this country,” she said, dressed in a black T-shirt emblazoned with the words “We Will Not Shut Up” in different languages.

Ms. Prokopyeva has been in the sights of Russia’s security services since 2014, when, as editor of Pskovskaya Guberniya, her hometown’s only independent newspaper, she oversaw coverage exposing another “obvious” truth: that Russian soldiers have been fighting and dying in eastern Ukraine.

Exhibit A in the criminal case against Ms. Prokopyeva is an 800-word text she wrote that compared the teenage bomber in the northern city of Arkhangelsk — who killed nobody but himself — to young Russians in the 19th century who joined “People’s Will,” an anarchist group responsible for the assassination of Czar Alexander II in 1881.

“Cruelty breeds cruelty,” the journalist said in her radio commentary, broadcast on the Pskov affiliate of Ekho Moskvy, a Moscow station. Linguists commissioned by investigators to study the text said her commentary contained “signs of incitement to terrorism,” though experts hired by her lawyers found no such “signs.”

The grave of Sgt. Vladislav A. Barakov, a soldier sent to fight in Ukraine, states the day he died, Aug. 24, but not where or how.Credit…James Hill for The New York Times

Mr. Prokopyeva’s view that security services responsible for keeping Russia safe are contributing to its ruin clearly hit a raw nerve in a system that — replete with grand pageantry and endless praise of Mr. Putin as guardian of Orthodox Christianity and Russia’s status as a great power — is looking more and more like a throwback to the czarist era.

Drawing attention to the violent side of Russian history, particularly to an anarchist group that murdered a czar, is highly sensitive at a time when Mr. Putin increasingly points to Russia’s past — scrubbed of assassinations and bloody strife — to inspire patriotic confidence in the future.

In the past year, at least nine people besides Ms. Prokopyeva have faced criminal charges — with one person sent to jail for two and a half years — over comments they made about the teenager, Mikhail Zhlobitski, 17, who blew himself up. Also caught up in the rolling crackdown against supposed “extremists” have been scores of peaceful and often older followers of Jehovah’s Witnesses, a Christian denomination that Moscow outlawed in 2017 as a security threat.

Ms. Prokopyeva, who last month was formally charged with inciting terrorism, said she had written her text in just a couple of hours and never imagined it would stir such a ruckus. “It wasn’t anything special or original,” she said, adding that anyone who went to school, as she did, in the Soviet Union, where textbooks celebrated 19th-century anarchists as precursors of Lenin’s revolutionaries, knows how czarist repression fed violence.

Mr. Zhlobitski, she wrote, was not simply a lone lunatic but a warning that the authorities need to heed if they want to avoid following the example of Russia’s doomed czarist order. “The ruthless state gave birth to a citizen who made death his argument,” she wrote, noting that the authorities had sealed off peaceful avenues of dissent for young people like Mr. Zhlobitski.

She ended her commentary with what she had thought was a clear message that she did not want others to follow the teenager’s example: “Let’s hope he is an exception.”

Mr. Zhlobitski gave his own explanation for his turn to violence shortly before he set off his homemade bomb in the Arkhangelsk office of the F.S.B. Using the alias “Sergei Nechayev,” a violent 19th-century revolutionary, he posted a message online saying he wanted to strike at the F.S.B. because it “fabricates cases and tortures people.”

A teenager set off a homemade bomb in the Arkhangelsk office of the headquarters of the Federal Security Service, left, last year.Credit…Russian Investigative Committee, via Associated Press

Mr. Putin’s Human Rights Council, shortly before this week’s purge of its more outspoken members, noted in a statement that the question of why people turn to militancy was “one of the most acute and debated” issues in criminology, and that journalism should not be criminalized. The council said it had “carefully studied” Ms. Prokopyeva’s text and “did not see in it any signs of justification of terrorism.”

Denis Kamalyagin, the editor of Pskovskaya Guberniya, Ms. Prokopyeva’s old newspaper, described the case as a “terrible stupidity.” It is not, he said, “a sign of how strong our authorities feel but of their weakness. They can’t act like a normal European government. All they can do is frighten people.”

Even this, he added, no longer works.

“They have created a new generation that is no longer scared of them,” he said.