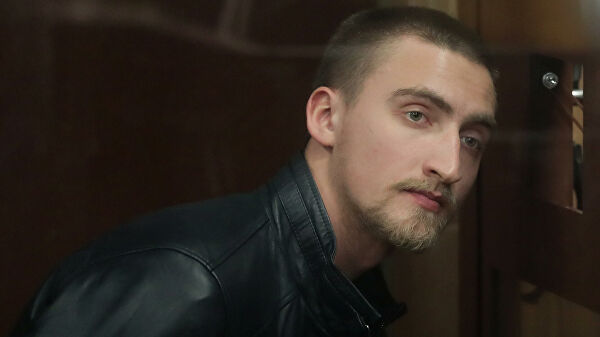 A growing number of Russian entertainers on Tuesday joined in a rare show of defiance and solidarity, in support of an actor who they say was wrongfully convicted of resisting arrest during an anti-Kremlin rally, despite clear evidence in his favor, and sent to prison. The protest demonstrated the power of social media, where the actors and others published their video statements in support of the defendant, Pavel Ustinov, spreading the word widely even as state-run television largely ignored the case. Publicly calling out injustice in the legal system is unusual in Russia and carries real risks; most of the actors speaking out work in government-sponsored theaters and appear in state-supported films. On Monday, a court in Moscow sentenced Mr. Ustinov, a 24-year-old actor, to three and a half years for assaulting a police officer and dislocating his shoulder while being arrested at a protest rally on Aug. 3 in central Moscow. But in a video of the arrest, published online, Mr. Ustinov is seen walking on a busy public plaza with a phone in his hand, when four police officers in riot gear walk quickly up to him, push him to the ground, beat him with rubber batons and then lead him away. It is not clear from the video why they singled him out. The video sparked public outrage, but the judge refused to consider it as evidence in his trial, which took only two days. In his testimony, Mr. Ustinov, who has played small roles in Russian films, pleaded innocent, saying that he was a bystander, not a protester, who was attacked by members of the national guard. He was the sixth person to be sentenced to a significant prison term in cases stemming from a wave of anti-Kremlin protests in Moscow this summer. Aleksandr Pal, a film actor, started the campaign to support Mr. Ustinov, calling it a flash mob, and invited other actors to join. “This is a completely trumped-up case,” Mr. Pal said in his video statement, referring to Mr. Ustinov by a nickname. “From the video of his arrest it is clear that Pasha wasn’t resisting national guard servicemen and riot police, that he wasn’t chanting any slogans.” Mr. Pal’s call was picked up by Nikita Efremov, an actor with Moscow’s Sovremennik theater and a member of a famed family of actors. “I remember well the case of Ivan Golunov, I was amazed by how journalists got united,” he said in a video, adding “I think we can do that too.” In June, Mr. Golunov, a prominent Russian investigative reporter, was arrested in central Moscow and charged with drug trafficking. The arrest swiftly prompted protests by journalists and their supporters, who picketed the Moscow police headquarters. In a stunning reversal, the charges were dropped days later, and several high-ranking police officers were fired. “In terms of corporate solidarity, this is not the first time it is being expressed,” Ekaterina Schulmann, a political scientist in Moscow and a member of President Vladimir V. Putin’s Council for Civil Society and Human Rights, told Kommersant, a Russian newspaper. “Any unity is an effective instrument.” Mr. Golunov’s case raised hopes of a new Kremlin flexibility in the face of public outrage. But weeks later, the police began making mass arrests during the street protests in Moscow — more than 2,000 overall. Speaking to reporters on Tuesday, Mr. Putin’s spokesman, Dmitri S. Peskov, repeated his usual line that the Kremlin had nothing to do with the court system and that Mr. Ustinov had the right to appeal if he disagreed with the sentence. “Of course, the president is aware and received all information about everything,” Mr. Peskov said. “However, the president also cannot either react or influence the court’s decision.” Replicating the slogan used by Mr. Golunov’s supporters, many actors posted “I/We are Pavel Ustinov” on their social networks. Just as in the Golunov case, the show of support for Mr. Ustinov spread to some Kremlin-friendly commentators, including Tina Kandelaki, a television producer, and Maksim Galkin, a popular television host and comedian. “This is a huge reputational blow,” Mr. Galkin said. “This is a blow to our courts, and not the first one,” he said, adding, “this is a blow to our government too.” Nikita Kukushkin, an actor with the Gogol Center, an avant-garde theater in Moscow, made a plea for actors to stop working with the government and “feeding this system.” “I call on you not to cooperate with film companies, producers, and directors that offer you projects that are clearly propaganda,” Mr. Kukushkin said. “Don’t take part in productions or put on plays in theaters that were given to directors only because they expressed their loyalty to the government.” Several leading theaters in Moscow, including Satirikon, made statements in support of Mr. Ustinov at the ends of their shows on Monday. “It turned unbearable to remain silent,” said Yulia Snigir, a popular film actress. “You cannot put an innocent man in jail.”